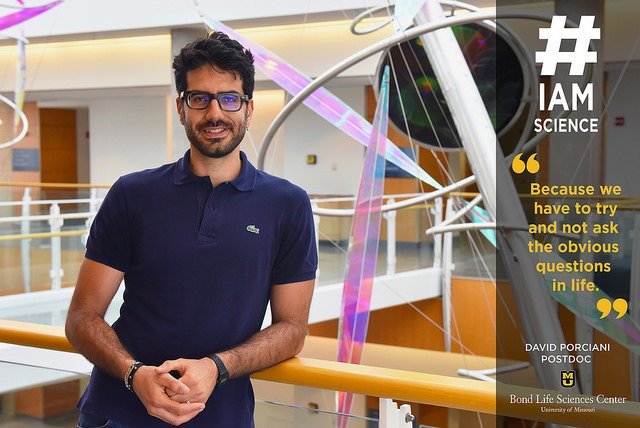 More than 100 years ago, German Nobel laureate Paul Ehrlich popularized the “magic bullet” concept—a method that clinicians might one day use to target invading microbes without harming other parts of the body. Although chemotherapies have been highly useful as targeted treatments for cancer, unwanted side effects still plague patients. Now, researchers at the University of Missouri have demonstrated that specialized nucleic acid-based nanostructures could be used to target cancer cells while bypassing normal cells.

“Most of the therapeutic drugs are not able to discriminate the cancer cells from healthy cells,” said David Porciani, a postdoctoral fellow in Donald Burke’s lab at the MU Bond Life Sciences Center. “They are killing both cell populations (healthy and malignant), and the treatment can have harsher side effects than the cancer itself in the short term. We are developing ‘smart’ molecules that can bind with receptors that are found on the surface of cancer cells, thus representing a cancer signature. The idea is to use these smart molecules as vehicles to deliver chemotherapeutic drugs or diagnostics.”

Using a molecular process that mimics a highly-accelerated form of natural evolution, Porciani and his team sought out nucleic acid ligands, or aptamers. Because of their three-dimensional structures, aptamers can be trained to bind to certain target molecules with high affinity and selectivity. When the target is a cancer-associated receptor, these aptamers can be used as molecular tools to recognize specifically diseased cells.

The team then “loaded” the aptamers with large, fluorescent RNAs generating nucleic-acid nanostructures. Upon incubation with target cancer and non-target cells, only malignant cells were illuminated by the nanostructure showing that the structures had correctly bonded with their intended targets.

“Next steps for our studies are to prove that these aptamers can be loaded with therapeutic molecules that specifically target and treat cancer cells leaving normal tissues untouched,” Porciani said. “While aptamers have been proven in the past as tools to deliver small drugs, our method paves the way to deliver even larger and potentially more powerful RNA-based drugs possibly creating that ‘magic bullet’ that Erhlich described in the last century.”

This research highlights the power of translational precision medicine and the promise of the proposed Translational Precision Medicine Complex at the University of Missouri. The TPMC will bring together industry partners, multiple schools and colleges on campus, and the federal and state government to enable precision and personalized medicine. Scientific advancements made at MU will be effectively translated into new drugs, devices and treatments that deliver customized patient care based on an individual’s genes, environment and lifestyle, ultimately improving health and well-being of people.