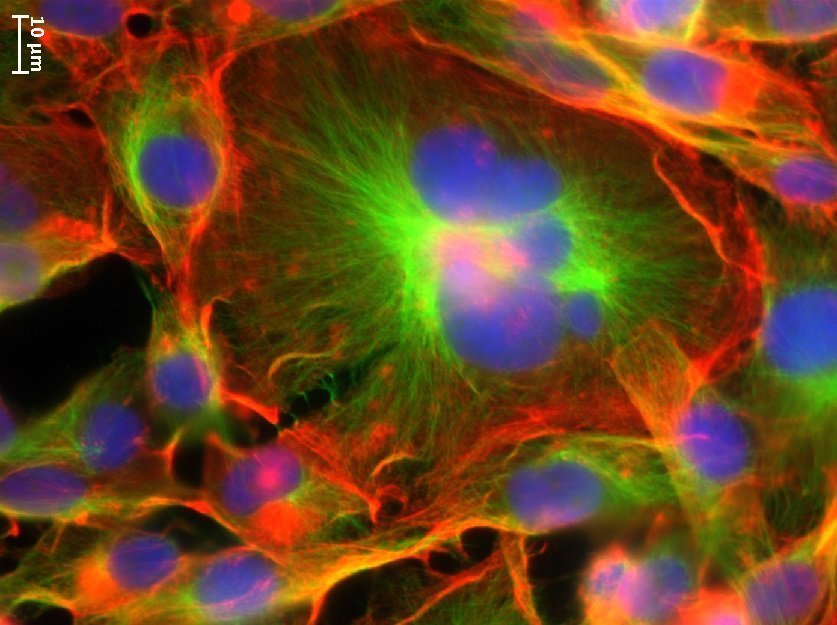 Polyploidal cancer cells—cells that have more than two copies of each chromosome—are much larger than most other cancer cells, are resistant to chemotherapy and radiation treatments and are associated with disease relapse. A new study by Brown University researchers is the first to reveal key physical properties of these “giant” cancer cells.

The research, published Aug. 9 in Scientific Reports, shows that the giant cells are stiffer and have the ability to move further than other cancer cells, which could help explain why they’re associated with more serious disease.

“I think these polyploidal giant cancer cells are the missing link for why tumors become so complex and heterogeneous so quickly,” said Michelle Dawson, an assistant professor of molecular pharmacology, physiology and biotechnology at Brown and the study’s corresponding author. “By understanding the physical properties of this weird population of cells we might identify a new way to eliminate them. Patients will benefit from that.”

Dawson, who is also an assistant professor of engineering with an appointment in Brown’s Center for Biomedical Engineering, worked with graduate student Botai Xuan and two undergraduate students on the study, which focused on a common strain of triple negative breast cancer, an extremely aggressive and hard-to-eradicate kind of breast cancer.

They found that 2-5 percent of cells from this breast cancer strain were polyploidal giant cancer cells with four, eight or sixteen copies of each chromosome, instead of the normal two. The cells with more chromosomes were proportionally larger, which is similar to polyploidal cells in other organisms. Commercially available strawberries, for example, tend to be much larger than wild strawberries because the cells of commercial varieties have eight copies of each chromosome. After treating the breast cancer cells with a common chemotherapy, the team found three to 10 times more giant cancer cells. This both confirmed that the giant cells were more drug resistant and gave the researchers more giant cells to study.

Then Xuan, first author on the paper, injected nano-sized fluorescent beads into the cancer cells ¾ both polyploidal giant cells and normal ¾ using a specialized technique involving high pressure helium gas. He found that the beads moved about twice as slow inside the giant cells, indicating the cells were stiffer. This stiffness allows the giant cells to get so big, Dawson said.

The research also found that giant cells had more actin, a biopolymer that forms wire-cable-like structures inside cells to help give the cells their shape and allow them to move. When cancer cells move, they can spread or metastasize, a word no patient wants to hear. Giant cancer cells move differently than standard cancer cells too. Like the allegorical tortoise, they move slower than other cancer cells, but go further.

The Dawson Lab tested a drug that interferes with actin and found it softened the giant cancer cells, but Dawson cautioned this would not be a possible treatment for triple negative breast cancer, as it would turn a hypothetical patient into mush. However, a next step for her research is to look at the giant cancer cells at the molecular level to try to find specific differences in order to develop a targeted treatment.

They are also going to look for polyploidal giant cancer cells in samples from patients.