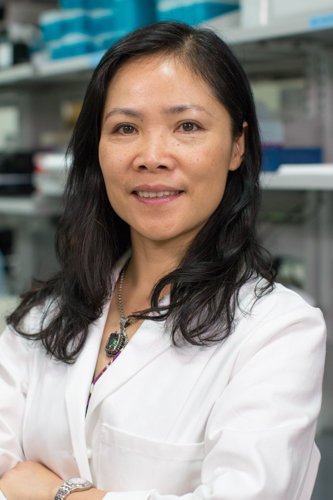 Researchers at the University of Texas at Arlington’s College of Nursing and Health Innovation have developed a new nanoparticle-based platform for simultaneous imaging and treatment of esophageal cancer.

“This is precision medicine,” said Zui Pan, an associate professor of nursing and one of the corresponding authors of a paper on this nanoparticle, which is scheduled to be published in the journal Nature Communications this month. “It is harder to detect the esophageal cancer tumor. One common detection method is the use of an endoscopic probe, which shines a white light through your throat. But the problem is the tumor is embedded in the normal tissue and difficult to see. This will help detect the tumor and guide the surgeon to the area that is lit up and surgically remove it, or consider alternative therapies.”

Esophageal cancer, the sixth leading cause of cancer death worldwide, is responsible for nearly 16,000 deaths in the United States each year, according to the American Cancer Society. It has few symptoms and is often diagnosed at a later stage. The five-year survival rate is less than 20 percent.

Pan, a leading esophageal cancer researcher, heads a lab that is largely devoted to the study and treatment of the disease. Other collaborators on this study include Mingjun Zhang, a professor in the Department of Biomedical Engineering at The Ohio State University, and his postdoctoral fellow Zhen Fan; Yan Chang, a post-doctoral fellow in Pan’s lab and Chaochu Chi, a graduate student who is also in Pan’s lab.

The researchers began developing this nanoparticle in 2015, Pan said. She added that in addition to making it easier to see the tumor, the nanoparticle has the ability to carry the chemotherapy drug to the site.

The nanoparticle is injected into the body, travels through the blood stream and accumulates in the tumor area because of its targeting properties, Pan said.

Pan said that in the past there have been some concerns about attempting to use nanoparticles detecting cancer cells because of the potential to introduce unanticipated side effects. It is important to note that this nanoparticle is both biocompatible and biodegradable.

“This is a significant milestone in cancer research, particularly esophageal cancer research,” said Anne Bavier, dean of the College of Nursing and Health Innovation. “It is potentially transformative and further builds on the college and the university’s efforts to advance health and the human condition.”

This is Pan’s second breakthrough in esophageal cancer research in the last 12 months. Last fall, she published a study in the FASEB Journal that showed that zinc can inhibit the growth of esophageal cancer cells.