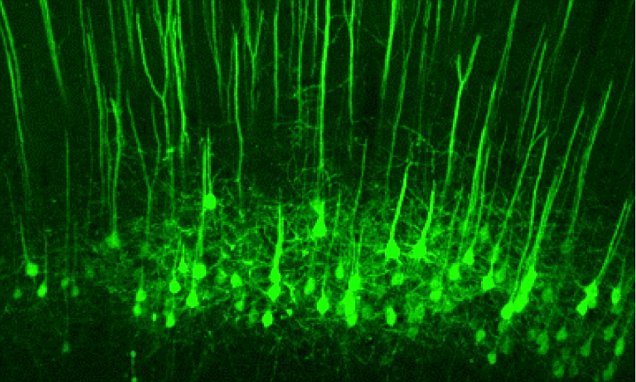 Scientists have discovered a new pain center in the brain that they may be able to ‘turn off’ to relieve agony for chronic nerve sensitivity.

Nerve pain is one of the most difficult types of constant discomfort to treat because most painkillers do not target the correct receptors for it.

After nerve injuries, some people’s brains and bodies stop communicating appropriately, meaning that even the lightest touch may feel painful to them.

Scientists at Boston Children’s Hospital discovered a brain circuit that normally makes a distinction between pain sensation and other touch sensations, but gets disrupted after nerve injuries.

The team hopes to someday use their discovery to ‘turn down’ the volume on chronic nerve pain. 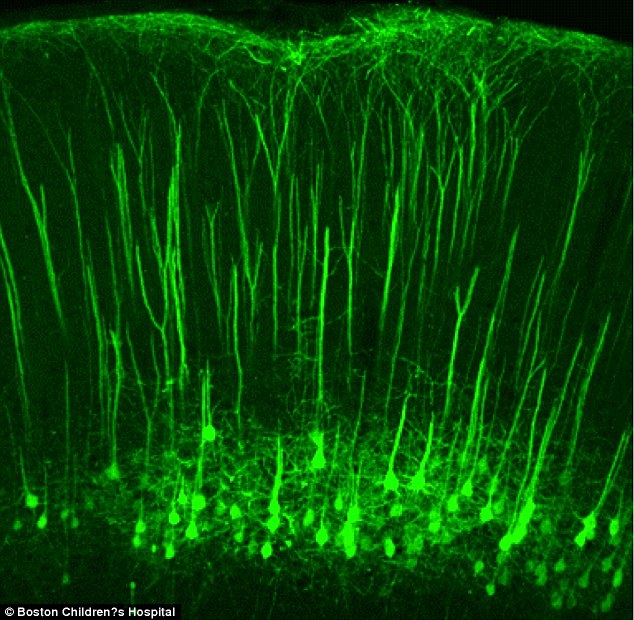 Scientists discovered this group of neurons, which descends from a center for sensory information in the brain to the spinal cord, where ‘touch’ gets mistakenly translated into ‘pain’

As much as 10 percent of the American population lives with neuropathic or nerve pain.

The nervous system is such a complex network of constantly communicating with one another, and damage to any part of this system can make the signals travelling through it go haywire.

This damage, which may be cause by injury or by HIV, shingles or cancer, to name a few, can result in inappropriate sensation messages.

For example, sufferers may feel burning, tingling or numbness with no immediate or obvious cause.

Or sensations that should be innocuous, like the brush of bed sheets against your skin, can become excruciating.

The unpredictability can be not only physically uncomfortable but psychologically torturous.

Anti-inflammatory drugs can bring some relief by removing  some pressure from nerves and antidepressants and anti-seizure drugs may be useful for some people, but, for many, nerve pain is as stubborn as it is serious.

Now, the Boston Children’s scientist have been able to shed some light on why.

They discovered a system of communication that acts like a megaphone for sensory information.

A small group of neurons in the brain can receive sensory information from the rest of the body, crank up the volume on those signals, and send them back to the location of the touch, but with far greater intensity.

These signals travel through the spinal cord, which does some interpreting for our sensory system. The signals may be delivered with one of two messages: simply ‘touch,’ or ‘pain.’

‘After nerve injury, this inhibition is lost, leading to touch information activating pain neurons. When the spinal neurons that are supposed to be pain-only send this information to the brain, we feel pain.’

When he and his team bred the neuron cluster they had discovered out of mice with neuropathic pain – or severed them – they animals no longer had adverse reactions to soft touches, but still responded to actual pain, like pin pricks or heat.

Of course, knocking out genes or severing neurons may not be options in humans with nerve pain, but the findings gave the researchers a target and a mechanism for future treatments.

‘We know that mental activities of the higher brain – cognition, memory, fear, anxiety – can cause you to feel more or less pain,’ says Dr Clifford Woolf, another study co-author.

‘Now we’ve confirmed a physiological pathway that may be responsible for the extent of the pain. We have identified a volume control in the brain for pain – now we need to learn how to switch it off.’