Home » Personal Health » The Large, Painful Sores on This Man's Hands Were Caused By An Extremely Rare Inflammatory Disease 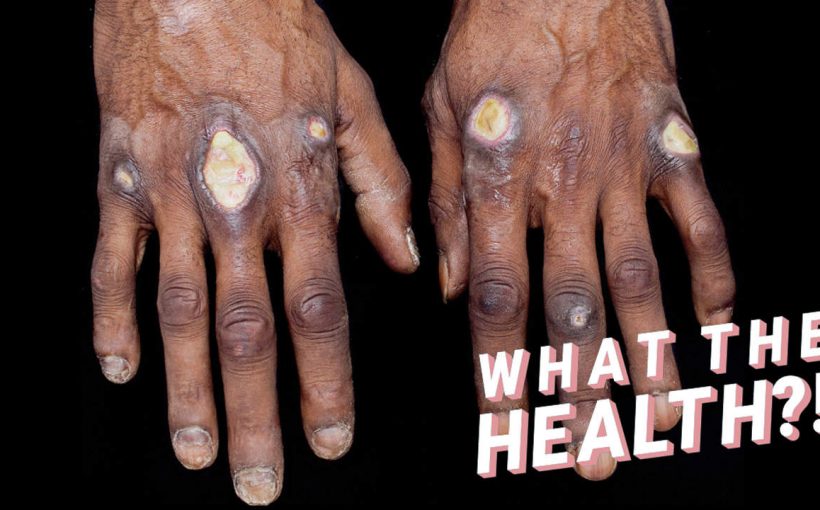 We've all suffered minor cuts and scrapes on our hands, but they're usually caused by household chores or other daily activities. That wasn't the case for one man, whose hand sores led to a case study published in the New England Journal of Medicine Wednesday.

The case study details the story of a 48-year-old patient who sought help from a dermatologist after noticing lesions on his hands. The man had also been experiencing shortness of breath for about six months when he decided to see a doctor. When doctors examined him, they did a chest scan which revealed that he might have pneumonia. He was then diagnosed with a type of dermatomyositis, which affects about 10 out of every million people, according to the National Organization for Rare Disorders (NORD), and is commonly associated with conditions that can affect the lungs.

The specific type of dermatomyositis the man suffered from is called anti–melanoma differentiation–associated protein 5 (anti-MDA5) dermatomyositis. Dermatomyositis in general is a disorder that affects one’s muscles, and belongs to a group of conditions called inflammatory myopathies. (FYI: A myopathy is a disease that causes muscle fibers to function improperly.)

Symptoms of dermatomyositis can appear suddenly or develop over the course of weeks or months, the Genetic and Rare Diseases Information Center (GARD) explains.  Dermatomyositis symptoms include chronic muscle inflammation and muscle weakness, But the most telling symptom is a specific type of skin rash paired with muscle weakness, according to GARD.

The rash caused by dermatomyositis looks “patchy, with bluish-purple or red discolorations” and it develops on patients’ eyelids and on the muscles that are used to straighten joints, like those covering the elbows, knuckles, toes, and heels, according to GARD. Red rashes can pop up on a dermatomyositis patient’s face, neck, upper chest, shoulders, back, as well; and the rashes can be accompanied by swelling in the affected areas.

Adults with this condition might experience a low-grade fever or weight loss, per GARD. Dermatomyositis is commonly associated with interstitial lung disease, which is a group of conditions that can cause scarred lung tissue.

Dermatomyositis can strike at any age, but it most commonly affects people in two age groups: children five to 15 years old and people in their forties to early sixties.

There isn’t a cure for dermatomyositis, but the symptoms can be treated. The patient featured in the new case report was treated with immunosuppressive and immunomodulatory therapies—both of which work to alter the immune system to make sure it can do its job and fight off harmful foreign invaders—as well as therapies targeted at blood flow improvement.

Luckily, the patient healed well. According to the case report: “With this regimen, the patient’s hand ulcers healed within 5 months, and his pulmonary symptoms abated."