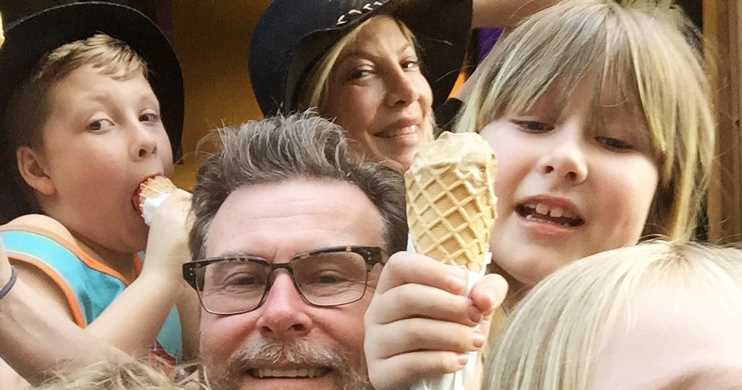 Growing up with famous parents, Tori Spelling has always lived her life in the public eye. The daughter of Aaron and Candy Spelling, who later developed a successful career of her own, has never shied away from putting herself and her family in the spotlight.

Her love life has also played out publicly, most notably her marriage to husband Dean McDermott. The couple, who tied the knot in 2006, have since welcomed five children together: son Liam in March 2007, daughter Stella in June 2008, daughter Hattie in October 2011, son Finn in August 2012, and son Beau Dean in March 2017. The Scary Movie 2 actress is also stepmom to McDermott’s son Jack, whom he shares with ex Mary Jo Eustace.

The tight-knit family isn’t afraid of giving their fans a close look at their lives at home — even the more challenging moments. Tori and her husband have been honest and open about the difficulties they’ve faced in their marriage, including infidelity, health scares and financial troubles. Despite their ups and downs, the BH90210 alum told Us Weekly in February 2019 that she and the former Chopped Canada host “don’t have relationship problems.”

“We communicate now, I have a voice,” she explained at the time. “He probably hears too much of it but he [is so] good at listening. Women like to talk and over-explain.”

The longtime couple has been dedicated to working through their past troubles for the sake of their children, but McDermott admitted to having a hard time reconciling with the concept of monogamy — especially when his relationship has been put “under a microscope.”

“Men, we’re like, we need to spread our seed everywhere. It’s [been] in our DNA for millions and millions of years,” he told Us in October 2019. “There’s that, but then there’s also, ‘Oh, God. This relationship is work.’ And it is. Every relationship is work and when you get to that point, you can’t bail. You’ve gotta knuckle under and work it out.”

Scroll down to see the most adorable photos of the actress — and her brood!