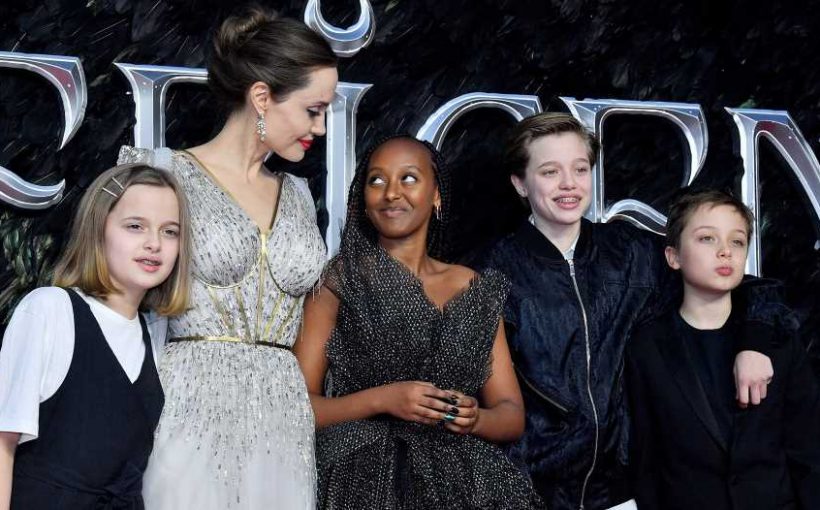 Working mom! Angelina Jolie celebrated the impending release of Maleficent: Mistress of Evil by having her kids tag along to the London premiere.

Zahara, 14, Shiloh, 13, and twins Knox and Vivienne, 11, joined the actress, 44, on the red carpet on Wednesday, October 9. Jolie’s older sons, Maddox, 18, and Pax, 15, were not present. The eldest is away at college in South Korea and reunited with his mother at the Japan premiere earlier this month.

The Oscar winner stunned in a gown that featured a cape, structured bodice and metallic details on Wednesday. Zahara wore a black dress, Shiloh sported a bomber jacket and pants, Knox rocked a black suit and Vivienne looked too cute in a black jumpsuit and white T-shirt.

The kids wrapped their arms around each other and Jolie as they posed for photos.

The Salt star’s father, Jon Voight, attended the Los Angeles premiere with her, Pax, Zahara, Shiloh, Knox and Vivienne last month. He gushed about his daughter at the time.

“It’s wonderful for me to spend time with Angie,” the actor, 80, told The Hollywood Reporter on September 30. “Any five minutes I get, I’m always appreciative, so this is great that I could come and hang out with her a little bit — and the kids, too.”

The Ray Donovan star went on to rave about Jolie’s acting chops. “I’m a father and a fan,” he said. “Like all really fine actors, Angie has got her own unique approach and, you know, set of understandings. She’s very strong about that. When she comes to a set, she’s so totally comfortable. She knows what she wants.”

The slew of red carpet appearances with the kids comes amid tension with their father, Brad Pitt. A source revealed in the new issue of Us Weekly that the Ad Astra star, 55, hopes to reconnect with estranged son Maddox with his ex’s help. “Brad has talked to Angelina about visiting Maddox in Seoul. Angelina has been trying to heal the rift between father and son,” the insider noted. “Maddox hasn’t been receptive.”

Pitt once doubted that Jolie was “making a concerted effort” on her end, but he now knows she is sincere, according to the source. “Brad remains upbeat that Maddox will reach out,” the insider added.

Scroll to see photos of Jolie and her brood at the London premiere!