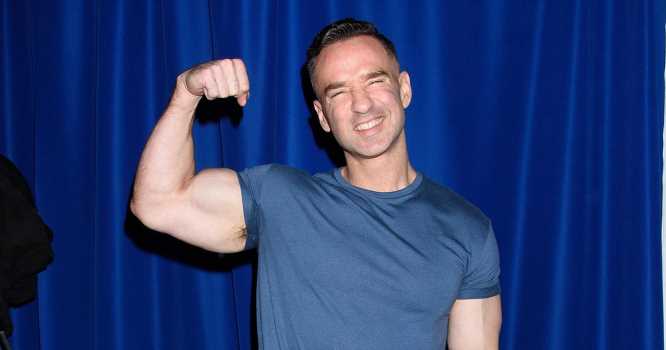 Abs are here! Mike “The Situation” Sorrentino has remained committed to his prison workout routine after getting released in September, but he’s made a few changes now that he’s home.

“In prison, [I’d work out] between two to three hours a day,” Sorrentino, 37, told Us Weekly exclusively at the La La Anthony Presents: Winter Wonderland event benefiting Girls Inc. of New York City and the Police Athletic League on Thursday, December 19. “Sometimes two to three times a day. Morning, noon and night, but eventually I reevaluated it and did it twice a day.”

After serving eight months for tax fraud at the Federal Correctional Institution in Otisville, New York, in 2019, the Jersey Shore: Family Vacation star returned home. His fitness is still a main priority.

“Now that I’m home, it’s six days a week with one cheat day that I put on YouTube,” he told Us. “Now it’s about an hour and a half [per workout].”

The reality star revealed that he got into the best shape of his life while in prison because “I got an awesome base.” He explained that he lost 40 pounds while there. “I’m so proud of myself that I took a negative situation and turned it into a positive,” the New York native said.

While in prison, the Jersey Shore star was also able to maintain his sobriety. On December 5, Sorrentino celebrated four years of being sober, although his official sober anniversary isn’t until December 24.

“I am grateful to be four years clean and sober, being my best self and living my best life,” Sorrentino told Us in December. “The comeback is truly greater than the setback.”

He revealed that his sober journey is something he hopes inspires those around him. “I am showing my friends, family and dans by example that your current Situation is not your final destination and to never give up on yourself,” he added.

Throughout all the ups and downs, Sorrentino has had the support of his wife, Lauren Sorrentino (née Pesce). “You are an inspiration honey, so proud to call you my husband,” Lauren commented her husband’s celebratory sober photo on social media.

The couple, who wed in November 2018, are currently trying to “expand our family,” Mike told Us in December. In November, the pair revealed that Lauren, 34, had suffered a miscarriage. “At about six and half, seven weeks, I miscarried. It was heart-wrenching,” the New Jersey native said during a November Strahan, Sara & Keke appearance. “When I found out we were pregnant, I felt like this is why we went through all these challenges for years and that this was our time and it was our blessing. … It was hard. It was really difficult.”

Following their pair’s nuptials, Mike told Us exclusively that they had been “working on” conceiving their first child. “We’ll see,” he told Us in November 2018. “We would love a boy first. We’re excited for little Situations!”