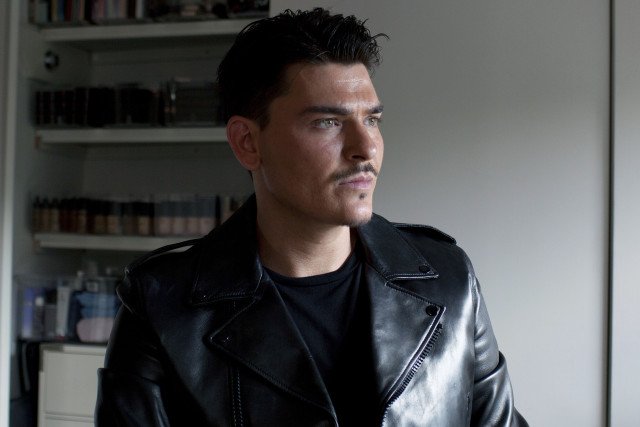 "This is the famous Mario face, the one I've been waiting for for so long."
That's Kim Kardashian, then in her late 20s, speaking in a grainy, three-part video series uploaded to YouTube nine years ago. The Mario she's referring to is celebrity makeup artist Mario Dedivanovic, with whom Kardashian had just started working at the time.
In the series, Dedivanovic re-creates Kardashian's makeup look for her 2008 Vegas Magazine cover shoot. The video is essentially the same as one from March of this year, in which Dedivanovic does Kardashian's makeup using the KKW x Mario palette, and the structure has been repeated countless times in the beauty vlogs saturating YouTube today. The only visible differences between the Vegas and KKW videos are the lighting, Dedivanovic's facial hair and Kardashian's pink top knot — but much more than just that has changed in the near decade since.
Born and raised in the Bronx, N.Y., Dedivanovic is the son of Albanian immigrants. His father was a superintendent and his mother was a cleaning woman for L'Oréal.
"We were pretty poor," he said on a recent afternoon from his sprawling Upper East Side penthouse. He "always wanted nice things," he added, which is why he got his first job bagging groceries at a local supermarket at the age of 12.
From then on Dedivanovic worked, supporting himself and his family as a pretzel boy at the Bronx Zoo, the manager of a hot dog stand and a busboy at a restaurant in Little Italy. When he was 17, he ventured to Manhattan with his mother to find work and set his sights on Sephora. He looked up a woman from the corporate office at the library, called to make an appointment with her and got hired to work at the newly opened location in the Flatiron District.
"It was the first day of work at Sephora that I had this epiphany and said to myself, 'This is what I’m gonna do for the rest of my life,'" he recalled.
Dedivanovic started as a greeter and fragrance consultant and worked his way up to makeup artist, booking clients outside of the store. His first non-Sephora gig was for two cabaret singers he met at the Urban Decay counter. They paid him $25.
Kardashian came into the picture during the prime of Myspace and Facebook, where Dedivanovic had built a following sharing editorials and test shoots he did with various celebrities — Veronica Webb, Natasha Bedingfield and Gina Gershon — as well as assisting photographers such as Fadil Berisha and makeup artists like Kabuki Starshine and Billy B. Kardashian asked him to do a makeup Q&A on her blog and Dedivanovic sat for hours answering strangers' questions. She then suggested they film a makeup tutorial, and the Vegas Mag video series ensued.

"We did that video and all of a sudden I became this father figure to makeup artists around the world," Dedivanovic said. "Being a makeup artist wasn’t a popular thing back then. It was around 10 years ago that it started picking up and the career of a makeup artist became interesting to people. They would all come to me for advice and ask me questions on how I got started. Huda Kattan said, ‘You were one of the first ones that I ever wrote to for advice, the only one that responded to me on Facebook.’ I don't even remember."
The interest in him as a makeup artist — especially to Kardashian, who was then swiftly on the rise to being one of the most famous people in the world — gave Dedivanovic the idea to start a workshop in 2009. He was living in Los Angeles and decided to host a two-day makeup tutorial class. About 16 to 20 students showed up and he lost money on it.
After a second L.A. class, he planned one in New York, posted about it on Twitter and sold 100 tickets "quickly." With Adrienne Bailon as his model, he taught the New York class and had a videographer film so he could share it to YouTube. The response, he said, was incredible.
The Master Class, as it's known today, is like a concert for makeup lovers. Some of the biggest beauty bloggers — Huda Kattan, Makeup by Ariel, Makeup by Samuel and Makeup by Ari — have attended, some more than once, and Dedivanovic has hosted the class globally, including one installment in Albania that drew 1,200 people.
On Nov. 3, he'll bring the class to Sydney, where he's anticipating 800 to 900 people. And yes, he's going to try to take a selfie with most of them.
"Ever since my first Master Class, people from Australia have been flying to my classes no matter where I do them," he said. "It’s really hard when you’re in a different time zone to organize an event, so I put it off for a while. I want to do it this year in 2018 cause they’ve been so supportive. All these people fly and incur the expenses and hotels and flights to come to the Master Class, so I want to go there and do it for them. It’s been one of the most highly requested locations for me."
The Sydney class will be held at the Roslyn Packer Theatre. Tickets, sold via Dedivanovic's web site, range in price from 475 Australian dollars, or $349, for a standard ticket, which gets you a view of the demonstration and a certificate of completion, to $775 for VIP, which gets you a Master Class gift bag and a meet and greet, to $1,200, which guarantees the best seats in the house and zero wait in line.
Dedivanovic considers the class integral to his credibility as a makeup artist. He turns down brand deals on a daily basis that would require him to be exclusive to any one in particular.
"I cannot teach a Master Class and be 100 percent authentic if anyone tells me what to use," he explained. "I have to be able to use anything that I want and that’s truly the only way that you could be authentic." He is currently a brand ambassador for Laura Mercier.
It seems like a natural next step for Dedivanovic, who now has about 19 years of experience under his belt, to release his own line of makeup. He collaborated with KKW Beauty in April on a four-piece collection, but has yet to release anything of his own — he's barely even talked about doing so.
When asked if he would release his own line, Dedivanovic said, "Yes…that’s been my goal since I was a teenager. I’ve been getting approached and asked by companies and investors for many years. Up until the past two or three years, I never felt worthy enough because I felt like I needed to have at least 20 years of experience as an artist to do that. It’s a big deal for me. That would be a next chapter of my life, my career."
RELATED STORY: Dedivanovic Dives Deeper Into Creating a Makeup Brand
He said he's been working with labs "around the world" for the past three years developing product and has walked away from "gazillions" of dollars because the opportunities ultimately wouldn't allow him the final say.
"The thing with the makeup line is there definitely will be one in the future," he said. "I’m a perfectionist. I think people expect something great from me and I expect something great from myself as well.…I honestly don’t feel rushed to do it because I’ve never rushed anything in my life. I like the old-fashioned way of struggling, paying your dues and slowly reaching a little bit of success. There’s so much unnecessary stuff that’s coming out every day that it’s overwhelming, even for me as a professional. I’m totally okay waiting a little bit. Maybe this bubble’s gonna burst, which I think people are afraid of, whereas me, I’m not afraid of that. If it bursts, it bursts. Maybe then it will be about quality and not quantity."
More from WWD.com:
Mei Kawajiri: Instagram's Most Viral Nail Artist
Source: Read Full Article