Home » Personal Health » Why Would Someone Poop in a Public Bathroom and NOT Flush? We've Got Answers 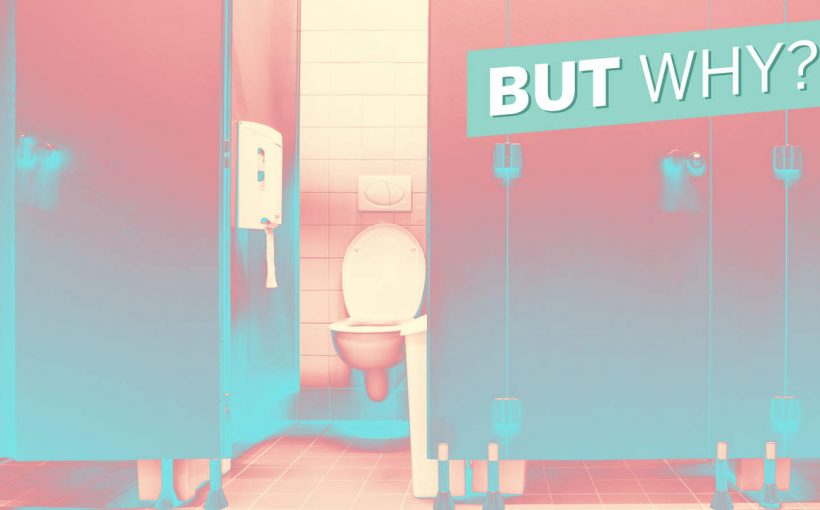 Introducing Health's new column, Why Would Someone Do That? Here, psych experts decipher the reasons behind the most puzzling human behavior mysteries.

It’s your worst office nightmare: You’ve stumbled through the first few hours of work thanks to three cups from the Keurig, checked to make sure that no one’s stolen your lunch, and finally wandered into the restroom to relieve yourself and take a tiny, unsanctioned break from your coworkers.

But what you’ve walked into isn’t a bathroom; it’s an active crime scene. And when you open a stall, you know that no jury would convict you if you found the person who’s defecated all over the place and disposed of them, Liam Neeson–style.

Right now, you’re probably thinking about the last time you walked in on such a bananarama of human indecency in your workplace. And you’ve got feelings. Everyone does.

Every office has this poop problem, apparently

One person I spoke to—on condition of anonymity—told me that the women in their office wanted to launch a full-on hunt for the person who’d gone number two in a plastic bag and then dumped it in the bathroom trash can. They’d size up one another at the water cooler, asking leading questions about gut health and what everyone had for lunch. In that time span, the poop bandit got away with the same thing two more times.

In another office, a man fed up with unflushed anonymous poo took it upon himself to snap pictures of his workmates’ feet as they used the stalls. (Illegal!) If a mess were to be made, he reasoned, he’d just match the stall to the culprit’s footwear and inform the authorities—though it wasn’t clear whether that would be the police, HR, or a vigilante group he’d found on the internet.

Other people I asked said they preferred to block out whatever mess they came across. One friend, a person who would otherwise agree we are close, balked at my question about the bathroom habits of officemates. “Why,” he said, ‘what have you heard?” and then: “Yeah, we’ve had a few problems, but now most of us just use bathrooms on other floors.”

Why other floors didn’t have the same issues, he couldn’t tell me. But he did say that the notes that HR put up didn’t seem to help. If anything, conditions may have gotten worse, though he couldn’t be quite sure why.

Searching for the psychology behind a poo and run

What goes through the mind of someone who walks into a serviceably clean bathroom at their workplace and proceeds to go on a rampage with no regard for the people they see five days a week?

Here’s one interpretation: People just aren’t aware of what they’re doing. They’re so worried about not catching anything from the seats, they can’t imagine they might be contributing to the bathroom problem the entire staff complains about.

One person told me that her last office had a chronic hoverer who let her commitment to personal hygiene be known by the dew drops or urine she left behind. “I sometimes wondered aloud at the logic,” the innocent bystander told me, “because toilet seats aren’t all that germy—unless you piss all over them because you refuse to plant your cheeks.”

A man who works in an office in San Francisco told me that I might be chasing a culprit that doesn’t exist. In a twist as shocking as any of the (first three) Saw movies, he suggested that the messes in the bathroom weren’t the work of one angry person but a group effort from anxious office workers who had to do their business and couldn’t help but ignore or add to the horror.

“You walk into the bathroom,” he said, “and you see a mess. But it isn’t your job to clean it up and you don’t want to tell someone because they think it might be you. So you just slowly back out and hope that no one blames you. What am I supposed to do? I don’t know how to fix a toilet.”

Of course, it’s a little bit different if there’s an emergency element, and you don't have a second to spare to back away and use another stall. “If it’s a photo finish situation, then, yeah, I might have to do something I wouldn’t necessarily tell other people about,” the man added.

So that’s another twist: Even people who’ve never considered themselves bathroom vandals may contribute to the eldritch terrors that greet you when you’ve entered the restroom during your afternoon slump. None of us are innocent.

But these theories may be a touch too kind. A janitor I spoke to said he’s definitely seen people engage in deliberate bad behavior in the office bathrooms he takes care of.

“When my job is done right, people don’t know I’m around. They only remember when I screw up and some people are sort of mean. It’s like, you forgot to take out my trash, so here’s a little surprise,” he says. “When I make people mad at work, they know that if they make a little mess in the bathroom, I have to deal with it.”

Office workers have left feces, he says, in places where it would have been very hard for it to find itself otherwise. But these heavy hitters are few and far between. Most people, I’m told, just splash water everywhere or miss the garbage can “on accident.” Sometimes it feels like they’re doing it to remind him that they’re better than him—or to remind themselves that even when their bosses come after them, there’s always someone safe to take their aggression out on…someone who will always have to clean up their mess.

A professional sheds some light

In the course of writing this story, I launched a desperate campaign to speak to someone who’s deliberately trashed their office toilet or, at the very least, just made some yellow and let it mellow.

I asked friends, acquaintances, people I’d just met. I posted my question on Twitter—giving my email address so any interested parties could contact me anonymously—and I enlisted the aid of “Help a Reporter Out,” a site whose thousands of users rush to answer questions posed by bloggers and journalists.

But my pleas to speak to a bathroom annihilator went loudly unanswered. Even though, once again, I’d promised to take their secrets to the grave. And even beyond.

Shuli Sandler, PsyD, a New Jersey–based clinical psychologist with more than a decade of experience, wasn’t surprised. “Even when you say something’s anonymous, I don’t think that’s true,” Sandler, the only person to allow the use of her name in this story, told me.

“Anonymity is protection over our true impulses. So if someone owns up to it, they either don't believe they're truly anonymous or they're no longer anonymous to themselves. They have to acknowledge their own actions in a meaningful way,” she says.

By asking people to unmask themselves (even to themselves), Sandler believes I’d be forcing them to attach feelings to their actions. Shame, guilt, and self-criticism, where before there was just excitement and aggression and impulsivity.

Some people just want to crap on their boss, literally

The problem is that some of us have a lot of pent-up aggression. And if we don’t have an outlet for all that bottled up rage (therapy, for instance), it’ll come out in unexpected ways. When a bathroom defiler’s had a hard day at work, Sandler theorizes, there’s a push-and-pull between the part of them that says “you can’t make messes,” and the part that says “No, I’m an adult, I do whatever I want.”

The well-meaning signs that remind us to be kind to others when tinkling and sprinkling become invitations for a regressive rebellion. There are no cameras in bathrooms, so what’s the cost of engaging? By the time the mess is discovered, the perpetrator is long gone, back at their desk or buying a Coke from the vending machine in the break room.

The messes that these people leave behind, Sandler suggests, are indicative of the internal messes that they’re struggling with. “People have a tendency to act out their feelings in a way that can often be destructive as a way to sort of push away the need to personally reflect, to be thoughtful, to open up their minds.” she says.

So the prescription for the poop bandits in your office? Maybe it’s just therapy for the guilt and insecurity they feel in their lives. But don’t post a sign about it in the bathroom.