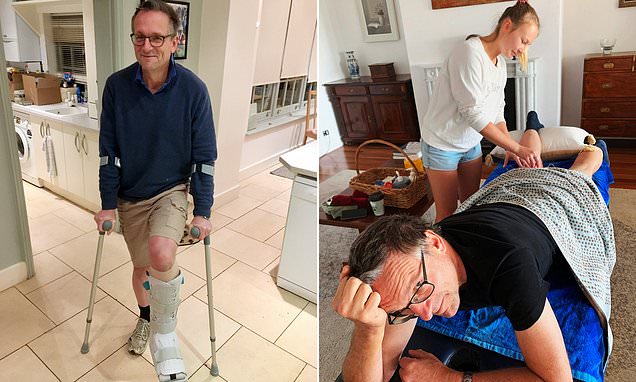 Now I’ve really torn it! Nine months after rupturing his Achilles, DR MICHAEL MOSLEY has wrecked his hamstring and has decided to treat it by sticking needles in his thigh

This week, I write my column sitting down, rather than at my usual standing desk.

For the second time in a year, I have injured myself.

Nine months ago it was my Achilles tendon – the fibrous cord that connects the muscles in the back of your calf to your heel bone – which I ruptured while out on a run.

Under the guidance of my sport and exercise consultant, Dr Phil Batty, I nursed it back to health by wearing a special supportive boot and doing regular physiotherapy.

Apparently, a ruptured Achilles is a classic middle-aged male injury. Men are five times more likely than women to suffer the ailment after exercising.

And my latest malady is, I’ve learned, similarly common in men of my age. 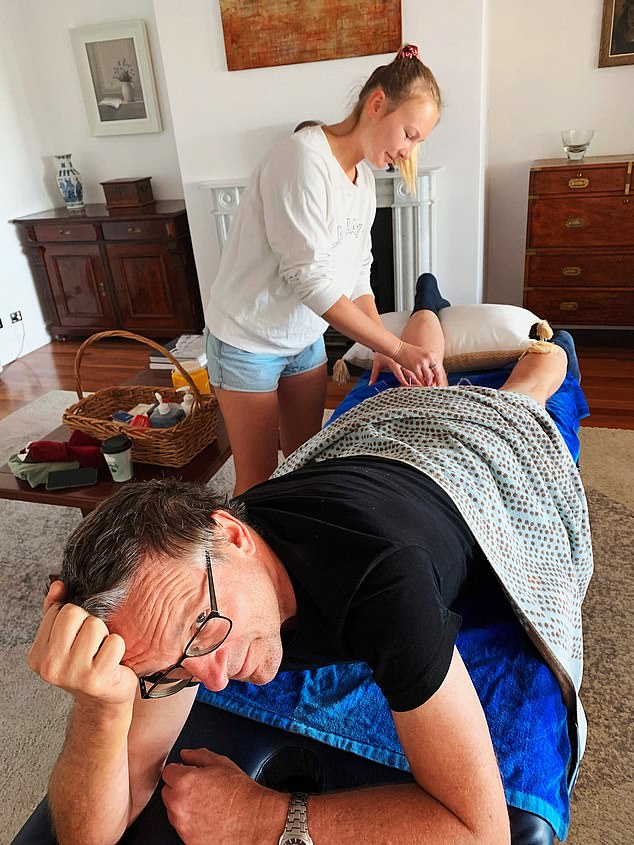 FLAT OUT: Michael having treatment after an ill-advised sprint ended in a torn hamstring

Two weeks ago, I tore a hamstring in my right leg. The hamstring muscles run up the back of the thigh, and are pretty important for walking, running, and doing anything that involves bending at the knee.

I’d been so pleased with the speedy recovery of my Achilles that I decided to take up running again, and went out exercising with a group of friends in Perth, Australia.

But I got carried away.

After about 45 minutes of jogging and stretches, someone suggested we finish off with a few sprints.

I should have bowed out gracefully, but being competitive, I decided to go for it.

Halfway to the finishing line, I felt one of my hamstring muscles go ‘pop’. And then there was a surge of pain through my upper leg.

I was driven back to a friend’s house and followed a protocol recommended by exercise experts – see the panel, right for more details on this.

Then, an Australian physiotherapist called Cassie, a friend of a friend, visited and offered some rather surprising advice.

She suggested that anti-inflammatory pain medication such as ibuprofen, which most of us turn to in these situations, was pretty useless. 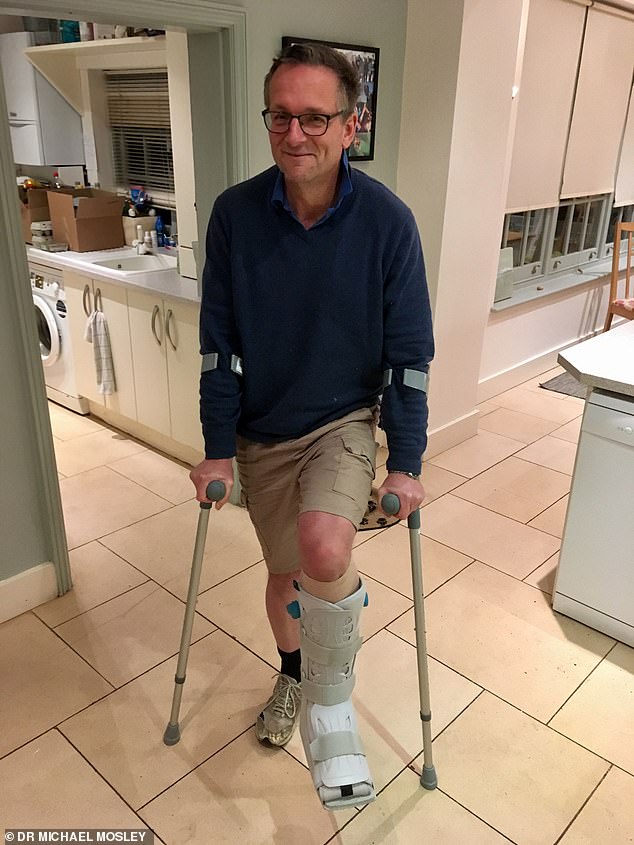 A few days ago, while I was out running through the woods, I tripped, tried to correct myself and ‘bang’ – I felt an intense, crippling pain in the back of my leg. I did wonder for a moment if I had been shot, or if someone had snuck up behind me with a hammer and given my calf a sharp whack

Inflammation, she said, is part of the healing process, particularly during the first 24 hours. Instead, she suggested I try something wildly different.

Cassie’s recommendation was an type of therapy known as dry needling.

It involves inserting very thin needles into the area that you want to treat.

Although it looks a bit like acupuncture, it isn’t based on traditional Chinese medicine. Rather, it’s based on the theory that after an injury, the muscles go into spasm in an attempt to protect the injured area.

Inserting a needle into a small knot of painful muscle supposedly relaxes it, and reduces pain.

Australian physiotherapists use it a lot to treat injuries to the hamstrings, back, neck, shoulders, hips and ankles.

I was sceptical, but decided to give it a go.

Strangely enough, the needles didn’t hurt when they went in. I did feel a strange tingling travelling all the way down my leg, followed by significant pain relief.

To my surprise, the following day I was walking around quite comfortably.

WHAT TO DO IF SOMETHING GOES ‘POP’

If you need a way to remember what to do immediately after an injury, think of the word ‘RICE’.

The acronym relates to the four steps of treating an exercise-induced problem in the legs and feet.

My experience of dry needling was certainly positive, but I am just one person.

So what does science say?

I discovered there’s not a huge amount of research out there. But so far, the findings seem to be positive.

A recent Iranian study involving 40 female athletes suffering from knee pain found that, although physiotherapy helped to reduce pain intensity, combining it with dry needling had a much more significant affect. Some may argue that this is merely an example of the placebo effect – where a treatment works because you believe it will.

Chinese researchers carried out a more reliable kind of study to test if this was true.

They recruited people with lower back pain and assigned some of them to a dry needling treatment, and others to ‘sham’ needling – when the needles prick the surface of the skin, but don’t penetrate the muscle.

Dry needling was indeed found to be more effective.

Don’t ask me how it works. All I know is that it’s been two weeks since my treatment and I am already back on my bike cycling. Astonishingly, I can even manage a gentle jog.

Sprinting, however, is still not on my exercise menu.

I began to wonder if I could have avoided injury by stretching more. I often cycle past my local park on weekends and see swarms of middle-aged men preparing for a run using extravagant stretches.

It’s a wonder how they manage to get their bodies into such a position. But does it help them avoid injury?

In fact research suggests that stretching is largely a waste of time.

One such study involved thousands of Army recruits. Participants were randomly allocated to stretching their leg muscles for several minutes before exercise, or just doing a gentle warm-up instead.

They were then followed for several months during their exercise sessions.

When their rates of injuries were compared, there was no difference between the two groups.

If you do want to warm up, make it a dynamic routine, using movements such as arm-circling and side-stepping.

These movements send messages from the brain to the muscles, preparing them for working out.

As for me, I’m hoping to be back running in a few weeks’ time.

And if anyone suggests a sprinting race, I think I’ll be letting them win…