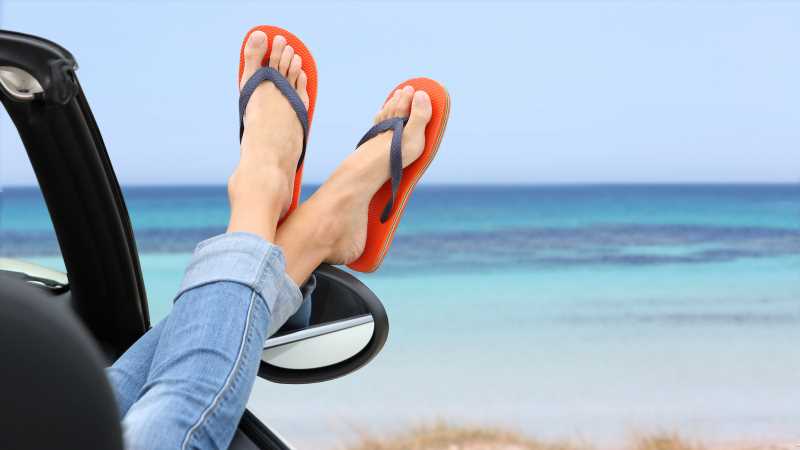 Are you the kind of person who spends all summer, every summer, in flip-flops, at least at any time when you’re not actually barefoot? If you’ve even got a closet full of gold lame and glitter flip-flops in the event you’re invited to some type of summertime dress-up event (as well as black flip-flops for more formal occasions), you’re probably already aware of some of the pitfalls inherent in your favorite footwear. They don’t offer much protection against cacti or broken glass, they’re no help whatsoever when your dog steps on your foot, and, yes, it’s quite possible to get a sunburn on the tops of your feet. (Ouch!) Oh, and let’s not even get into the truly painful subject of fire ants … some things just hurt too much to talk about.

Even if you’re willing to put up with all of the aforementioned perils, however, there is one occasion on which you should never, ever wear flip-flops. Wear them while ascending Mount Everest if you must, but do NOT wear them when you’re behind the wheel.

Why flip-flops are a danger to drivers

The Daily Mail reports that a poll of over 1,000 British motorists by insurance company Shelia’s Wheels (a much cooler name than Progressive) found that fully one-third of all motorists admit to driving while flip-flopped. Of this number, 27 percent said their footwear had caused them to have an accident, while an additional seven percent felt that their flip-flops may have contributed to a close call. Among the problems faced by flip-flop-wearers include getting a shoe stuck beneath a gas or brake pedal and slower braking time — research has shown that flip-flops can delay braking by .13 seconds. While this may not sound like much, it’s the amount of time it takes to travel about 11.5 feet at 60 miles per hour.

Here’s a horrifying statistic that few people are aware of: Flip-flops may contribute to up to 1.4 million accidents or near-accidents per year! The Virginia Department of Motor Vehicles, speaking with NBC4 Washington, adds that the danger of flip-flopped driving only increases when the weather is wet, since this makes flip-flops extra slippery. They urge that you leave a pair of sneakers in your car and change into them every time you get into the driver’s seat. This simple act will only take a minute, but it really could prevent a tragedy you’ll regret for the rest of your life (which could be a lot shorter than it would have been had you but worn the right shoes).