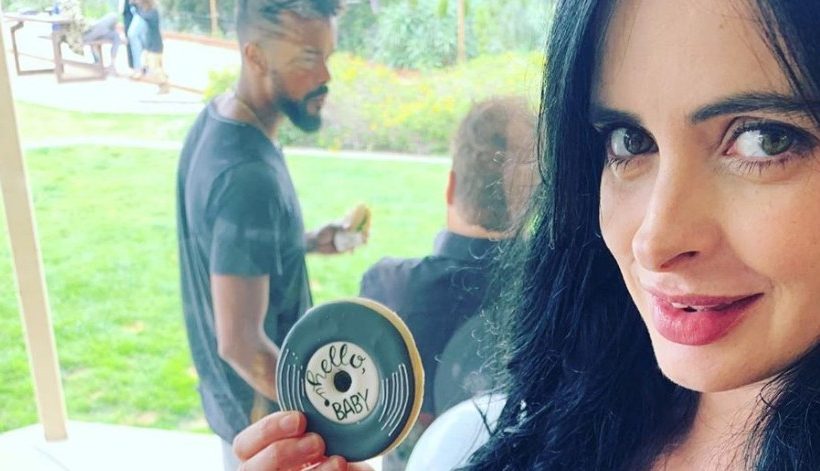 “My best friends threw me a baby shower and my heart is exploding,” the Jessica Jones alum, 37, captioned a spread of party pics on Instagram.

The actress revealed that she and her boyfriend, Adam Granduciel, have a little one on the way when she debuted her baby bump at the Academy Awards in February. “Surprise!” she captioned shots from the red carpet on Instagram, cradling her stomach in a red lace gown.

The Defenders alum went on to show off her budding belly on her March babymoon, sitting poolside with the War on Drugs singer, 40, in a black-and-white one-piece suit.

Us Weekly confirmed that Ritter was dating Granduciel in August 2014. “It started with her being a fan of the band,” an insider told Us at the time. “Then somehow she got in touch with him and went to some shows.”

The Pennsylvania native shouted out her boyfriend on his birthday in February, writing, “Happy bday to the coolest dude I know. Love you man.”

She raved about her three-season Netflix show that same month after Jessica Jones‘ cancellation. “Taken a few weeks back at the table read for our SERIES FINALE,” Ritter wrote at the time. “I love these people to the moon and back. It has been a dream to play Jessica alongside my amazing cast and the best crew in the business for these past 5 years. I am so grateful for every second of it. We have THE BEST fans. You guys mean the world to me and I appreciate you beyond words.”

She added: “The final season of #JessicaJones is coming later this year and I am proud of how we complete JJ’s journey. I can’t wait for you all to see it. Stay tuned and more to come.”

Keep scrolling for an inside look at Ritter’s baby shower from a record-inspired dessert spread to a gorgeous maternity dress.