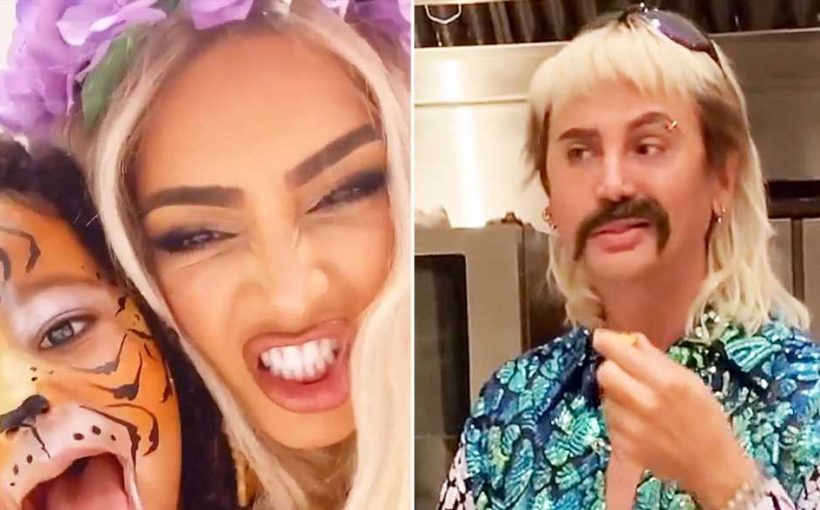 The KKW Beauty creator, 40, dressed up as Carole Baskin, complete with a purple flower crown and an animal-print outfit. She gave glimpses of her attire while playing with her and Kanye West’s four kids — North, 7, Saint, 4, Chicago, 2, and Psalm, 17 months.

“I just want to kiss you,” the makeup mogul said to her youngest. “Can Mommy have a kiss? You smell so good!”

The reality star went on to film her eldest daughter singing a viral TikTok song about Baskin, 59. When Kardashian didn’t know the words, North finished for her while dancing around in a tiger jumpsuit and face paint.

As for Saint and Chicago, the little ones rocked the exact same outfits as their older sister. Cheban, 46, dressed as Joe Exotic with facial hair and a mullet.

Kardashian recently returned from a private island birthday getaway celebrating her 40th. “We didn’t find out until on the plane. And it was so special,” Khloé Kardashian told Ellen DeGeneres of the trip on Thursday. “We were told three nice outfits for dinners or something like that but other than that we had no idea. It was the coolest experience to be that surprised.”

While Kim found herself under fire for traveling amid the coronavirus pandemic, the Strong Looks Better Naked author, 36, defended the vacation.

“I think there’s so many frustrations going on for everybody, but also, it’s her 40th,” the Revenge Body host said on the Ellen DeGeneres Show. “This is something she really wanted to do for us … it was such a nice thing.”

Kourtney Kardashian, Scott Disick and Kendall Jenner were invited to Kim’s birthday bash among others. While Kylie Jenner was noticeably absent, there is “no drama” between the sisters, a source exclusively told Us Weekly, explaining, “Kylie was just tied up with other commitments, and that’s why she wasn’t at Kim’s birthday trip. They are obviously still incredibly close.”

As for West, 43, the rapper “arrived late because of work commitments but was there the last few days of the trip,” another insider told Us. “Kanye also sent Kim something very special on her birthday since he wasn’t there the entire time.”