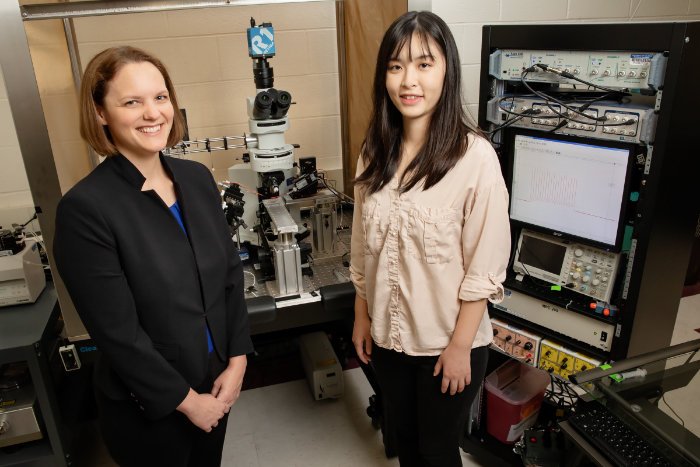 The study, which tracked hormone levels and activity in specific neurons that trigger the release of reproductive hormones in mice with epilepsy, demonstrates that the effects of epilepsy on other areas of the brain may not be as static as researchers have thought, said study leader Catherine Christian, a professor of molecular and integrative physiology at Illinois. The study was published in the journal eNeuro. Jiang Li, a graduate student at the U. of I., was the lead author of the study.

People with temporal lobe epilepsy—the most common type affecting adults—also have high rates of problems with their reproductive endocrine systems, though the connection is poorly understood.

“Endocrine disruptions are a prominent comorbidity with epilepsy, yet there haven’t been good basic research studies done to start to tease apart what’s happening in the brain to drive this connection,” Christian said. “If we can identify the neural mechanisms that are happening in the brain to link epilepsy and reproductive endocrine disruptions, can that give us a new target and, perhaps, a chance of better treating the epilepsy as well?”

Christian’s research group studied a mouse model of epilepsy commonly used in research. Though not a perfect analog of human epilepsy, it has many similarities, including spontaneous, localized seizures and—as Christian’s group demonstrated in another recent study—a high probability of endocrine disruption.

“The advantage of working in a mouse model is that we can directly record from specific neurons and look at the changes in their activity, comparing epileptic mice with those that don’t have epilepsy,” Christian said. The researchers also compared males with females, as well as comparing female mice with epilepsy that developed estrous cycle disruptions with those that maintained normal cycles—groups never before compared in a study of epilepsy, Christian said. The mouse estrous cycle is similar to the human menstrual cycle, although only a few days in length.

The researchers tracked hormones in the animals’ blood and saw that while testosterone levels remained unaltered in male mice, female mice with epilepsy showed significant changes in levels of the hormones estradiol and progesterone.

“There are many fluctuations and dynamic changes going on during the female cycle, and signals in the mice with epilepsy are going in the wrong direction at the wrong time,” Christian said. “We usually think of neurological changes correlated with epilepsy going in one direction—too much or too little—at a static rate, and tailor treatments to correct that. But here, we show that one neuron population has big fluctuations in activity. At one stage of the cycle, they’re showing higher rates than what would be expected, but at another point in the cycle their activity is strongly suppressed.”

Next, the researchers plan to investigate activity both downstream from the neurons—the pituitary gland and reproductive organs—and upstream, attempting to trace the cause of the changes in neuron firing back to seizure activity.