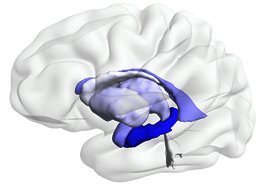 Alzheimer’s disease leads to the loss of brain tissue, primarily in the hippocampus, which plays a crucial role in the formation of long-term memories. In previous studies, Christian Wachinger, a neuroinformatics specialist at LMU, was able to show that, as dementia progresses, asymmetries develop in the brain anatomy. These in turn reflect the asymmetrical loss of neurons. In a long-term study, he and his colleagues have tracked these in the shape of brain structures, and searched for genetic markers that might be functionally implicated in their emergence. As they report in the journal Biological Psychiatry, they have indeed identified several statistically significant associations between specific genetic variants and progressive asymmetrical neuron loss in individuals with Alzheimer’s disease.

Based at LMU’s Clinic for Child and Adolescent Psychiatry, Psychosomatics and Psychotherapy, Wachinger leads a junior research group on artificial intelligence in medical imaging (AI-Med). The new study made use of 6395 magnetic resonance images acquired over a period of 9 years from 1241 patients who had been diagnosed with Alzheimer’s disease. Using the program BrainPrint, which Wachinger developed earlier, the team quantified the degree of asymmetry of specific brain structures in the patient population at various timepoints. The anatomical results were then compared with genetic data from the same patients, focusing on single-site variants in 21 specific genes which had previously been linked with an increased risk for late-onset Alzheimer’s disease in genome-wide association studies, and 10 others that appear to affect the relative volumes of certain brain substructures but had not been directly related to Alzheimer’s risk per se. “The question we wanted to answer was whether there are genetic factors that make the brains of Alzheimer’s patients particularly prone to asymmetrical neuron loss,” Wachinger explains.