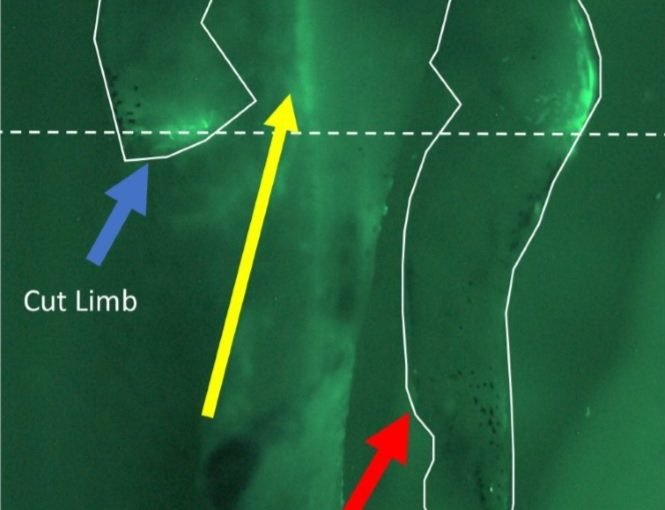 In research that extends knowledge about the physiology of regeneration and wound repair, Tufts University biologists have discovered that amputation of one limb is immediately reflected in the bioelectric properties of the contralateral, or opposing, un-damaged limb of developing frogs. The pattern of bioelectric depolarization in the un-injured leg is directly correlated to the position and type of injury, indicating that information about damage to tissues is available to their symmetrical counterparts within about 30 seconds of injury. The newly discovered phenomenon, dubbed “bioelectric injury mirroring” or BIM, is described in detail in a paper to be published next week in the journal Development.

Bioelectric phenomena are caused by cells that produce a voltage potential across their membrane by actively pumping or passively diffusing charged ions into or out of the cell. Most cells are capable of doing this, and patterns of high and low voltage potentials help direct the proliferation and differentiation of cells, as well as the patterning of tissues and organs, during embryonic development. Bioelectric states have also been implicated in regeneration—researchers have been able to alter bioelectric state to induce the regeneration of tails on tadpoles that had already matured beyond the capability of regeneration.

Studies of the bioelectric contribution to regeneration have largely focused on the region around the wound. “However, we wanted to look a little further,” said Sera Busse, the study’s first author who conducted the research as an undergraduate student before graduating with a degree in biology from Tufts in May 2018. “We know that bioelectric potentials can exhibit symmetrical patterns. We asked whether it was possible that the patterns resulting from injury might also be reflected symmetrically, at a distance.”

Busse, post-doctoral scholar Patrick McMillen, Ph.D., and Michael Levin, Ph.D., the Vannevar Bush Professor of Biology in the School of Arts & Sciences and Director of the Allen Discovery Center at Tufts, devised experiments using a fluorescent dye that can reveal the pattern of electrical depolarization in the upper layer of skin.

When Busse amputated the limbs of froglets still in regeneration stage, the dye revealed a remarkable phenomenon: The un-injured leg exhibited bioelectric states that mirrored the location and type of injury occurring on the opposite side, and the effect was immediate, occurring within 5 seconds.

“What was amazing about this result was that not only did the depolarization in the un-injured leg detect the presence of injury on the other side, it also reflected information about the position of the cut,” said Levin.

“Looking ahead, we will be employing more precise genetically-encoded voltage sensing tools, which can provide more quantitative and deeper tissue information than dyes, and machine learning methods to extract signatures of different types of damage from the bioelectric signal, to provide a more highly resolved understanding of the BIM phenomenon,” said Levin. Next steps involve understanding the mechanism and information content of such long-range signaling in the body, and potentially developing surrogate-site diagnostics for many different disease conditions.