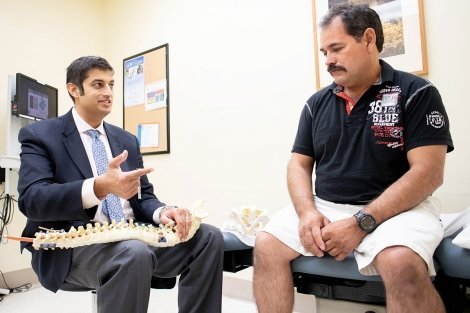 Matt Wetschler was bodysurfing at Ocean Beach in San Francisco when he went for a wave and didn’t come back up. Some other surfers saw his body floating like a log and pulled him ashore.

He was lucky: an ICU nurse happened to be walking along the beach and started CPR. By the time the ambulance arrived and shocked him, he had a heartbeat again. But his injury was serious – he’d fractured two vertebrae in his neck from hyperextension.

Wetschler was rushed to Zuckerberg San Francisco General Hospital and Trauma Unit (ZSFG), where he became the first patient to undergo an innovative new protocol for treating severe spine injuries.

“For many, many years, these injuries were believed to be irreversible, that if the spinal cord was injured, it was not coming back. We’ve been able to disprove that notion,” said Sanjay Dhall, MD, a UC San Francisco associate professor of Neurological Surgery and director of Spinal Neurotrauma at ZSFG.

The new protocol, based on research by Dhall and others, is a mixture of revised evaluations and new treatments to personalize care that, in Wetschler’s case and others, spurred quicker recoveries.

When a spinal injury patient enters a hospital, one of the first needs is to evaluate the extent of the injury.

Up until recently, the main way to evaluate a spinal cord injury was using physical tests that measure a patient’s ability to feel and move their arms and legs. This isn’t always a very accurate indicator, especially immediately after an injury.

“Very often, spinal injury patients have other injuries, they may have broken arms or legs, they may have a head injury, they may be unconscious – there’s several reasons why it can be hard to get a good exam on patients,” Dhall said. 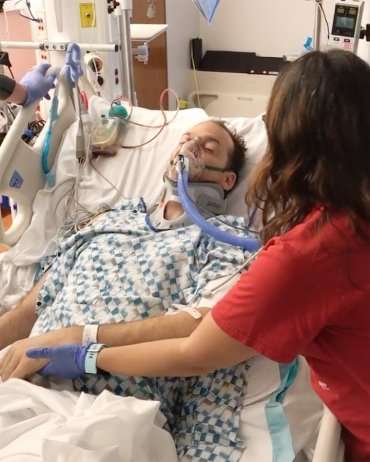 Part of the new protocol that Dhall created is based on a recent study that found the most important factor in a patient’s recovery is actually related to blood pressure in the spine.

“Traditionally what we’ve done is artificially raise everybody’s blood pressure exactly the same way, whether they’re 25 or 65, whether they’re young and healthy, or older and have heart problems or other issues,” says Dhall.

But in this study researchers actually measured each individual patient’s blood flow to the spine. Then doctors only artificially boosted blood pressure as needed to reach an individual’s unique resting pressure.

“Each patient has a different interspinal pressure,” said Dhall, and “our hope is that we’ve found a safer way to get the blood pressure or the blood flow to the spinal cord to the optimal point while minimizing potential harm.”

So Dhall took this data, along with other important lessons from his research, and developed a new protocol for treating spinal cord injuries. He says they call it “Code SCI” (spinal cord injury). “It’s sort of like ‘Code Stroke,'” said Dhall. “The ER doctors know to activate a system to get things moving quickly.”

The other game-changing aspect of the new protocol is getting patients who need surgery into the operating room as soon as possible, ideally within 12 hours of the injury. Whereas in earlier years within two days was considered “early surgery” for spinal injuries. The waiting could have been for such things as waiting to evaluate a patient’s mobility when he or she wakes up.

The urgency of the new protocol benefited Wetschler enormously. He was on the operating table about four hours after his injury.

Surgeons performed a laminectomy on the neck vertebrae C3 through C5, removing part of the vertebra bone to decompress the spinal cord. They also fused the C2 through C5 vertebrae to stabilize his neck.

About a month and a half after his surgery, Wetschler took his first steps using a walker.

“I cried,” he said. “It was very emotionally overwhelming. When something so meaningful is taken from you to get it back when it wasn’t certain, it’s beautiful.”

Within four months of the injury, Wetschler regained nearly all his motion control. He can walk over a mile without exhaustion, climb stairs, lift weights – and he’s working on his hand dexterity.

“I think it has to go to say that just my quick and uncharacteristically full recovery so far is a testament that with the right candidates, urgent or an emergent spinal surgery followed by aggressive spinal cord pressure management can really benefit people.”

Dhall says the hospital has since applied the protocol to more than 10 other spinal cord patients, and the results so far are very compelling.

“This is actually not a study, this is not a trial, this is what is now our standard of care,” Dhall said, noting that he’s received a few interested calls from other neurologists.