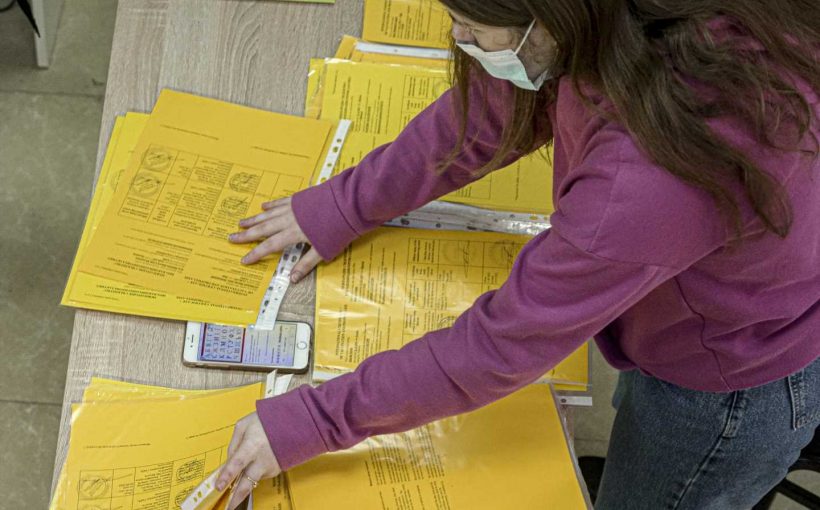 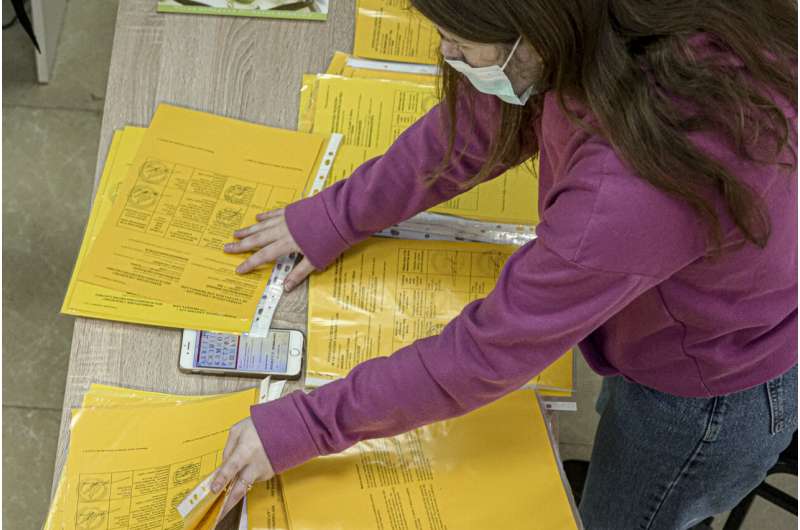 Truck driver Andriy Melnik never took the coronavirus seriously. With a friend, he bought a fake vaccination certificate so his travel documents would appear in order when he hauled cargo to other parts of Europe.

His view changed after the friend caught COVID-19 and ended up in an intensive care unit on a ventilator.

“It’s not a tall tale. I see that this disease kills, and strong immunity wouldn’t be enough—only a vaccine can offer protection,” said Melnik, 42, as he waited in Kyiv to get his shot. “I’m really scared and I’m pleading with doctors to help me correct my mistake.”

He added: “Death from coronavirus appears much closer than I imagined.”

Ukraine is suffering through a surge in coronavirus infections, along with other parts of Eastern Europe and Russia. While vaccines are plentiful, there is a widespread reluctance to get them in many countries—though notable exceptions include the Baltic nations, Poland, the Czech Republic, Slovenia and Hungary.

The slow pace of vaccinations in Eastern Europe is rooted in several factors, including public distrust and past experience with other vaccines, said Catherine Smallwood, WHO Europe COVID-19 incident manager.

“At the end of the day, we’re seeing low vaccine uptake in a whole swath of countries across that part of the region,” she told The Associated Press. “Historical issues around vaccines come into play. In some countries, the whole vaccine issue is politicized, in any case.” 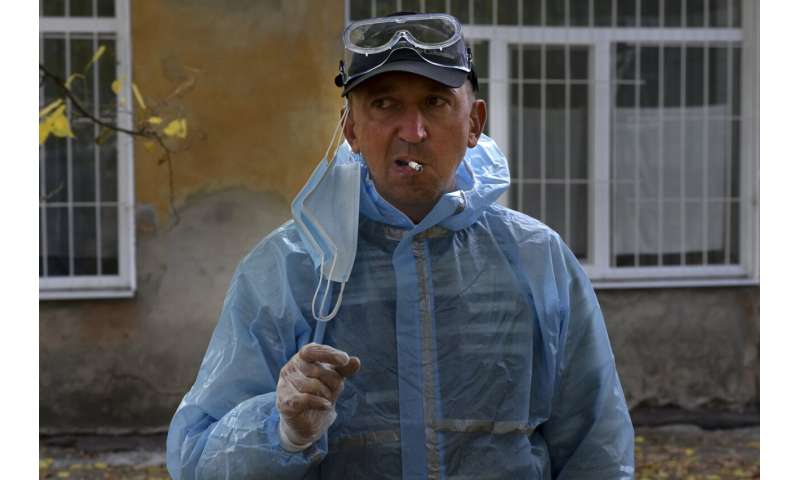 Russia on Wednesday recorded 1,123 deaths in 24 hours—its largest daily toll since the pandemic began—with only about a third of the country’s nearly 146 million people fully vaccinated. The Kremlin ordered a national nonworking period starting this week and lasting until Nov. 7.

In Ukraine, only 16% of the adult population is fully vaccinated—the second-lowest share in Europe after Armenia’s rate of slightly over 7%.

Authorities in Ukraine are requiring teachers, government employees and other workers to get fully vaccinated by Nov. 8 or face a suspension of their pay. In addition, proof of vaccination or a negative test is now needed to board planes, trains and long-distance buses.

This has created a booming black market in counterfeit documents. Fake vaccination certificates sell for the equivalent of $100-$300. There’s even a phony version of the government’s digital app, with bogus certificates already installed, said Mykhailo Fedorov, minister for digital transformation. 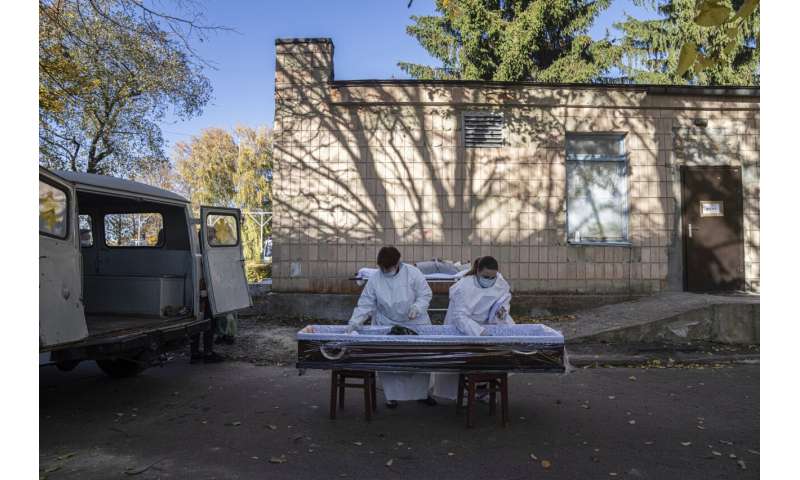 Last week, President Volodymyr Zelenskyy chaired a meeting on how to combat the counterfeits. Police said they suspect workers at 15 hospitals of being involved in issuing false vaccination documents.

Police have opened 800 criminal cases into such fakes and deployed 100 mobile units to track down their holders, said Interior Minister Denys Monastyrsky. They even caught a former lawmaker who had produced a fake vaccination document upon returning to Ukraine last week.

The low vaccination rate has led to the rapid spread of COVID-19, putting new stress on the country’s already-overworked health care system.

The surgical ward of a hospital in the town of Biliaivka, near the Black Sea port of Odesa, is now treating only coronavirus patients, with 50 of its 52 beds filled. Drugs and oxygen are in short supply, and some hospital personnel are leaving their jobs. 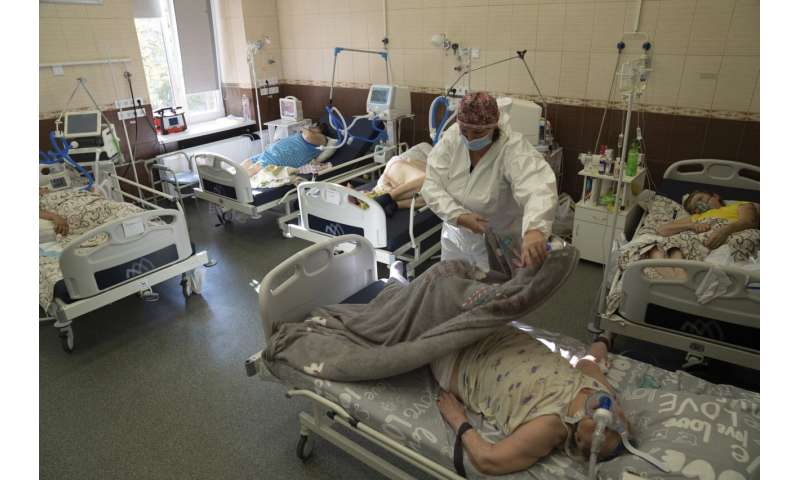 “We are on the verge of catastrophe, pushed by aggressive opponents of vaccination and the lack of funds,” said Dr. Serhiy Shvets, the head of the ward. “Regrettably, five workers of my ward have quit over the past week.”

The situation looks similar at a 120-bed hospital in the western city of Chernivtsi, where Dr. Olha Kobevko says she has 126 patients in grave condition.

“I’m weeping in despair when I see that 99% of patients in serious condition with COVID-19 are unvaccinated, and those people could have protected themselves,” the infectious disease specialist told AP. “We are left struggling to save them without sufficient amount of drugs and resources.”

The current surge seems especially lethal, Kobevko said, with 10-23 patients dying daily at her hospital, compared with fewer than six per day last spring. The share of patients in their 30s and 40s has grown considerably, she added. 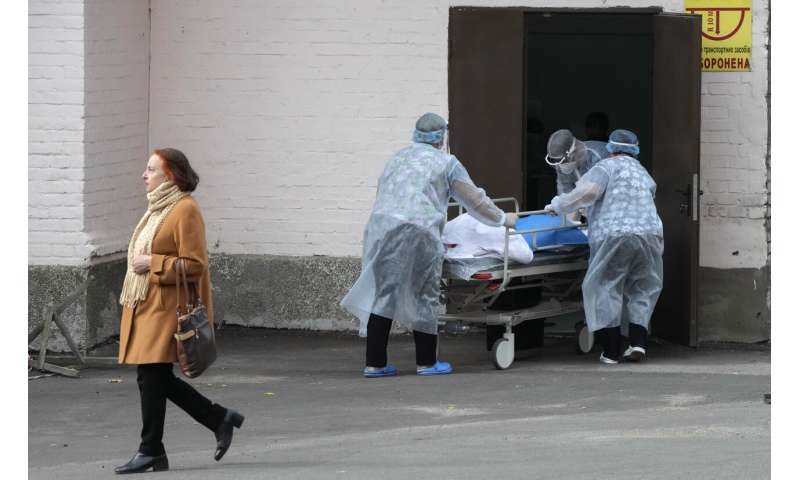 “Fake stories have spread widely, making people believe in microchips and genetic mutations,” Kobevko said. “Some Orthodox priests have openly and aggressively urged people not to get vaccinated, and social networks have been filled with the most absurd rumors. Ukrainians have learned to distrust any authorities’ initiatives, and vaccination isn’t an exclusion.”

Lidia Buiko, 72, chose to get the Chinese Sinovac shot, citing a falsehood that the Western vaccines contained microchips to control the population.

“Priests have urged us to think twice about getting immunized—it would be impossible to get rid of the chip,” she said as she waited in Kyiv.

Vaccine hesitancy exists even among medical workers. Shvets said 30% of the employees at his hospital in Biliaivka have refused the shots, and Health Minister Viktor Lyashko admitted that about half of Ukrainian medical workers are still reluctant to get them. 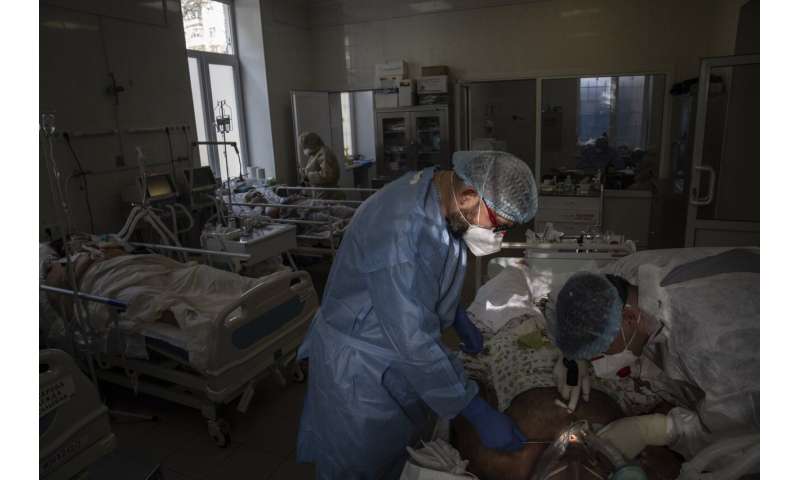 “The risks of misinformation to vaccination have never been higher -– nor have the stakes,” he said.

In Romania, where about 35% of adults are fully immunized, tighter restrictions took effect this week requiring vaccination certificates for many daily activities, such as going to the gym, the movies or shopping malls. There’s a 10 p.m. curfew, shops close at 9 p.m., bars and clubs will close for 30 days, and masks are mandatory in public.

So many are “afraid of the vaccines because of the immense (amount of) fake information that has flooded social media and TV,” said Dr. Dragos Zaharia of Bucharest’s Marius Nasta Institute of Pneumology. 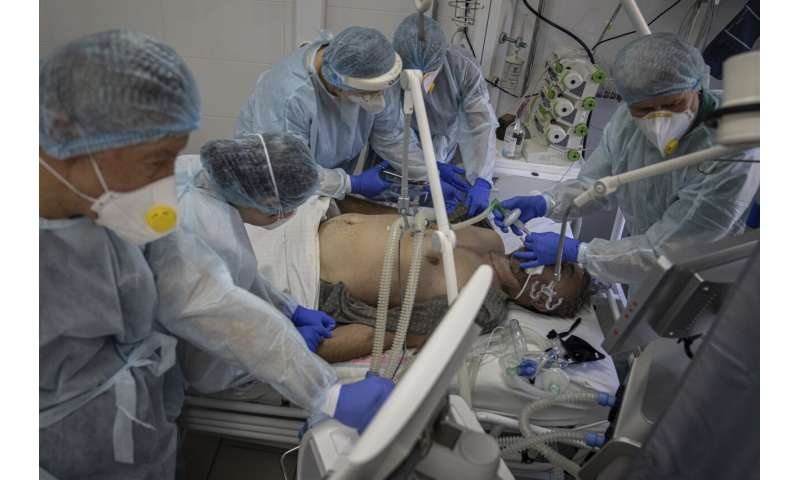 “Every day, we see people arriving with shortness of breath and most of them are feeling sorry for not being vaccinated,” he told AP. “Every day we see people dying in our ward. We see scared people.”

Bulgaria, with only a quarter of the adult population fully vaccinated, also reported record infections and deaths this week. According to official data, Bulgaria has had the highest COVID-19 mortality rate in the 27-nation European Union in the past two weeks, and 94% of those deaths were of unvaccinated people.

Only 33% of Georgia’s population has been fully vaccinated, and authorities launched a lottery with cash prizes for those getting shots. Still, Dr. Bidzina Kulumbegov bemoaned the slow pace of vaccinations.

The government’s information campaign “was not designed according to the peculiarities of our country. The emphasis should have been done, for instance, on the Georgian Orthodox Church, because we have many instances when priests are saying that vaccination is a sin,” Kulumbegov said in televised remarks. 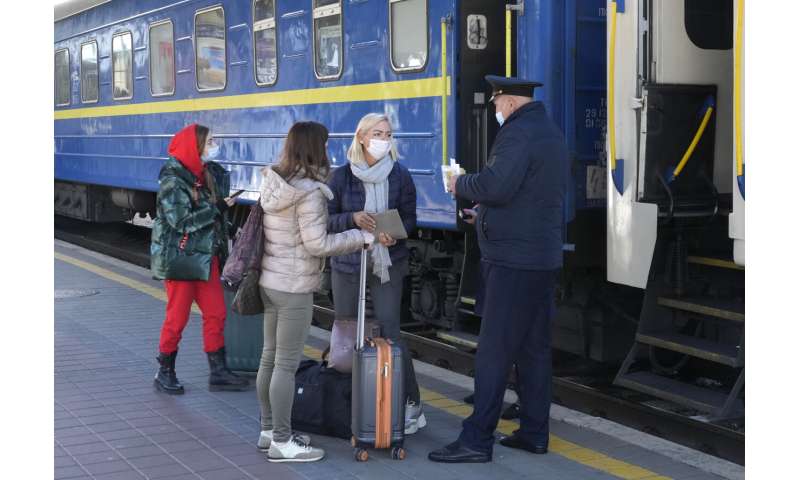 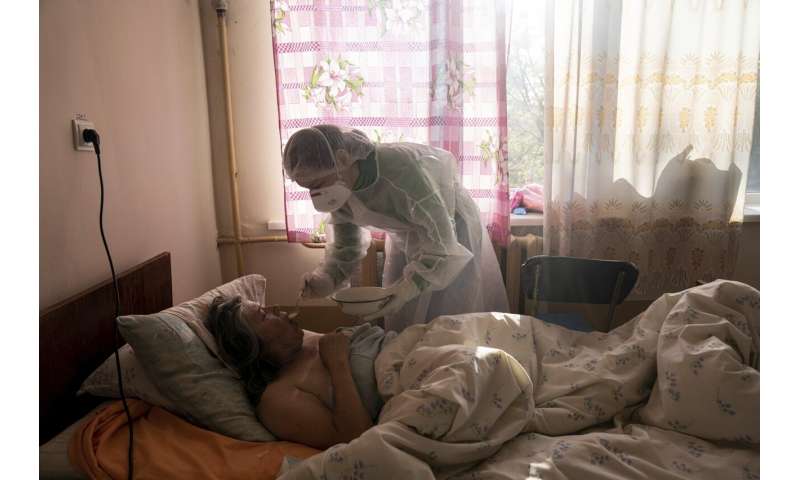 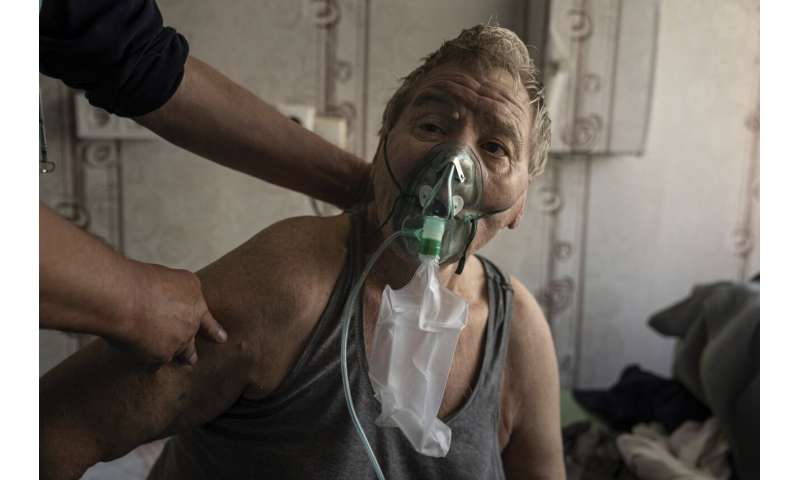 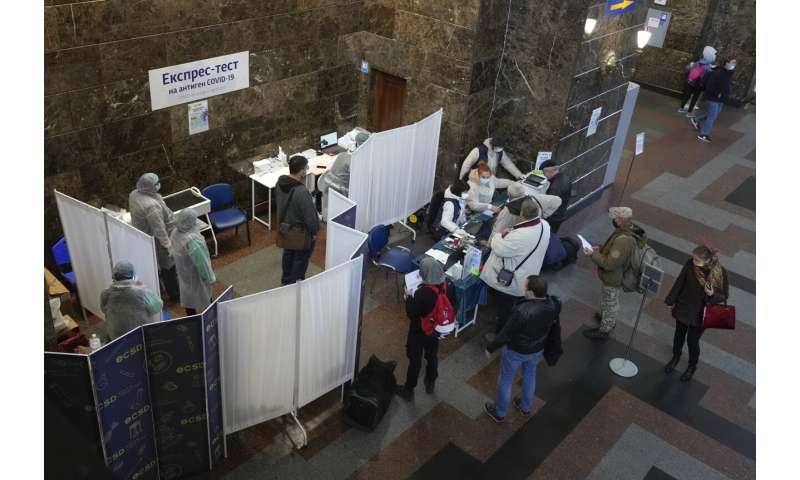 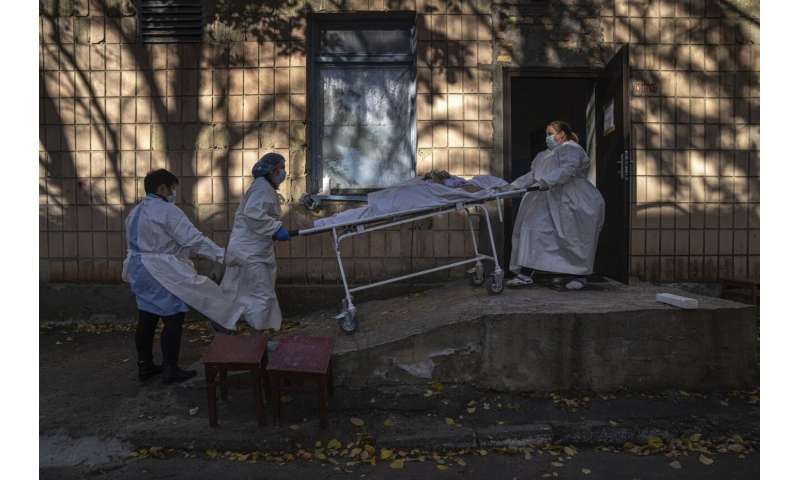 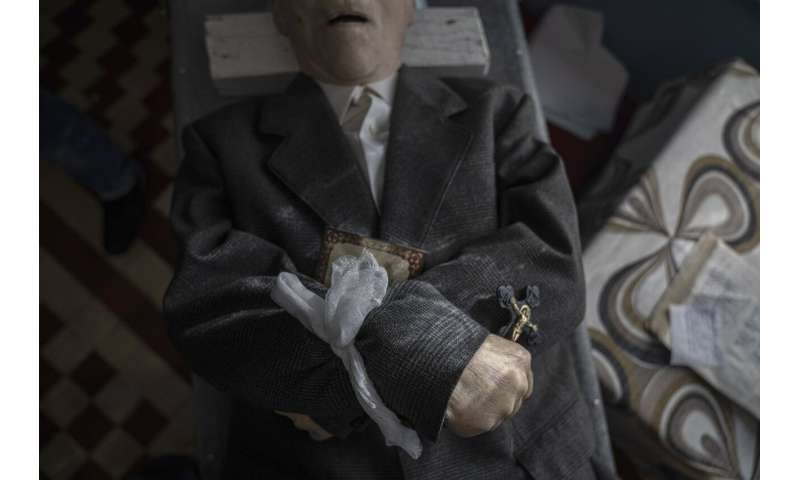 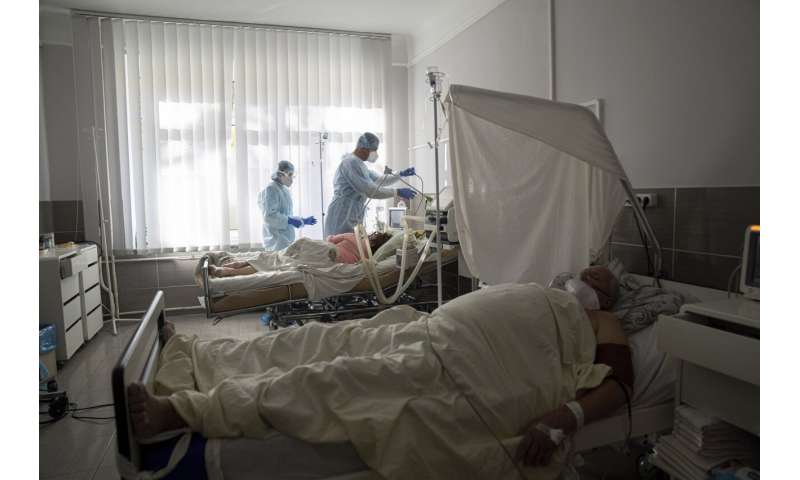 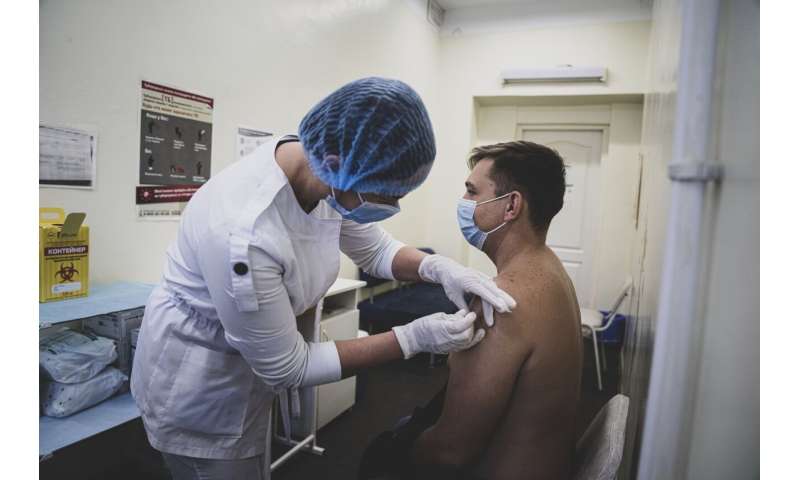 For Melnik, the Ukrainian truck driver, the fear of getting COVID-19 outweighed all his other concerns.