Home » Health News » The 20 laziest nations in the world 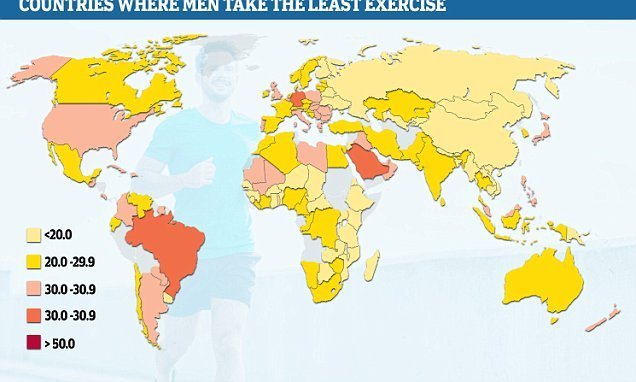 The 20 laziest nations in the world

The lazy map of the world: Laziest 20 nations are named and shamed with the UK in the top third of the worst performers (so, where does your country rank?)

The laziest 20 nations in the world have today been named and shamed in a major new report of exercise levels across the globe.

Kuwait has the lowest levels of physical activity – with 67 per cent of its population failing to hit recommended targets.

At the other end of the scale, just 5.5 per cent of people in Uganda don’t do enough exercise to keep themselves healthy.

The findings, released by the World Health Organization, also ranks Britain as 46th out of 168 countries in its league table. The US was even higher. 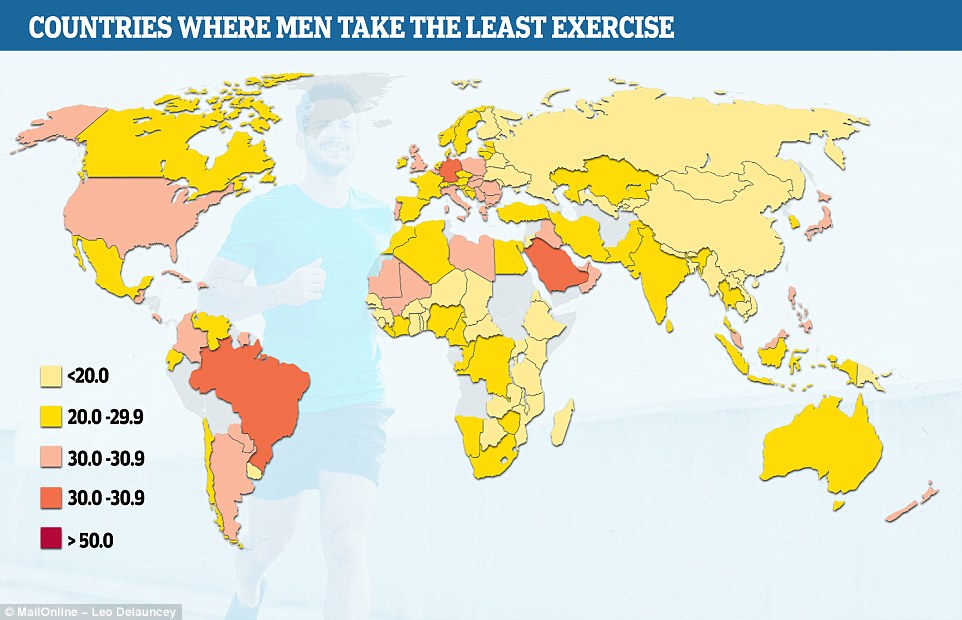 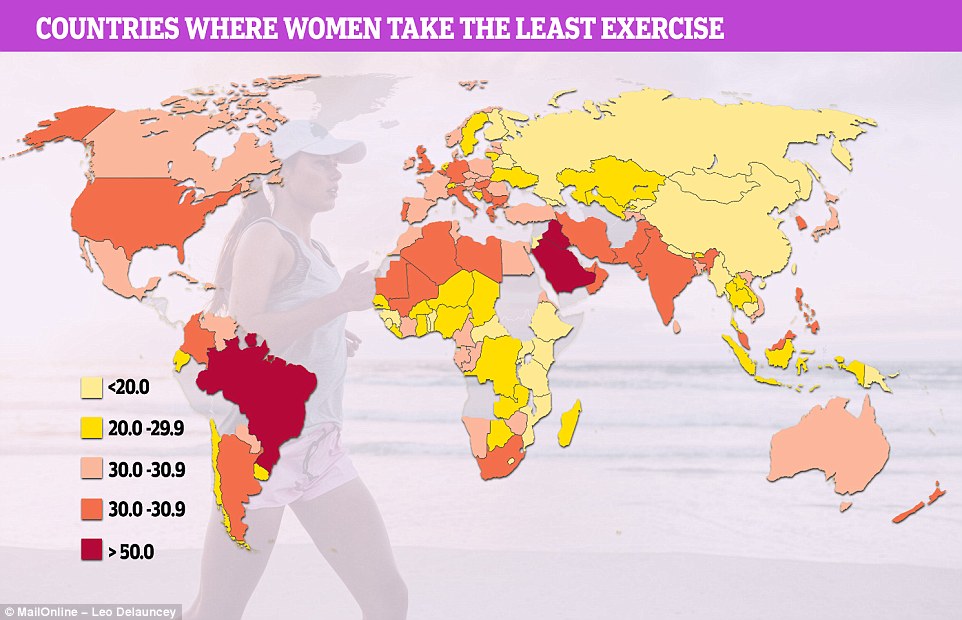 Globally, 32 per cent of women and 23 per cent of men fail to hit the activity target, according to the major report by the WHO, published in the Lancet medical journal (graph shows the results for women) 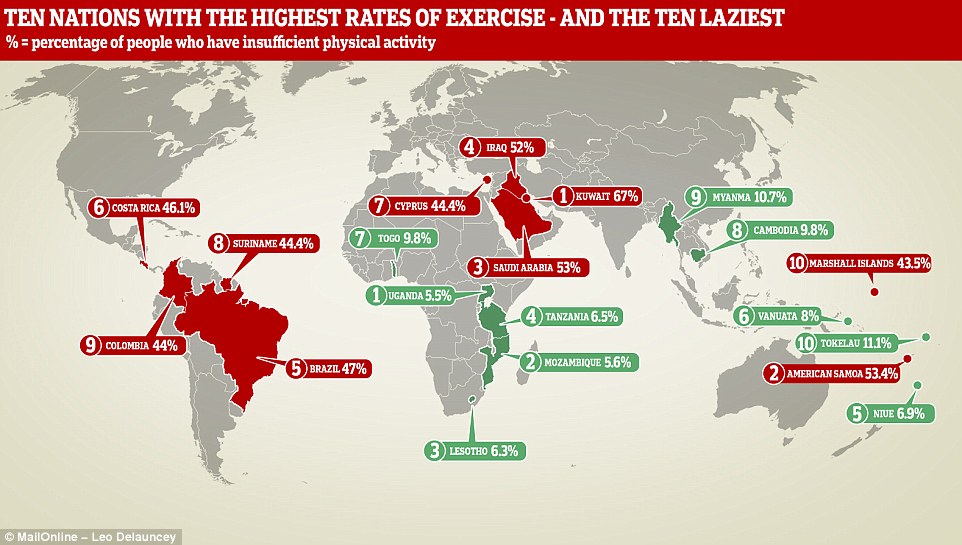 Some 36 per cent of Britons are putting their health at risk by not doing at least 150 minutes of moderate exercise each week.

But women appear to be lazier than men – with 40 per cent of women and 32 per cent of men failing to hit physical activity targets.

Experts have described the figures as a ‘damning indictment’ of the nation’s health.

The WHO urges people to do least 150 minutes of moderate exercise a week, such as cycling or brisk walking, or 75 minutes of vigorous exercise, like running.

WHERE ARE THE 20 NATIONS THAT EXERCISE THE LEAST?

More British adults fail to hit these targets than people in Africa, South America and most of Asia. In poorer countries, people tend to have to walk further distances and are more active in their jobs, while those living in rich countries often have sedentary lifestyles and are reliant on public transport.

But they are also less active than in comparable Western nations such as France, Spain, Australia and Canada.

The US is even more inactive than the UK, with 40 per cent of adults not doing enough exercise, while the figure for Italy is 41 per cent.

The WHO report, published in the Lancet medical journal, revealed the global average of insufficient activity was 27 per cent.

More than half of adults don’t take part in enough exercise in American Samoa (53.4 per cent), Saudi Arabia (53 per cent) and Iraq (52 per cent).

While, alongside Uganda, there are six other nations where insufficient activity is below 10 per cent: Mozambique, Lesotho, Tanzania, Niue, Vanuatu and Togo.

Experts believe women around the world tend to be more inactive than men because they participate in fewer sports and leisure activities – and when they do exercise they do it at a lower intensity.

Experts are worried that a growing crisis in inactive lifestyles is putting millions at risk of cancer, diabetes and heart disease. 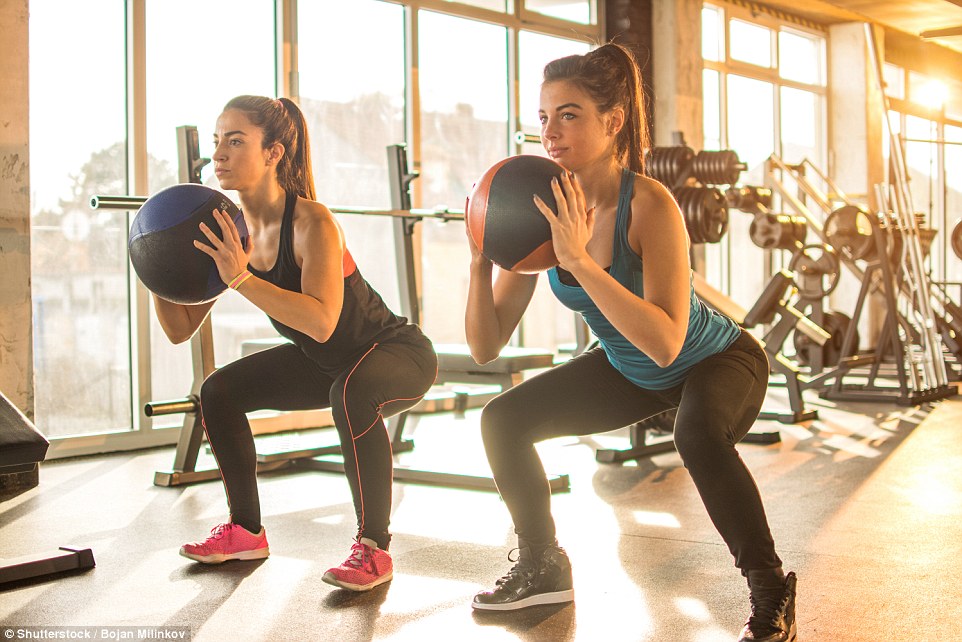 The WHO urges people to do least 150 minutes of moderate exercise a week, such as cycling or brisk walking, or 75 minutes of vigorous exercise, like running

WHERE ARE THE 10 NATIONS THAT EXERCISE THE MOST?

Steven Ward, of the UK Active organisation, said: ‘These figures are a damning indictment of our nation’s health, with the UK lagging behind much of the rest of the world for activity levels.

‘Physical inactivity is the cause of 37,000 premature deaths in the UK each year and costs our economy an estimated £20 billion.

‘This should be seen as a national disgrace.

‘The Government must make physical activity a top-tier health priority… or risk facing an unsustainable burden on both the NHS and social care.’

The figures come after a Public Health England report, published yesterday, found 78 per cent of over-30s have hearts that are more damaged than they should be for their age, putting them at greater risk of early death.

Experts are particularly worried about inactive middle-aged people in their 40s, 50s and 60s who continuously put their busy lives ahead of the needs of their health.

Scientists wrote in the WHO report: ‘Our analysis, including data from nearly 2 million participants, shows that globally in 2016 more than a quarter of all adults were not getting enough physical activity.

‘This puts more than 1.4 billion adults at risk of developing or exacerbating diseases linked to inactivity, and needs to be urgently addressed.’

The report, published in the Lancet medical journal, called for ‘more opportunities for safe and accessible leisure-time activity to women in order to increase their overall levels of activity’.