Stenoparib, which is a small molecule that is also known as 2X-121, is an inhibitor of mammalian poly (ADP-ribose) polymerases (PARPs). Stenoparib inhibits viral replication by affecting the pathways of the host; thus, it is a host-targeting therapeutic.

A new study published on the preprint server bioRxiv* assesses the antiviral activity of stenoparib against four severe acute respiratory syndrome coronavirus 2 (SARS-CoV-2) variants of concern (VOCs). This study also focuses on the inhibition of the SARS-CoV-2 Alpha variant by a combination of stenoparib and remdesivir. 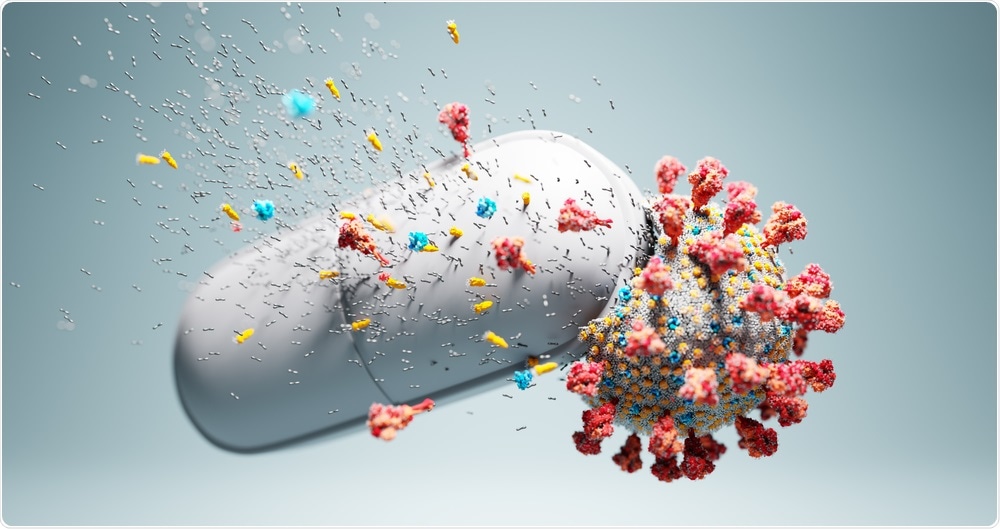 Previous in vitro studies have shown that stenoparib inhibits SARS-CoV-2 USA-WA1/2020 and the human coronavirus-NL63 (HCoV-NL63), which is a human seasonal respiratory coronavirus. To this end, this agent suppresses virus multiplication and cell to cell spread in a dose-dependent manner.

SARS-CoV-2 strains were mixed with serial dilutions of stenoparib and transferred to Vero E6 green monkey kidney cells. The ViroSpot assay was performed to estimate positive staining for the virus.

Stenoparib inhibited virus replication in a dose-dependent manner across all four tested strains of SARS-CoV-2. Interestingly, a higher concentration of stenoparib was required to inhibit the Beta variant, even when used in combination with remdesivir. This may be because the Beta variant replicates rapidly and has a reduced time period between infection and the appearance of the mature virus within the cell.

The researchers of the current study also evaluated the inhibitory action of a combination of stenoparib and remdesivir against the Alpha variant. Vero E6 cells were infected with the Alpha variant, which was followed by an assessment of the activity of stenoparib using the plaque reduction assay. Plaques are areas of dead or destroyed cells that appear as small, clear regions in an infected cell monolayer after staining.

For the analysis, lower doses of stenoparib were combined with the previously reported 50% effective concentration (EC50) of remdesivir. Neither stenoparib nor remdesivir achieved greater than a 50% reduction in plaquing efficiency compared to the infected, untreated cells.

When combined, the drugs acted synergistically and plaque inhibition increased to over 90%. This activity was superior to what was achieved with either drug alone. Notably, this combination did not cause significant cytotoxicity.

Since both remdesivir and stenoparib have two different mechanisms of action, the combined effect of these drugs appears to be synergistic. This provides the potential benefit of minimizing undesirable side effects by reducing individual doses of each drug.

Dose-response curves for stenoparib and remdesivir on SARS-CoV-2 variants. A. stenoparib. B. remdesivir. Vero E6 cells (ATCC CRL-1586) were infected for 20 hours with SARS-CoV-2 wild type (wt) or the indicated variants in the presence or absence of stenoparib or remdesivir as indicated. Results are the average fraction of quadruplicate wells that exhibited positive staining for SARS-CoV-2 (y-axis) vs. the concentration of the inhibitors (x-axis). These data were used to estimate the EC50 of stenoparib and remdesivir. The EC50 values were approximated with the aid of the online calculator from AAT Bioquest (“Quest Graph™ EC50Calculator.” AAT Bioquest, Inc, 26 Oct. 2020, https://www.aatbio.com/tools/ec50-calculator). Viruses; wild-type (wt): BetaCoV/Munich/BavPat1/2020, European Virus Archive Global. Alpha: USA/CA_CDC_5574/2020, BEI Resources, Cat# NR-54011. Beta: hCoV-19/South Africa/KRISP-K005325/2020, BEI Resources. Gamma: hCoV-19/Japan/TY7-503/2021 (Brazil P.1), BEI Resources.

PARP enzymes have a role in DNA repair; however, several members of the PARP family have other additional functions. The 18 known human PARPs appear to affect viral replication differentially; while some exhibit proviral activity, others exhibit antiviral activity.

The SARS-CoV-2 nucleocapsid (N) protein is mono ADP ribosylated (MARylated) during infection. The stability of the N protein is essential for viral replication and modulation of the host cell cycle.

Until now, the N protein is the only ADPR target identified in SARS-CoV-2. This modification is prevalent across multiple coronavirus families; thus, ADPR may have a role in regulating virus genome structure.

Remdesivir and molnupiravir are known to inhibit the viral replicon, whereas stenoparib most likely acts through multiple targets. The current study provides a proof of concept that a combination of stenoparib and remdesivir or molnupiravir may be potent at inhibiting SARS-family coronaviruses, including SARS-CoV-2.

Importance of the study

SARS-CoV-2 has caused over 247 million infections and over 5 million deaths worldwide. Even with vaccination, the pandemic continues as newer SARS-CoV-2 variants may exhibit degrees of resistance to vaccination. Thus, there is a need for effective therapeutics.

Stenoparib effectively inhibits replication of SARS-CoV-2 wild-type and variant strains in vitro. A host-targeting drug like stenoparib may be beneficial for COVID-19 patients as a standalone therapy, or in combination with an antiviral drug such as remdesivir or molnupiravir.

Dr. Shital Sarah Ahaley is a medical writer. She completed her Bachelor's and Master's degree in Microbiology at the University of Pune. She then completed her Ph.D. at the Indian Institute of Science, Bengaluru where she studied muscle development and muscle diseases. After her Ph.D., she worked at the Indian Institute of Science, Education, and Research, Pune as a post-doctoral fellow. She then acquired and executed an independent grant from the DBT-Wellcome Trust India Alliance as an Early Career Fellow. Her work focused on RNA binding proteins and Hedgehog signaling.