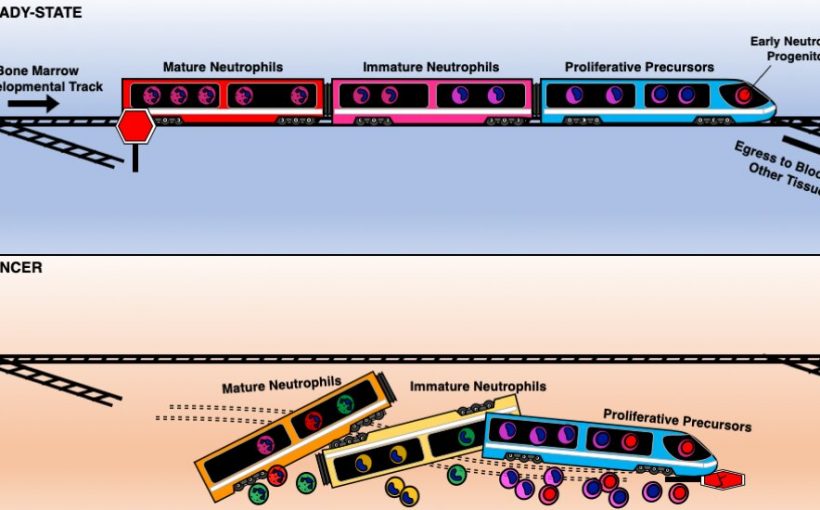 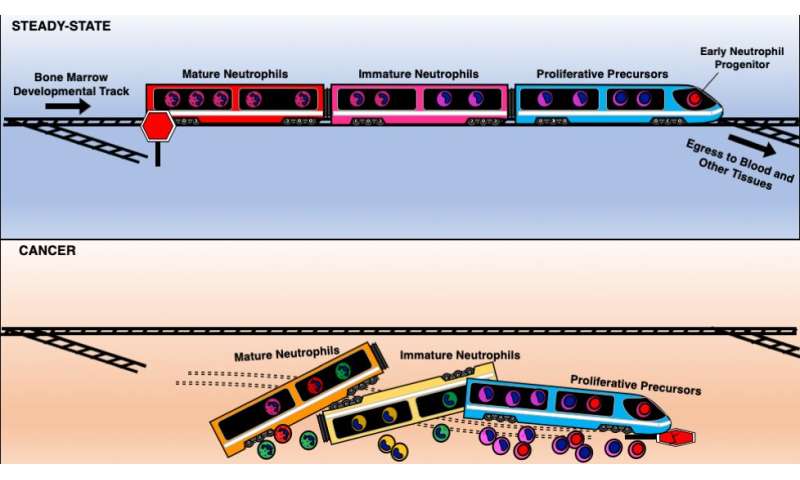 Neutrophils are the warriors of the immune system. They are always ready to spring to action to help heal injuries or fight off disease. Unless, that is, something goes wrong in their developmental process.

Now scientists at La Jolla Institute for Immunology (LJI) have tracked down the rare stem cells that generate neutrophils in human bone marrow. This research, published August 18, 2020, in Immunity, gives researchers a potential path for intervening in diseases where neutrophil development goes awry.

“We have identified the stem cells that are the early origins of neutrophils, the most abundant blood cell type in humans,” says Huy Dinh, Ph.D., a former LJI postdoctoral associate who recently moved to a faculty position at The University of Wisconsin-Madison. Dinh led the study with LJI Professor Catherine C. Hedrick, Ph.D. “Knowing how human neutrophils develop is especially relevant today because immature neutrophils have been found to be elevated in both the blood and lungs of severe COVID-19 patients.”

Despite their importance, neutrophils have proven very hard to study. They don’t hold up well outside the body, and the stem cells that make them are even harder to investigate because they only live in bone marrow.

In 2018, the Hedrick Lab reported the discovery of a group of “progenitor” stem cells that give rise to mature neutrophils. These progenitors’ sole job was to generate neutrophils, yet they appeared to also promote tumor growth. The researchers believed that detecting these progenitors could give doctors a better way to catch early cancer cases. But first, the team needed to know a lot more about neutrophil development.

The new research revealed a progenitor cell type that exists even earlier in human neutrophil development. Dinh, a past SPARK Award recipient, together with Tobias Eggert, Ph.D., a LJI visiting scientist and Melissa Meyer, Ph.D., a LJI postdoc, who served as the co-first authors in the study, spearheaded the effort to use a tool called cytometry by time-of-flight (CyTOF) to distinguish these rare cells from other types of immune progenitor cells. This work also made it possible for the researchers to identify more specific protein markers on this early progenitor cell surface.

The discovery of these protein markers was important because until now, scientists have used only a few of markers to track neutrophils over time. The new study gives scientists specific markers for tracking neutrophil development from day one.

Dinh likens the stages of neutrophil development to the cars on a train. The early progenitors are like the train engine, keeping everything going smoothly along the track to maturity. Cancer shakes everything up, and immature neutrophils jump off the track before they reach maturity. “It’s like the train is falling apart,” Dinh says.

Neutrophil development has been in the news recently due to the COVID-19 pandemic, as studies have shown immature neutrophils are also more abundant in some patients with COVID-19. Dinh and Hedrick think perhaps the threat of the virus prompts the body to churn out neutrophils too quickly, again forcing immature cells off the track to maturity.

“We need to study this phenomenon further to see if these neutrophils can be tied to case prognosis or if they can be a drug target for COVID-19,” says Dinh.