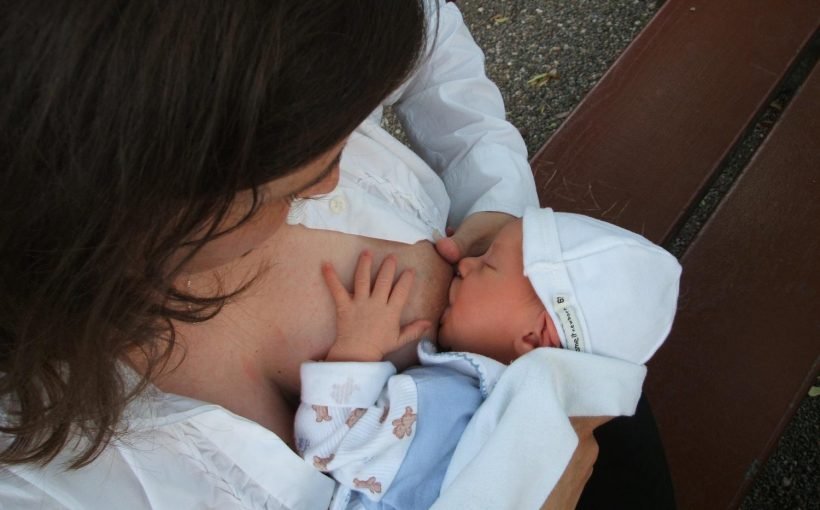 Overweight mothers are more likely than those classed as being of a healthy weight to stop breastfeeding in the first week after having a baby and less likely to continue past four months, according to a new study from the London School of Economics and Political Science and the University of Auckland.

Despite heavily promoted benefits to infant and maternal health, a very small percentage of all mothers in the UK meet World Health Organisation recommendations of exclusive breastfeeding for the first six months of life. While around 80 percent initiate breastfeeding, less than one-fifth of babies are breast fed exclusively to three months (17 percent) and very few (1 percent) are breast fed exclusively to six months.

The study of 17,113 mothers from the UK Millennium Cohort Study (MCS), a nationally representative longitudinal survey of live babies born in the UK between 2000 and 2002, found that of the sample, 70 per cent of mothers initiated breastfeeding. Once researchers accounted for background characteristics such as education level and age, they found that underweight, healthy weight, and overweight mothers are similarly likely to begin breastfeeding.

Dr. Tammy Campbell, Research Fellow at LSE’s Centre for Analysis of Social Exclusion, who authored the research, said: “Improving breastfeeding rates has been a priority for successive governments, so our findings can provide some tentative indications of one group of mothers who could potentially be helped. However, we caution against simplistic interpretations of our findings, and clumsy solutions, as mothers’ breastfeeding decisions and behaviours are complex and nuanced.

“Because we find no substantial differences in initiating breastfeeding between healthy/overweight women, we speculate that a substantial proportion of overweight women are likely to want to breastfeed – but have more difficulty doing so, and could benefit from good quality support.

“We would like to emphasise, though, that this support really does need to be good quality – practical and sensitive, for those who want it. Breastfeeding seems to be beneficial for those for whom it works – but experiences around it can be fraught and complex. We don’t want this research to be interpreted in a way that guilt-trips women, which can add to post-natal depression and other negative post-natal experiences, as this can obviously be very detrimental to mothers and babies. And we don’t want to advocate clumsy box-ticking or flagging, or deficit-based approaches to mothers. We think that interpreted sensitively, and with the right resources, our findings could help breastfeeding to work for more women.”

The researchers examined several mechanisms which might explain the tendencies of overweight mothers to cease breastfeeding early and continue for less time. They tested baby’s birth weight; pre-term birth; mother’s gestational diabetes; type of delivery; reported labour complications. These factors did not help to explain the patterns. They conclude that more research is needed to understand why overweight mothers stop breastfeeding sooner. The paper says: “Previous studies indicate, tentatively, that psychological factors such as body image may play a part in breastfeeding behaviours. Physiological explanations have also been proposed, such as dysregulation of the hypothalamic-pituitary-gonadal axis and in fat metabolism affecting milk production and composition. Low prolactin levels in response to infant suckling after initiating breastfeeding reducing the ability of overweight/obese women to produce milk is another possible explanation, along with delayed onset of lactation perhaps resulting in early cessation.”

Dr. Nichola Shackleton, co-author and Research Fellow at the University of Auckland, points out that, “exclusive breastfeeding can be a viable means of reducing the risk of childhood obesity and may help cognitive development. It can also result in a quicker return to normal BMI in the mother.”

The paper concludes: “Whatever the explanation for the associations, pre-pregnancy overweight may provide a useful means through which to target early postnatal support services, which have been indicated as effective in promoting initiation and continuation of breastfeeding.

“BMI at first antenatal appointment is easily and reliably measured. By prioritising overweight mothers for breastfeeding support, both in the initial period of establishment and in later months, services may reach those less likely to continue breastfeeding. This may prove an effective use of resources: both because of the estimated health benefits to breastfed babies and their mothers and because research suggests relationships between prenatal BMI and child BMI and cognitive development – associations within which breastfeeding may be a malleable mediating factor.”