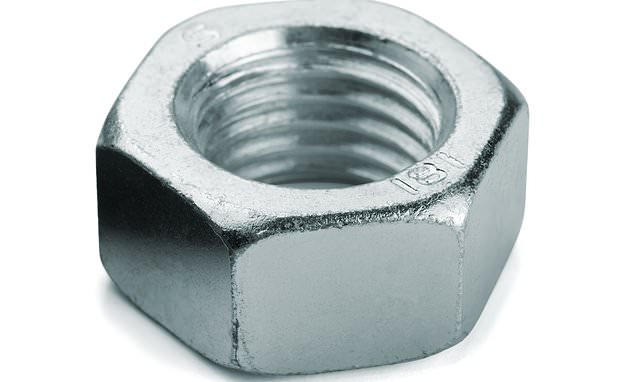 A man needed to have a metal nut removed from his penis after it got stuck when he put it on his member for sexual pleasure.

The unidentified 34-year-old, from Hong Kong, went to his nearest A&E department two days after the hex nut became lodged.

Doctors tried to slide it off using jelly and giving the man painkillers – but it proved unsuccessful. They did not reveal how big the nut was.

Instead, the team had to resort to using a diamond disc cutter to cut open the metal and relieve him of his ‘penile strangulation’. 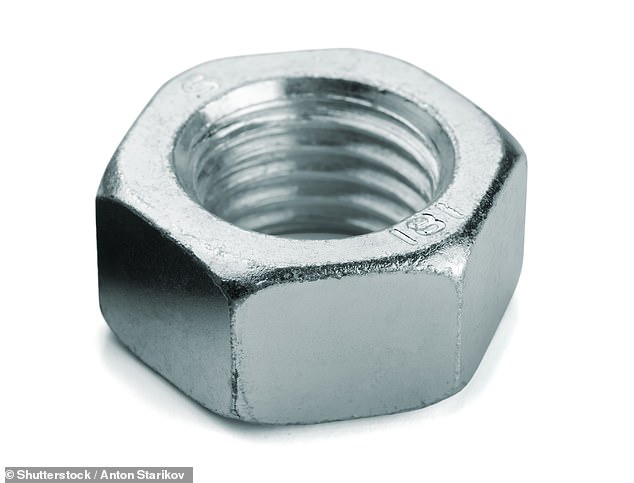 Gruesome pictures showed the doctors using the disc cutter on his penis. They revealed he suffered two ‘superficial’ cuts during the procedure.

Writing in the journal, the team led by Chloe Hui Tung Yu said: ‘Penile strangulation by constriction devices is a urological emergency.

‘Patients tend to try their own methods for removal, and present late due to embarrassment.’

They added if safer methods fail ‘electric metal cutting devices can be used with precautions taken’ to avoid further injuries.

The team added that diamond disc cutters are usually used medically by orthopaedic surgeons for the cutting of implants.

WHY IS PENILE STRANGULATION AN EMERGENCY?

Richard Viney, a urological surgeon in Birmingham, told MailOnline latex or elastic rings are easy to remove – but materials such as metal ‘can create real problems’.

He said: ‘As blood flows in the penis swells. If it swells to a diameter greater than the ring then the ring can’t be slid off.

‘You rapidly develop a vicious cycle of swelling causing greater constriction. Over time, the tissues themselves start to die.

‘This process makes this a medical emergency. The greater the swelling of the tissues the harder the removal becomes and the greater the damage done.’

Surgeons often make lots of small pinpricks to allow the tissue fluid to drain out. Once the swelling has been minimised the ring can be addressed.

Mr Viney added: ‘If you’re lucky it might slip off but this is rare. Usually it needs to be cut off and that means a trip to theatre.’

Dr Hui Tung Yu and colleagues admitted electric cutting tools ‘have an associated risk of injury to the penis and surrounding structures’.

However, they said the tools are more efficient and successful in removing items that constrict the penis ‘where time is of the essence’.

Discussing the case, the team of three medics revealed the man attended hospital in April 2018 complaining of penile swelling.

They wrote: ‘He had applied a metal hex nut over the root of his penis two days [before] for sexual pleasure but was unable to remove it afterwards.

‘There was increase in penile swelling and pain. He was able to void (urinate) without difficulty.’

The head of his penis and foreskin were ‘severely oedematous’ – the medical term for an excessive build-up of fluid.

He also had a 4cm-long skin abrasion where his penis had been strangled by the nut, with some adjacent dead tissue.

Two attempts to slide the nut off the penis failed – both used a jelly substance and heavy painkillers.

One of the procedures was performed under general anaesthetic because the man said he could not tolerate the pain.

Medics even punctured 20 holes in his swollen foreskin to try and drain some of the swelling to make it easier to come off.

But Dr Hui Tung Yu and colleagues wrote: ‘The penile skin was still oedematous, and the metal nut could not be removed.’

Surgeons packed gauze between the nut and penile skin before they cut it off using a Stryker disc cutter ‘for protection’.

He suffered two light cuts to the skin during the 94-minute procedure – they were 1cm and 2cm-long, respectively.

Despite the lacerations, the metal nut was successfully removed, the team of doctors wrote in the medical report.

The patient stayed in hospital for five days to keep an eye on his fever, before being given a two-week course of antibiotics.

Doctors noted how the tip of his penis was ‘well perfused’ – but said he still had a patch of skin damaged by the strangulation.

The man told doctors a month after his horrific ordeal that he was able to achieve an erection but had not yet had any sexual activity.

Writing in the journal, the medics added: ‘Penile rings are used to improve or maintain erection.

‘A penile ring is usually worn at the base of the penis, aiming to restrict blood flow away from the penis for a stronger erection or one that lasts longer.

‘However with prolonged application, reduced venous and lymphatic drainage may result in oedema, swelling and pain of the penis.

‘Subsequent removal may be difficult, and the vicious cycle will continue with further compromise of arterial flow, resulting in ischemia with tissue necrosis.’