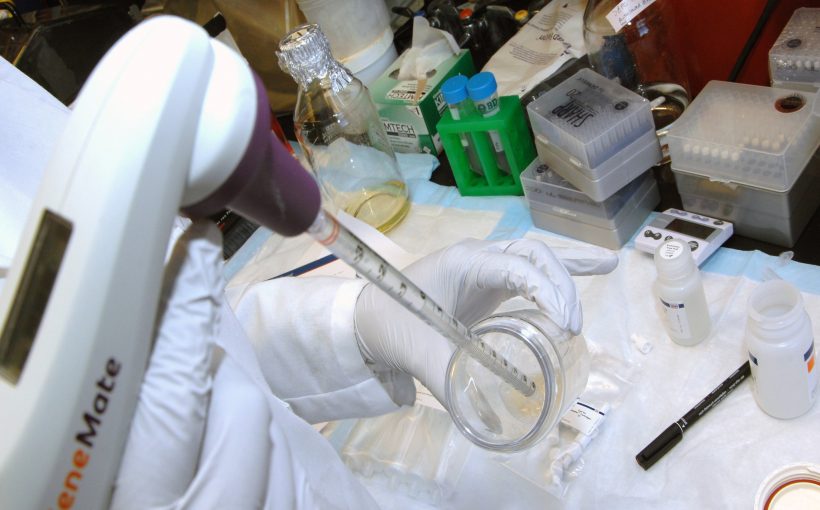 Preterm birth remains a global epidemic linked to a lifetime of potential health complications. It also is difficult to study in living creatures—especially the uniquely precise biology of preterm birth in humans.

Researchers report in PLoS Biology successfully inserting just enough human DNA into transgenic laboratory mice that it allowed the team to study a unique part of human pregnancy compared to other animals.

As a result, the scientists at the Cincinnati Children’s Perinatal Institute and Department of Pediatrics at the University Of Cincinnati College Of Medicine discovered what controls expression of a stress hormone called corticotrophin-releasing hormone (CRH) in the placenta. The placenta supports the fetus and provides communication with the mother.

CRH expression levels are linked to birth timing in humans and indicate whether a pregnancy will be preterm, post-term, or the normal term of 37-42 weeks. Unfortunately, pregnant mice and other non-primate species don’t naturally express CRH in the placenta. The scientists had to figure out how to get the animals to incorporate the genetic machinery needed to express the hormone.

This is important because researchers still don’t know what CRH does in the placenta during pregnancy. Having transgenic mice with the necessary human DNA to express CRH in the placenta should help them find out, according to Louis Muglia, MD, senior investigator on the study, Co-Director of the Perinatal Institute and Director of Human Genetics at Cincinnati Children’s.

“The challenge with studying human pregnancy is the typical biomedical approach requires a relevant animal for research,” Muglia said. “It’s been done for cancer and many other diseases. The problem is pregnancy in humans is different enough that it’s not been possible to effectively translate the findings from the animal studies to humans.”

To get pregnant laboratory mice to express CRH, Muglia’s team decided to test evolutionary genetics and biology. They experimented with something called a retroviral long terminal repeat (LTR) known as THE1B.

Retroviral LTRs are identical sequences of DNA that continually repeat themselves and allow viruses to insert their genetic material into the genome of a host species. In the case of THE1B, it jumped into the genome of anthropoid primates (humankind’s closest evolutionary relatives) 50 million years ago.

The research team developed a hypothesis that THE1B’s invasion of the anthropoid primate genome may have initiated CRH expression in the placenta during pregnancy.

They tested this by microinjecting into transgenic mice 180 kilobytes of human DNA containing the THE1B LTR and CRH. Muglia said researchers didn’t know if it would work, but in a vivid display of genetic adaptability the mice integrated and activated the DNA in the placenta.

“We were fortunate that the mice already had the machinery waiting and ready to activate and incorporate the human DNA and CRH in their placenta during pregnancy,” he said.

After the human DNA was up and running in the mouse placentas, the researchers selectively edited DNA regions of THE1B with a precise gene-editing technique called CRISPR/Cas9. They found that the restricted deletion of THE1B silenced CRH expression and normalized birth timing in the transgenic mice.

Collectively the study’s findings suggest that retroviral insertion of THE1B into the anthropoid genome initiated CRH expression in the placenta by working with DLX3. The data also suggest that intentionally manipulating placental CRH levels can alter the timing of birth. The authors stress the current study is still early and its findings are a small part of a large and complex puzzle that requires more research.