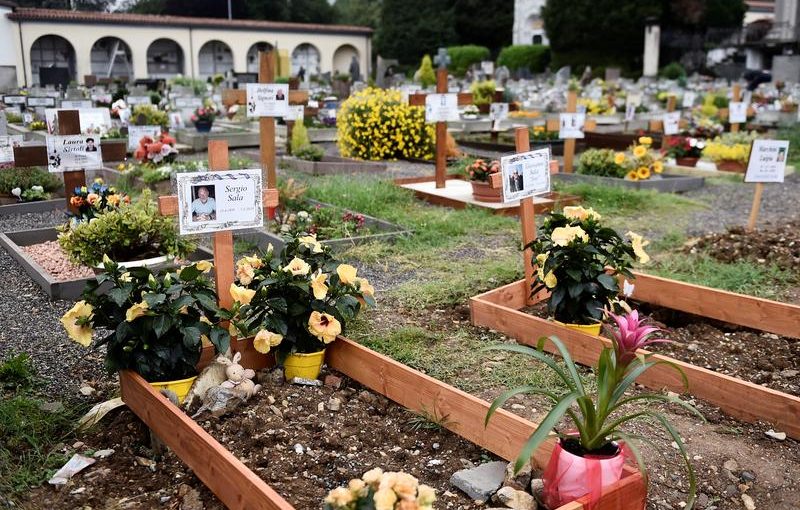 ROME (Reuters) – Italy’s coronavirus death toll passed the 100,000 mark on Monday and Prime Minister Mario Draghi warned that the situation was worsening again with a jump in hospitalisations.

FILE PHOTO: Graves of people who had recently died due to the coronavirus disease (COVID-19) are seen at the cemetery of Nembro, near Bergamo, Italy May 13, 2020. REUTERS/Flavio Lo Scalzo/File Photo

Italy is the seventh country in the world to reach the bleak milestone, following the United States, Brazil, Mexico, India, Russia and Britain.

The health ministry said 318 new deaths from the disease had been recorded in the past 24 hours bringing the total tally since the epidemic hit the country 13 months ago to 100,103. It took nine months for Italy to register its first 50,000 deaths, and just 3-1/2 months to double it.

Infections rose 23% last week by comparison with the week before and health officials have warned that the country faces a fresh surge of cases as a more contagious variant of the disease, first detected in Britain, gains ground.

Draghi acknowledged that the situation was deteriorating, but said his government was going to “significantly step up” its vaccination campaign.

“The pandemic is not yet over, but with the acceleration of the vaccine plan, a way out is not far off,” he said in his first public address since taking office last month.

Like other European Union countries, Italy’s vaccination campaign has got off to a slow start, hit in part by delivery delays from drug manufacturers.

As of Monday morning, 5.42 million shots had been carried out, with 1.65 million of Italy’s 60-million-strong population having received the recommended two doses. The government is considering switching tactics to give priority to first doses rather than stockpile second doses.

The health ministry said there had been 687 new hospital admissions over the past 24 hours, up from 443 on Sunday. The total number of intensive care patients increased by 95, to 2,700.

Italy was the first Western country to be hit by COVID-19 and went into lockdown last March to slow its advance. New cases fell sharply during the summer, but a second wave slammed the country in the autumn.

After subsiding in January, infections have been pushing up again, and authorities said on Friday that the average reproduction number had risen to 1.06 – the first time it had moved above the threshold of 1 for seven weeks. An “R” number above 1 indicates infections will grow at an exponential rate.

Data released on Friday suggested the toll might be higher still. Statistics bureau ISTAT said there were 100,525 excess deaths in Italy last year compared with the 2015-2019 average, more than the 75,891 deaths officially linked to coronavirus in 2020.