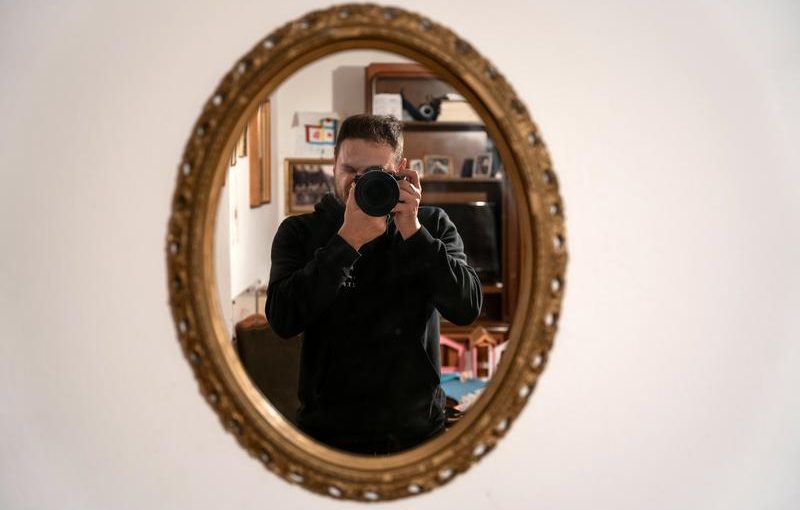 ROME (Reuters) – A year ago, Marzio Toniolo led a simple life as a primary school teacher, husband and father in the small northern Italian town of San Fiorano.

Then San Fiorano and a cluster of other towns became the first “red zone” outside China to be put under lockdown after Italy diagnosed its first case of the coronavirus on Feb. 21.

To cope with the crisis – which at one point involved four generations living in lockdown under one roof – Toniolo, 36, turned to one of his passions, photography, posting his pictures on social media.

Reuters asked him to chronicle daily life inside one of the country’s “forbidden cities”.

Toniolo documented life at home and how COVID-19 ravaged the town and its daily rhythms, as the bells tolled for yet another victim.

He has appeared on national television in Italy and his work has been seen around the world.

His favourite photo shows his three-year-old daughter Bianca painting his toe nails red. His wife Chiara Zuddas, 32, sits nearby, looking longingly out of a window.

“It recounts a completely normal moment in an extraordinarily dramatic time,” he said.

“Photography is my greatest passion. To tell a story through pictures is something that helps me be OK,” Toniolo said. “It’s almost therapeutic because many times it really cheered me up, particularly at the beginning when there was a lot of uncertainty.”

As the virus shut down other cities in Italy and Europe and then entire countries, Toniolo recalled: “I think those who followed my photographs and our story were better able to prepare themselves for the impact.”

A year later, restrictions throughout Italy have been eased but the family is going through its own second lockdown. Chiara is in quarantine for two weeks because she was in contact with someone who tested positive for COVID-19. She is isolating in a bedroom while the rest of the family lives downstairs.

They leave her food and mother and daughter pass notes and drawings under the door and talk through it.

“Everything that we are living through at the moment has a certain feeling of déjà vu,” Toniolo said. “It really feels as though we have gone back one year.”

By the time Bianca turns four in May, she will have spent nearly a quarter of her life in the COVID era.

“I can’t wait until coronavirus ends,” she told her father.