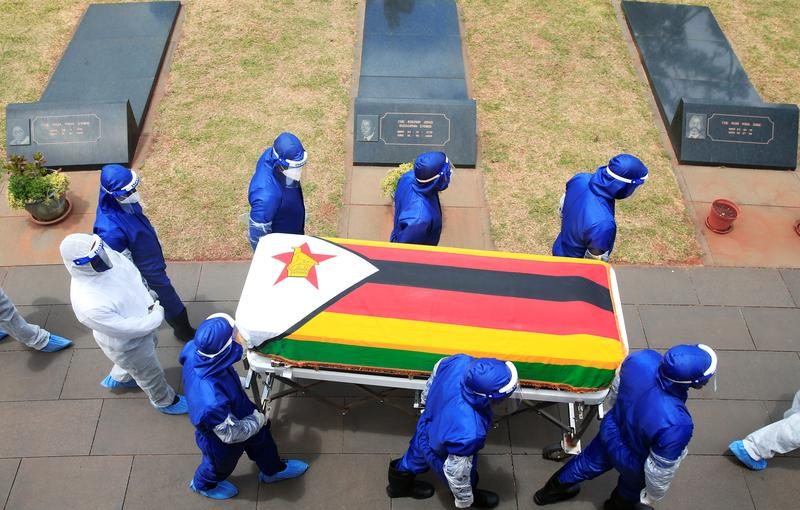 HARARE (Reuters) – When Zimbabwe’s rich and powerful get sick, they often go abroad in search of the best treatment money can buy; ousted President Robert Mugabe died in a hospital in Singapore in 2019.

Pallbearers carry a coffin at the burial of two cabinet ministers and a retired general who died after contracting the coronavirus disease (COVID-19) in Harare, Zimbabwe January 27, 2021. REUTERS/Philimon Bulawayo

With travel curtailed by the coronavirus, that luxury is not available, exposing the elite to a truth the majority has long known: Zimbabwe’s health system has been crumbling for years and is now struggling to cope with a spike in COVID-19 cases.

Anger among overwhelmed medics is adding to broader public dissatisfaction with President Emmerson Mnangagwa, who pledged an economic revival after he took over from Mugabe following a coup in 2017.

“It’s a rude awakening to the government and to the politicians,” said Norman Matara, secretary-general of the Zimbabwe Association of Doctors for Human Rights.

“If you have decades of continuously destroying your public health system, and then now you have a pandemic, you cannot then overturn that decay … in one year or in six months.”

Zimbabwe’s economy was in crisis even before the coronavirus struck, after years of hyperinflation, acute shortages of foreign exchange and power outages.

Now it must cope with a surge in the pandemic. More than half of Zimbabwe’s 32,646 confirmed COVID-19 cases and two-thirds of its 1,160 deaths were recorded in January alone, according to a Reuters tally.

Vice President Constantino Chiwenga said on Friday it was likely that more transmissible variants of COVID-19 were now circulating in Zimbabwe and the government was investigating.

He said a stricter one-month lockdown that was re-introduced on Jan. 2 and includes a dusk-to-dawn curfew and shutting land borders, would be extended by another two weeks.

Among those who have died in the last few days were two cabinet ministers, a retired general and other high-ranking officials. The two ministers were treated in a private clinic.

A government spokesman sparked uproar on social media this week when he suggested in a tweet that the deaths of ruling party officials may have been the work of “medical assassins”.

He has since apologised and deleted his tweets after health workers pointed out that they had been risking their lives for months to treat patients without adequate protective equipment, ventilators and other vital supplies.

The government says it is doing the best it can with limited resources in an economy that has been in recession since 2019.

Agnes Mahomva, the national COVID-19 taskforce coordinator, told Reuters that Zimbabwe was equipped to handle the second wave and that the government was emphasising prevention after tightening lockdown rules earlier this month.

“We expected this surge because people had relaxed. Our hospitals are adequately prepared to handle patients but we continue to say ‘mask up and stay at home’. It is the best way to beat COVID-19,” Mahomva said.

The country of 15 million people has 84 working ventilators in public hospitals, and 1,049 beds designated for COVID-19 patients in private and public institutions, according to ministry of health data.

At the state-owned Parirenyatwa Group of Hospitals, the country’s biggest COVID-19 centre with 97 beds, there are two intensive care unit beds and the hospital is nearly full, said Rashida Ferrand, an epidemiologist and physician at the hospital.

Private hospitals, which are better equipped, have less than 15% of the national bed capacity and charge at least $2,000 to admit COVID-19 patients.

Some desperate Zimbabweans have turned to social media in search of hospital beds and ventilators for ailing relatives.

The two cabinet ministers and retired army general, who all died from COVID-19, were buried on Wednesday after being declared national heroes for their role in the 1970s liberation war.

Chiwenga told a crowd of some 300 people at their joint funeral that the virus was ruthless.

“COVID-19 has taught us an important lesson, that we are all mortals. It does not discriminate between the powerful and the weak, the privileged and the deprived, the haves and the have-nots,” said Chiwenga, who wore a mask and face shield.

He is also Zimbabwe’s health minister, and has made several trips to China in the last 18 months for an unspecified illness.

“It is a ruthless juggernaut that leaves a trail of despair and desperation,” Chiwenga said, adding that vaccine rollout plans would be announced soon.

Health workers on the frontline fighting the coronavirus say they are demoralised with poor salaries and lack of protective equipment.

Enoch Dongo, president of the Zimbabwe Nurses Association, said most nurses worked shifts of up to 12 hours with no gloves, medical gowns or safety shoes and only a single surgical face mask.

“Psychologically, mentally and physically, nurses are traumatised as we speak right now, because they are watching patients die in their care (and) … some of them are avoidable deaths,” said Dongo.

“It’s a wake-up call to everyone, to politicians, to the people of Zimbabwe to the business community, that we need to invest in our health delivery system because … right now, with COVID-19, no one can travel outside the country.”