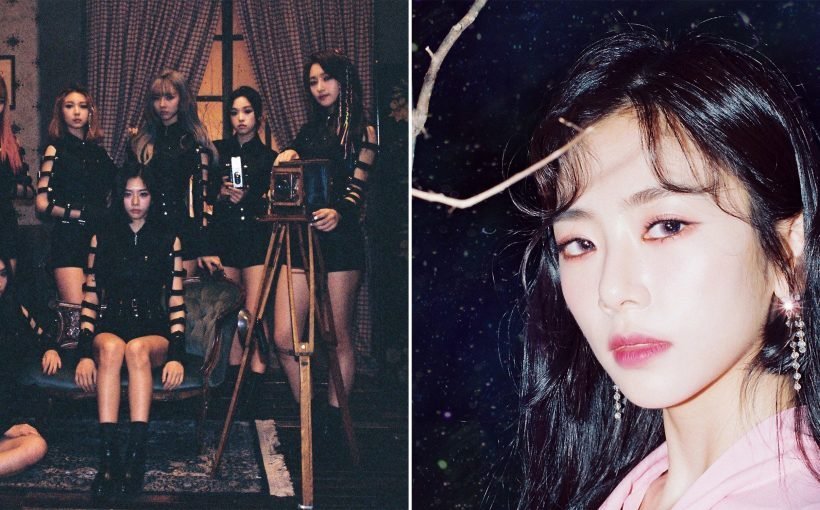 Earthquake. Siyeon uses this single word to describe Dreamcatcher, a Korean pop group she's a member of. After hearing about her favorite lipstick shade and seeing Dreamcatcher's beloved goth aesthetic in person while we're backstage at KCON LA, no further explanation is needed.

Since debuting in January 2017, Dreamcatcher has undeniably shaken up the K-pop world with its nightmare-inspired aesthetic. Not only is Dreamcatcher a girl group eschewing the usual colorful, cutesy concepts, it also makes rock music. Don't believe me? Just watch Dreamcatcher's music video for "You and I."

Although K-pop encompasses various genres beyond pop, rock and girl groups rarely go hand-in-hand. The list of K-pop's rock groups is dominated by boy bands like CNBlue, FTIsland, The Rose, and Day6. But Dreamcatcher isn't trying to be a part of the boys' club. Its members don't go on stage with instruments like the aforementioned bands and couldn't care less if boys swoon over them.

Instead, Dreamcatcher is sending seismic waves through the K-pop world by seamlessly combining polished elements of a girl group with metal ones. Their electric guitar-zinged songs are complemented by intense-yet-sleek choreography, horror movie-esque music videos, and some of the boldest beauty looks you'll see a girl group try out.

Offstage, the ladies of Dreamcatcher are less Marilyn Manson and more Marilyn Monroe, though. As cliché as that sounds, they are the epitome of sweet. In fact, the group's youngest member Gahyeon, 19, raises her hand whenever she answers questions. All were excited to share how a particular member translates the Dreamcatcher aesthetic to her daily life, their must-have beauty products, and the unexpected, French fry-related ingredient JiU looks for in skin-care products.

Whether it's holographic liner, corset braids, or violet smoky eyes, bold hair and makeup help give Dreamcatcher the mystical, ghost-like quality that Yoohyeon and JiU, respectively, says the group has.

When the group isn't performing, everyone instantly points to Siyeon as the member who is most daring with beauty in her daily life, and she graciously accepts the title with a quick bow.

Typically, K-pop stars (like Chung Ha, tell me that they rarely wear makeup in their free time because they wear so much on stage. However, Siyeon stays true to the Dreamcatcher fantasy. Whenever she can, Siyeon reaches for the darkest lip colors she can find.

"She will put on purple or black lipstick," Gahyeon explains. (She personally prefers simpler looks.) Siyeon agrees with a thumbs up before asking me if I like these shades, too. Confident in her choice of lipsticks, her question isn't about approval but focused on affirmation. Based on my bright pink eye shadow, she seems to know that my answer would be "of course" before I even say it. Like me, the 22-year-old singer is unapologetic about her bold makeup choices, calling her personal style, "giant." When I was her age, I wish I knew that I had every right to take up as much space as I want to with my look. At 26, I think I finally figured that out.

Lipstick is also a major player in Handong's beauty routine on and off stage. She calls it her must-have beauty product. Even on days where she doesn't wear makeup, she'll swipe on lipstick to pull her self-professed "classy, chic" look together. Gahyeon, on the other hand, focuses on her lashes. "I definitely need a lash curler and mascara," she says. "When my eyelashes straighten out, I immediately have to curl them.”

Yoohyeon likes to get cheeky with her makeup. Although she describes her personal style as comfortable, there's a Japanese makeup trend called Kira Kira that she's had her eye on. "People put blush and glitter on their cheeks," she explains.

Even though she excitedly mimics the application process, pointing to the tops of her cheekbones where sparkle would go, "I’ve been wanting to do that, but I haven’t been able to," Yoohyeon laments.

Because the personal styles of the Dreamcatcher members are all so different — including but not limited to JiU's refined and simple look, SuA's sexy aesthetic, and Dami's love of streetwear — they search the Internet on their own for beauty tips, Handong says.

The Skin-Care Routines of Dreamcatcher

Turns out, Dreamcatcher is as well-versed in skin-care trends as they are in makeup ones. Before sitting down with them, I believed I was, too, but the girls thought me a thing or two about Korean beauty.

First of all, SuA tells me about a mysterious pack that helps minimize pores that's popular in Seoul. After using it, "the next day, your makeup looks excellent," she swears. Sadly, she couldn't reveal exactly which product it was, but I need whatever it is ASAP.

Dreamcatcher's leader JiU also informs me of an unexpected ingredient. "I’m really into potato sheet masks," she says. "They help to soothe and brighten skin, so when it’s hot outside, a potato sheet mask is really helpful." K-beauty brands like the Face Shop, Missha, and the Saem sell them in Korea, but they aren't stocked by their U.S. e-retailers just yet. Fingers crossed Dreamcatcher will help bring potato sheet masks to America, so we can see just how radiant the product makes skin.

Ingredients-wise, Siyeon is on board with the current rise of cica products, noting that she loves moisturizers spiked with it. A couple of members agree with her in unison with Handong, noting she uses a cica balm. Specific products weren't listed off, but Innisfree's Cica Balm and Neogen's Real Cica Pads are amazing options.

Of course, Dreamcatcher is also into the standard skin-care offerings. SuA preaches the importance of sunscreen, saying it's the one step of her routine she can't skip. Yoohyeon swears by triple cleansing while Siyeon makes sure to wash her hands before doing her skin-care routine. While at KCON LA, Siyeon is the second K-pop star to mention this step to me. Momoland's Taeha is also adamant about doing so.

With Dreamcatcher dropping their third mini album Alone in the City on September 20, my fingers are crossed we'll see Siyeon with black lipstick and more hauntingly beautiful hair and makeup moments from the girl group. In the meantime, I'll try to not to lose sleep over figuring out which pore pack SuA was referring to.