Home » Beauty & Balance » Meet Fluide, the Makeup Brand That Believes in the Power of Inclusion — Not Tokenism 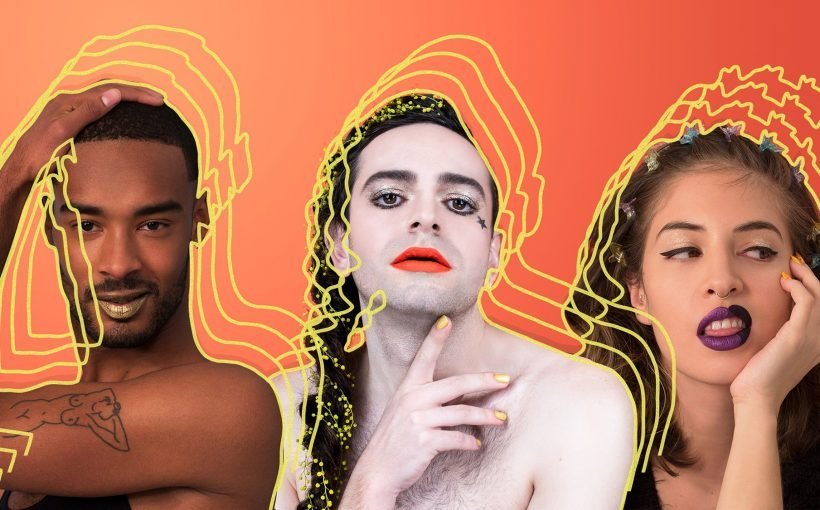 On an unseasonably cold November day last year, I walked into a photography studio in Greenpoint. As I approached, nerves began circulating throughout my body — I’d been in photoshoots before, but this would be my first shoot with a makeup brand.

As I entered Brooklyn Grain Studio, I was greeted by Isabella Giancarlo, Laura Kraber, and the faint scent of hair spray. Both of them buzzed with a tangible excitement, glitter twinkling on their cheekbones and eyelids. We walked past the photo set, where a group of Black and Brown models stood before a brightly colored backdrop. A feeling of warmth immediately washed over me, my nervousness disappearing as quickly as it came.

Giancarlo and Kraber are the founders of Fluide, a new beauty brand that describes its products as “colorful, cruelty-free makeup for all gender expressions, gender identities, and skin tones.” In November, Fluide was still a nascent idea, one that brought together a group of models, creatives, and collaborators (myself included) to bring the vision to life. Just a few short months later, Fluide had already become a reality.

In the short time since it hit the market, Fluide has been challenging many of the preconceived notions of what makeup — and the brands that create it — can, or should, be.

Genesis of a Queer Beauty Brand

The pair first were introduced after the health and wellness e-commerce company Kraber teamed up with the creative agency where Giancarlo was a strategist. Before Fluide, Giancarlo worked in design, creative strategy, and dabbled in typographic cake-making while Kraber worked in the start-up sphere and as a nutritionist. However, both dealt with sexism and undervaluation throughout their careers: “By the time we met, we had each reached our breaking point and felt inspired to create something for ourselves,” Kraber says. “We were motivated by the desire to build a company that always puts humans first.”

Originally inspired by her children's changing conversations around gender and identity, Kraber was curious about how different brands were dealing with these cultural shifts. Both Giancarlo and Kraber felt the world needed more brands that addressed the shifting landscape of gender, and the two quickly realized that beauty was a great place to start.

I was shocked there wasn't a queer beauty brand already. I thought,
'Wow, this doesn't really exist — maybe we can create it.'

“When I started looking into different types of beauty brands and alternative beauty brands, I was shocked that there wasn’t a queer beauty brand out there,” Kraber tells Allure. “I thought, 'Wow this doesn’t really exist — maybe we can create it.'”

Neither Giancarlo nor Kraber had a background in beauty, but their journey with Fluide served as a crash course. “With neither of us coming from the beauty space, we were able to approach Fluide with an open mind,” Giancarlo explains. “[We were left] open to create the beauty space we wanted to see, as opposed to being limited by what has been done before.”

Kraber adds, “When I was a kid, there was this idea that makeup was something that covered your flaws or made you look presentable — the idea that nobody is born looking ‘good enough’ and you need makeup to make you acceptable.”

To be sure, in recent years beauty brands have slowly started abandoning traditional taglines and narratives. More than ever, brands are empowering individuals to take control of their own identities and forms of expression. However, despite these advances, the beauty industry remains a homogeneous space, one that still lacks representation of the many nuanced identities of makeup-wearers around the world.

“It’s still white, heterosexual, cisgender women who are represented by [beauty] campaigns,” Kraber tells me. “We wanted to represent people who have not been represented.” For this reason, Fluide has taken it a step further in striving to center individual and communities who have traditionally not been prioritized by beauty brands — primarily Black, Indigenous, and other people of color (BIPOC), as well as queer, trans, gender nonconforming, and nonbinary people.

Giancarlo and Kraber were also adamant about creating an organic aesthetic for the brand, casting for models in online queer spaces — which is where they found me, in fact — and scouting real people on the streets and in the subways of New York City.

Valuing Representation and Engagement Over Tokenism

Zellie Cash, one of Fluide's original models who Kraber met on the C train, felt that working with Fluide gave her a sense of validation and normalcy. "I have always wanted to be a model but never thought I had the look for it. I was excited to just feel pretty like a normal girl," Cash tells Allure. "People stereotype us [trans] girls into a box and expect us to be all the same, [but] we all come in different shapes and sizes and we all have a story that has shaped us."

Fluide has also collaborated with queer activists such as Tourmaline, and recently named Jacob Tobia as the face of its newest Uncuffed lipstick line. In addition to centering queer people in its beauty campaigns, Fluide also works with queer photographers, stylists, makeup artists, and allies whenever possible, and donates five percent of all proceeds to organizations, such as the Sylvia Rivera Law Project and Callen Lorde, that work to empower the queer community.

In Fluide’s early stages, Giancarlo and Kraber crowdsourced ideas for products, shades, and product names, ensuring they received diverse opinions from within these communities, and today, all of Fluide’s nail polish and makeup shades are odes to queer spaces around the world including C’mon Everybody, House of Yes, and Secret Project Robot.

“In general, the beauty industry gives me a lot of anxiety about my gender and about my body,” Tobia tells Allure, who adds that queer and gender-nonconforming fashion is often co-opted, even as these communities remain marginalized.

“Working with Fluide felt so different because I knew, going in, that the whole point of the brand is to celebrate gender-nonconforming and queer people like me,” they continue. “The models and activists that [Fluide] works with, the queer people that they are in creative collaboration with, are such a departure from business as usual in the fashion industry.”

Working with Fluide felt different because I knew the whole point of
the brand is to celebrate gender-nonconforming and queer people like
me.

Michael Gabrielle, another one of Fluide’s models, echoes Tobia’s sentiments, also calling attention to the fact that beauty and fashion have profound impacts on a culture that regularly enacts violence on LGBTQIA+ communities.

“As a gender-nonconforming person, I have had verbal slurs and beer bottles thrown across streets, jokes, and insults made about my clothes or nail polish or eyeliner,” Gabrielle says. “Creating a brand that breaks down stereotypes around who can wear makeup and the gender tropes certain bodies are expected to perform can help to shift heteronormative narratives that engender hate and violence.”

Fluide is more than just a colorful, aesthetically intriguing brand; it is, in many ways, a remedy to a world that is — and always has been — inhospitable to women, LGBTQ+ people, and people of color, especially trans women of color. For members of these groups, beauty standards have long been merciless, but for many trans and nonbinary people, conforming to society’s aesthetic expectations often feels impossible. And, though Fluide is still a fledgling brand, it has already managed to put a few cracks in the status quo.

Creating a brand that breaks down stereotypes around who can wear makeup and the gender tropes certain bodies are expected to perform can help to shift heteronormative narratives that engender hate and violence. “[Fluide is] showing queer people express themselves queerly instead of straight people reflecting queer aesthetics,” Giancarlo says. “To see people wear our products and feel heard and seen and feel like a version of themselves that they’re happy with is the best gift we could get.”

“Makeup plays a very intimate role in people’s lives, and most people who wear makeup see it to some degree as armor — makeup [can] help us express ourselves in opposition to the cultural expectations upon us, which often have to do with race and gender,” continues Kraber. “It’s taking care of yourself and loving yourself in the face of a world that maybe doesn’t show you that you deserve that.”

Ultimately, Giancarlo and Kraber now know that Fluide empowers people with the tools to see themselves how they want to be seen. So far, the brand’s reception has surpassed what the pair originally believed was possible. “We get the most beautiful DMs [on Instagram], people [telling us] how they’ve never felt seen by a makeup brand before — hearing that is so incredibly motivating.”

I walked into the shoot and immediately thought, ‘This is it. This is
the kind of world I want to live in.’

And these feelings are certainly not isolated: To me, collaborating with Fluide has been a profound experience. It's not only provided me with a chance to revel in my own queer, mixed identity, I've also been given a glimpse into a future where queer and otherwise marginalized people are no longer afterthoughts, but priorities.

“To be in a room full of empowered queer people with all sorts of beautiful gender expressions and identities being photographed and celebrated was overwhelmingly powerful,” Gabrielle says. “I walked into the shoot and immediately thought, ‘This is it — this is the kind of world I want to live in.’”

You can shop Fluide's makeup on fluide.us, or check out the brand's blog for beauty inspiration, interviews with LGBTQIA+ folks, and more.