Home » Personal Health » TikTok User Shows How She Got a Ring Off of Her Extremely Swollen Finger in Viral Video: 'I'm Trying Very Hard Not to Panic' 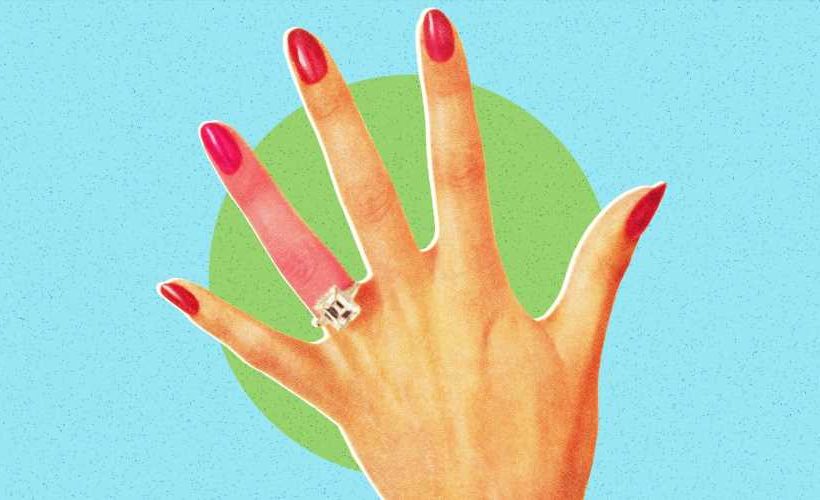 It's easy to take your ability to remove a ring off your finger for granted until you suddenly…can't. That's what happened to one woman, who went viral for a TikTok detailing her struggle.

TikTok user @quenblackwell, whose real name is Quenlin Blackwell, shared an intense video that clearly spelled out what happened when she realized she couldn't remove a ring on her pointer finger. "I'm trying very hard not to panic," she said repeatedly in the beginning of the video, as she showed the ring on her swollen finger. "I started taking videos to distract myself or I'm going to start sobbing," she said, before pointing out that her finger looked "like a carrot."

Cut to a shot of Blackwell walking to her local fire station. There, a firefighter used a special device to cut the ring open, as Blackwell breathed a sigh of relief. "I've been trying not to panic all day," she says. She exclaimed "I'm free!" as she left the fire station.

Blackwell also shared in the comments that her whole ordeal started when she woke up and her finger was "3x bigger than usual." Plenty of people sympathized. "My heart rate went up watching this," one wrote in the comments. "This video gave me so much anxiety," another said.

The video, which has been viewed more than 11 million times, raises some questions. Namely, how can a ring get stuck on your finger, and what are you supposed to do if it happens? Experts weigh in.

Why does a ring get stuck on your finger?

There are a few larger reasons why you might get a ring stuck on your finger:

How can you know if a stuck ring is an emergency?

It's never great if you're trying to get a ring off and won't budge, Dr. Adkins says. "But if swelling starts to happen…there's definitely a fair amount of urgency to that," he says.

Some sure signs that you need to seek help ASAP, per Dr. Nelson: You're in pain, your finger is swelling rapidly, or the color is draining from your finger. "As the finger swells, the ring becomes a restrictive band," he explains. "That can cut off blood supply to the finger."

And that, Dr. Adkins says, is really bad. "If you wait too long, you could be at risk of loss of function or losing the finger entirely, depending on how things go with the ring," he says.

So what should you do if you can’t get your ring off?

While there's zero shame in seeking emergency care right away, it's understandable that you might want to try some home hacks first—and there are plenty.

Rest with your hand raised

"If the hand is a little swollen and you think you can get the swelling down, you could raise your hand up and give it a little time," Kathryn Boling, MD, a primary care physician at Baltimore's Mercy Medical Center, tells Health. This allows blood and fluid to drain away from your fingers, possibly reducing swelling in the process. "You may be able to get the ring right off after a while," Dr. Boling says.

Try to lubricate the ring

The key here is to use a lubricant on the ring itself and not your entire finger, Dr. Adkins says. "You want to be cautious with how much you use," he says. "Once you get too much on there, it makes it hard to get the ring off your finger because you can have a hard time grasping it."

As for what, exactly, to use, Dr. Nelson suggests soap, petroleum jelly, or hand cream. "Usually, with enough wiggling back and forth, people can get it off," he says.

Ice can be really helpful in this situation, Dr. Adkins says. "It helps constrict the blood vessels that go toward the finger, and you'll get decreased blood flow—that can help shrink the finger," he says. "Everything gets a little more shrunken in the cold."

This is a little more indepth than it sounds. Dr. Adkins recommends slowly twisting the ring, while trying to pull some of your skin from above the ring to below it. "It can be challenging because you're trying to do this with one hand," he says. If you can recruit a friend or partner for help, have at it.

Use some dental floss

This is a little complicated, but Dr. Nelson says it "works pretty well." To try the hack, slip a piece of fine string or dental floss under your ring. Tightly wrap the string around your finger, up past the knuckle. Then, unwrap the string from the bottom part that's under the ring. The ring should move up and over the string as you unwrap. "Be careful not to leave it on too long," Dr. Adkins says. "Otherwise, you can cut off blood supply to the rest of your finger."

If you've tried all that and the ring still isn't budging, Dr. Boling says you can either go to your local fire station or emergency room. "A lot of times they'll have an instrument that can cut the ring off," she says. Just call ahead to be sure they're equipped to handle your situation, so you don't waste a trip, Dr. Adkins says.

If your ring is sentimental, all is not lost. "In most cases, we can save the ring," Dr. Nelson says. "Then, a jeweler can fix it for you."