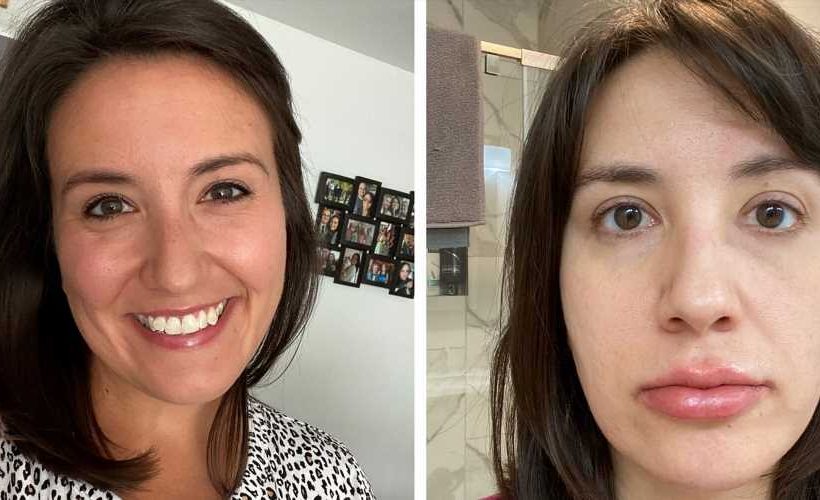 While Battaglia said that her lips seemed to be getting better on Wednesday, they got worse the next day. "By Thursday evening, I was starting to feel a tingling sensation on my lips and I noticed they were starting to swell again," she says, adding that she was getting nervous at that point. "It definitely didn't make sense that this would carry on for so many days and would actually get worse," she says.

Battaglia says it was her mom who first suggested that maybe she was having a reaction to the COVID-19 vaccine. "I was skeptical, since it had been about three weeks since the second dose," she says. But, after doing some reading on the vaccine, she learned that lip swelling can happen—even a few weeks after having the vaccine.

Lip swelling has been linked to the Moderna vaccine, especially in people who have had lip fillers. But Battaglia doesn't have lip fillers and she had the Pfizer, not Moderna, vaccine.

Battaglia says that her lips "definitely hurt a little…they felt very raw and itchy, mostly around the outer edge." They even started to feel numb. "I recall trying to drink out of my coffee mug that morning and coffee kept dribbling down the side as my lips weren't able to form a full seal," she says. "It was very uncomfortable; it felt as if they were being blown up like a balloon."

On Friday—five days after she first had lip swelling—Battaglia went back to the doctor, who put her on a prescription steroid medication, along with a topical steroid. She was asked to follow up with a dermatologist.

"I started to see improvement that same day, but it did take a few days for my lips to return to their normal size," she says. Battaglia also noticed that she had "constant dryness" on her mouth and that her lips even looked gray-ish. "It looked like they had deflated and were wrinkled and dry," she says.

Battaglia saw a dermatologist a few days later. "She was the first to say she was pretty confident it was a delayed reaction to the vaccine, as it's something she's seen a number of times before with other vaccines," Battaglia says. Her doctor recommended that she apply Vaseline or Aquaphor to keep her lips hydrated, and keep up with the steroid medications. "Basically, since the skin on my lips stretched out so quickly and then returned to normal size, they were dried out and just needed some time to fully return to normal," she says.

It's only natural to have some questions after hearing about Battaglia's experience. Here's what you need to know.

Can lip swelling happen with the COVID-19 vaccine?

A report issued by the Food and Drug Administration in December detailed how two people out of 30,000 enrolled in the Moderna COVID-19 vaccine trial had swelling within two days of receiving the second dose of their vaccine. While the report notes that "both subjects had prior dermal filler" (aka lip fillers), there were no more details. And currently, the CDC does not warn about the risk of swollen lips with either the Moderna or Pfizer-BioNTech vaccine.

But, experts say that lip swelling can happen with the COVID-19 vaccine—and really, any vaccine in general. "Lip swelling, or angioedema, can occur with almost any vaccine," Amiinah Kung, MD, an allergist at Northwestern Medicine Central DuPage Hospital, tells Health. The side effect can be "scary," she says, because "it can be associated with anaphylaxis, a serious allergic reaction that can lead to shock or even death." Lip swelling on its own, though, is relatively harmless, Dr. Kung says. It's just uncomfortable.

As for why this kind of reaction can happen, that's less clear. "It could be a minor allergic reaction," infectious disease expert Amesh A. Adalja, MD, senior scholar at the Johns Hopkins Center for Health Security, tells Health. And even though the vaccine is injected in your arm, it enters your body's bloodstream and prompts an immune system response, Purvi Parikh, MD, an allergist/immunologist with Allergy & Asthma Network, tells Health. Because of this, "swelling can occur anywhere," she says.

Richard Watkins, MD, an infectious disease physician and professor of internal medicine at the Northeast Ohio Medical University, agrees, telling Health that, "any person can have an idiosyncratic reaction to the vaccine."

Still, while lip swelling from vaccines can happen, it's hard to be entirely sure that Battaglia's swollen lips were a direct result from her COVID-19 vaccine. "This lip swelling may have been from something else altogether," Dr. Parikh says.

If you happen to develop lip swelling after getting vaccinated, Dr. Kung recommends calling your doctor. And, if it happens within four hours of getting the vaccine, you may need emergency treatment—that means you should take a trip to the ER.

"If the reaction occurs 24 hours later, this is considered a delayed reaction, which may or may not be allergic in nature," she says. If this happens after your first dose of the vaccine, Dr. Kung says it's a good idea to talk to an allergist to see if you should still receive the second dose as planned, along with any precautions you should take.

Weeks later, Battaglia says her lips are "completely back to normal." Despite her intense experience, Battaglia says she doesn't want other people to be nervous about getting the vaccine.

"Once I learned this reaction can happen with any vaccine, it was even less concerning to me," she says. "I think it's important that we do all we can to reach herd immunity and return to some type of normalcy."

The information in this story is accurate as of press time. However, as the situation surrounding COVID-19 continues to evolve, it's possible that some data have changed since publication. While Health is trying to keep our stories as up-to-date as possible, we also encourage readers to stay informed on news and recommendations for their own communities by using the CDC, WHO, and their local public health department as resources.