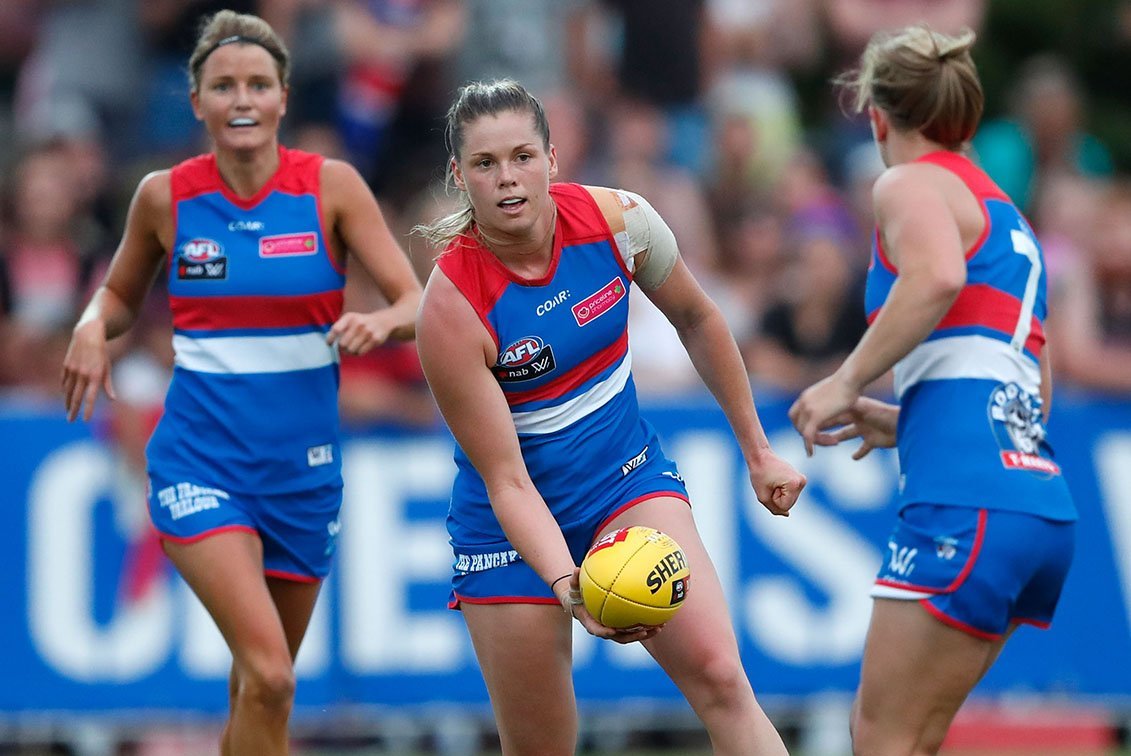 Big news: The first-ever national women’s league has just kicked off! And it’s a game-changer. Here’s why…

Right now is a thrilling time for women’s sport. While there have been state-based female footy leagues for a few decades, eight AFL clubs have just formed a national women’s league, known as AFL Women’s.

And, in short, it’s a history-making moment. “Here is an opportunity for women to get behind female athletes in a new, exciting competition and show the community that women’s elite sport matters,” says Jennie Loughnan, ground operations manager for the AFL and AFLW.

Get behind it by heading to a match (mostly free!) or tuning in during February and March. Every match will be televised live on Channel 7, FOX FOOTY, the AFL Live Official App and AFL.com.au. Meet your game-day prep, plus some of the hottest players!

Don’t have the foggiest about Aussie Rules? Here’s a snapshot of the game, thanks to Loughnan.

In AFL Women’s games, there will be 32 players (16 per team) on the field at any one time (in the men’s comp there are 18 players per side). “The object of the game is to score the most points over four 20-minute quarters,” says Loughnan.

Players score points by kicking the football through the opposing team’s posts at one end of the field – an oval, since games are normally played on cricket grounds.

If the ball is kicked through the two middle posts (goal posts), they score six points (a major).

If it goes between a goal post and one of the two outer posts (known as behind posts), then they score one point.

To get the ball towards the posts, players kick, handball (punch the ball from their hand with their other fist – you can’t throw it) or run while holding the ball. While running with the ball, they need to perform a running bounce at least every 15m, otherwise the other team gets a free kick from the point where the ball holder ran too far.

When it comes to tackling: “It’s permitted below the shoulders,” says Loughnan. When someone is tackled, they must dispose of the ball by either kicking it or hand balling it away. Simple.

Why you should join a team

About 27 per cent of AFL’s participation base is now female, says Loughnan. There are more female-only clubs than ever, and more opportunities for players of all skill levels, including zero skills! “That’s what training’s for, to help people improve!” The really great thing about AFL: “Everyone’s welcome to play regardless of size or ability.”

There’s less risk of getting crushed by an Incredible Hulker like you might in the usually rougher rugby codes.

Join a team to make friends and get a great workout. “Cardio, from the running, plus you’ll develop your strength, agility and obviously your ball skills,” explains Loughnan.

To find a local club, visit their site at play.afl

AFL has some really speccy language.

In short, a shocker. Most typically, this will be either conceding a free kick or kicking or handpassing the ball directly to an opponent. Oops.

Out on the full

A kick that travels across the boundary line without a player or the ground touching it. Results in a free kick to the opposition, by the player closest to where the ball crossed the line.

The act of a field umpire putting the ball into play by throwing it up in the air. A ball up occurs at the start of each quarter, after a goal or to restart in the field of play.

A clean catch after another player kicks the ball at least 15m without it touching the ground or anyone else. (Also the spot where the mark or free kick occurred.) A spectacular mark (a ‘speccy’) is when a player leaps onto another’s back to take a high mark. The player climbed on is a ‘stepladder’.

When the kicked ball hits a goal post, that’s one point.

When a player holds the ball to the side in one hand, then runs the other way. Tricky. WH

It’s free! The public can enjoy free access to all NAB AFL Women’s competition matches with the exception of five double headers they will play as curtain raisers for the men’s games. For those men’s matches you’ll need to buy a ticket from Ticketek or Ticketmaster.

For more on AFL for women, grab a copy of this month’s Women’s Health.