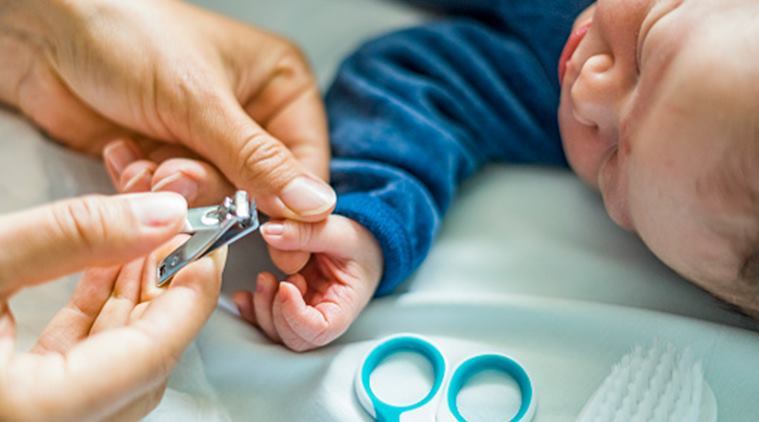 Keeping babies' nails trimmed is imperative for preventing them from scratching themselves or others. If they are not trimmed, they might end up hurting themselves even while relieving an itch. Ever wondered why health care professionals around you ask you to focus on nail hygiene or trim your child’s nail from time to time? The reason is simple. Long and unkempt nails can potentially cause a number of health problems like infections (such as pinworms), injuries, internal diseases, nail fungus and structural problems like ingrown toe-nails.

Long and dirty nails harbour more dirt and bacteria and can result in serious infections. Studies have indicated that the bacteria that causes diarrhoea and vomiting, which is very common with children, often resides under the finger nails. Children are often seen putting their fingers in the mouth for comfort. If unclean, the germs can easily pass and result in infection. Well-trimmed nails can also prevent children from biting or chewing their nails hence, the issue will be nipped in the bud.

Keeping babies’ nails trimmed is imperative for preventing them from scratching themselves or others. If they are not trimmed, they might end up hurting themselves even while relieving an itch. Kids often scratch their nose, and if they have long sharp nails they might cause an injury in their nostrils which can also result in nose bleed.

A baby’s skin is very delicate and sensitive and if their or even the mother’s nails are long, it can accidentally hurt the infant. Along with children, their caregivers especially mothers should also take adequate care of their nail hygiene as they are the ones usually handling foods items or changing dirty nappies, while potentially sheltering germs in the nail bed.

It is crucial to keep yours and the child’s nails clean and properly trimmed. Washing hands merely with soap is not the perfect way to maintain nail hygiene. One should take five seconds and clean underneath the nail to get rid of the unwanted germs. A soft nail brush can be used to clear out the dirt and germs that accumulate under the tips. It is advisable to trim nails after a bath, when they are softer and trimming is easier. It is essential to dry the hands including the nails with a clean towel to avert any fungal infection to develop. The next step is to apply moisturiser so that the nails are soft. Moist nails are brittle and break easily. It is also recommended not to cut the cuticles as they act as a barrier to prevent nail infections.

During pregnancy, with an influx of pregnancy hormones and intake of multivitamins, the nails grows at a faster rate than usual but the flip side is that they might become thin and brittle, which can result in injury if the nail gets caught up in something. If uncleaned, this can result in infections which might affect the overall health of the mother and foetus. During this time, there is a lot of itching on the abdomen due to stretching of skin and long nails can actually cause some injury in that case. Frequent exposure to chemicals in nailpaints and acetone, which is present in nail paint remover, can also have a toxic effect on the nervous system of the mother. However, there is not much evidence to show the direct effect of these chemicals on the foetus.

Nail infections are usually characterised by swelling of surrounding skin and pain in that area or thickening of the nails. It is suggested to consult your doctor before taking any self-medication or resorting to home remedies. Nails hold more importance then just adding beauty, therefore, nail hygiene is equally important as hand hygiene to keep diseases at a bay.