Home » Kids Health » The story of Diwali: The homecoming to Ayodhya 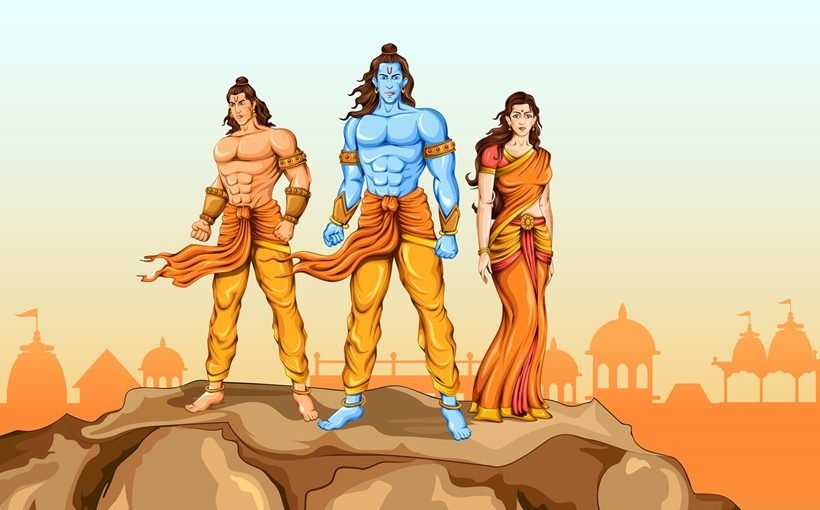 Read this Diwali story with your kids as you prepare for the festivities.

(The Homecoming by Swapna Dutta, excerpted with permission of Hachette India from Celebrate Your Fun Festival Handbook—Diwali)

Sita sat on the shore gazing thoughtfully at the turbulent sea stretched before her. It was a gorgeous span of sapphire-blue melting into the azure sky far beyond. Even a year ago she would have revelled in its wild beauty and thought it wonderful. But a lot had happened during the time, turning her whole world upside down. Although things had been sorted out since then, to Sita, the sea continued to remain a bitter symbol of her misfortune.

It was the sea that had separated her from her husband Rama causing her months of agony. It was this lonely seashore that she had selected for immolating herself when Rama had doubted her loyalty. Had Agnideva, the God of Fire, not picked her up and placed her before her husband, unhurt and untouched by the flames, and vouched for her purity and steadfastness, her ashes would be resting in the sea right now.

Sita shuddered and covered her face. She could hardly bring herself to believe that she was now facing a new chapter in her life that promised unmixed joy and happiness. Tomorrow she would be home. She would be back in Ayodhya, a place she not seen for 14 long years.

As a huge wave broke at her feet splashing her with its salty spray, Sita’s thoughts returned to the past once more.

However incredible that might be, she had faced both that afternoon. Her thoughts wandered back a few hours when she had sat dejected in the Ashokavana lamenting her fate, wondering what was happening at the great battle outside, in the heart of Lanka.

Would Rama and Lakshmana be able to overthrow and vanquish the ten-headed monster who had abducted her and defeat his huge army of rakshasas? Or would they get hurt instead? They could easily face defeat not because they lacked bravery or competence, but because Ravana had special boons that made him virtually invincible.

Rama and Lakshmana also lacked the enormous army that Ravana had.

Suddenly, Sita heard a huge uproar like the breaking of a dam. Had the worst happened? As her heart sank and her tears flowed afresh she heard a voice calling her. It was Sarama, Vibhishana’s wife who had befriended her so tenderly all this time. She was her only friend and support in this enemy island.

‘Sita, Sita! Don’t cry any more,’ Sarama cried in a jubilant voice, ‘Your days of sorrow are over and done with. Rama has vanquished Ravana and conquered Lanka.’

Sita looked up, unable to take it all in. ‘Is it really true?’ she asked in a shaky voice, ‘I am so afraid of believing anything good, Sarama. I’ll merely wake up to find that I’ve been dreaming.’

‘Not this time,’ said Sarama, ‘what I’ve said is really true.’

‘Bless you,’ she had said smiling through her tears, ‘Can I really see Rama again?’

‘Of course you can, foolish girl. He is waiting for you on the seashore as the rest of the land is covered in blood and overflowing with dead rakshasas and monkeys,’ said Sarama, ‘I have come to take you to him.’

Sita had stood up, her eyes shining. ‘I’m ready. Let’s not waste any time. If you could only guess how eager I am to see him!’

‘Well, I can guess,’ said Sarama smiling, ‘but I can’t possibly let you go to him like this!’

‘Just look at yourself—your uncombed, tangled hair, your crushed and crumpled clothes, your dry and chapped arms, your cheeks grimy with dried tears!’ cried Sarama, ‘Do you think I am going to let him see you like this when he hasn’t set his eyes on you for months? Not likely!’

‘He won’t mind,’ said Sita smiling. ‘It will only show him how badly I have missed him and that I had no thoughts to waste on myself. Please don’t delay, Sarama dear. I am dying to see him and Lakshmana once again.’

But Sarama was firm. And Sita was compelled to give in and wait patiently until Sarama had dressed her in regal clothes, polished her arms and face with fragrant sandalwood oil, combed out her long tresses and tied it beautifully with a crown of flowers. Then she adorned Sita with her own expensive jewellery as befitting a queen. ‘You look exquisite!’ cried Sarama, ‘I’ll take you to him now.’

They made for the seashore with eager steps as Sita wondered happily what Ram would say when he saw her. Were her days of sorrow really ended for good? Could she really look forward to happiness at long last? Ah there he was, her beloved Rama who had avenged the villainy of Ravana at last! And there stood the faithful Lakshmana, a little further away. Sita couldn’t wait to face him! Sarama had already turned back.

They stood face to face at last after an eternity of separation. Sita looked up and got a rude shock. Rama was looking at her with frank surprise and disapproval. Where was the delight of having found her once again? Rama’s eyes seemed to reproach her, saying, ‘Did you really miss me? It doesn’t seem so! All these grand clothes and jewellery…it doesn’t seem as though my absence has mattered to you one way or the other!’

Had it been a mistake to let Sarama dress her up like a queen? Had he seen her as she had remained all these months, he couldn’t possibly have misunderstood her or doubted her anguish! Her grief-stricken face, her bare arms and neck (she had refused to wear any jewellery offered by Ravana) and ragged clothes would have made it obvious that clothes and jewellery were of no importance to her.

But couldn’t Rama look beyond her outward appearance and read her heart in her eyes?

Rama had looked away as though he found it difficult to find words to address her. Sita waited, looking at him eagerly.

‘Sita,’ he said at last, ‘It was my duty as your husband and the king to punish the demon who abducted you. I have done it. I have killed Ravana.’

He stopped, as if wondering what to say next. Sita continued to look at him, unable to guess what he would decide to do. ‘You have been here all these months …’ said Rama after a pause. ‘You don’t look as though it was too tough a time for you. And I can’t be sure that … you still feel for me as you once did. So much has happened since then!

Anyway, you are free now, free to live as you choose. I feel this is where we should bid adieu to each other.’

Sita looked at Rama in stunned disbelief. Could it really be her husband speaking to her? Was this the same Rama to whom she meant the world? Was he seriously doubting her love and loyalty after all these years? True, he had not said anything harsh—that was something he could never do—but did he not realize that he was breaking her heart?

Sita stood still for a moment. Then she walked up to Lakshmana who looked livid after hearing Rama’s words.

‘Lakshmana,’ she said looking up to him, ‘I have no wish to live any more. Please prepare my funeral pyre on the sands.’

Lakshmana could not trust himself to speak. He believed in plain speaking and sounding out his mind on all occasions. And he felt that Sita was justified in making such a request after hearing what Rama had to say. He moved about silently building a funeral pyre and set it alight. Sita walked up and jumped into the roaring flames.

And then the miracle happened! Sita was amazed to find that the fire did not burn her. It did not even feel hot! Then she realized that she was being clasped by a white-haired sage who was no other than Agnideva, the God of Fire. He lifted her tenderly and placed her in front of an astounded Rama and Lakshmana. ‘Rama, Sita is purity personified and you have no cause to doubt her. She has never wavered in her love or loyalty for you. Accept her, take her back home and be happy.’

Agnideva placed Sita’s hand in Rama’s. Sita looked up and saw the love—that had always been there for her—in his eyes, shining as before. Everything else had vanished like the mist before the sunlight. At last she was ecstatically happy!

All that had happened just a few hours ago! Rama and Lakshmana were busy making arrangements for their return leaving Sita on the seashore. Vibhishana who was now king of Lanka had offered Rama the Pushpaka Ratha that had belonged to Ravana. It would make their journey much shorter, and they would be in Ayodhya the very next evening, by sundown.

Lakshmana sought out Hanuman. ‘Hanuman, the people of Ayodhya ought to know that their king and queen will be home tomorrow. They will be bitterly disappointed if we don’t give them time to prepare for the homecoming.’

‘I’ll go there at once,’ said Hanuman, ‘I’ll be there long before tomorrow evening.’

‘Go to Bharata first and tell him. He will do the needful.’

And Lakshmana told Hanuman where to find Bharata.

Hanuman lost no time and had no problem locating Bharata who was also dressed like a tapaswi, just as Rama and Lakshmana had dressed during their years of exile.

Looking at the austere set-up around him, Hanuman could plainly see that Bharata loved his brothers very much and had been living on fruits and edible roots while he ruled the kingdom as Rama’s representative.

Bharata was dizzy with delight when he heard that Rama’s period of exile was actually over and that Rama, Lakshmana and Sita would be home the next day. ‘I must tell the inhabitants of Ayodhya at once! They must have time to prepare for the grand welcome ceremony.’

Joy is a great incentive and before long the whole of Ayodhya was decked up and gleaming. There were flowers everywhere. ‘They will arrive at sundown,’ said Bharata, ‘We must have lights everywhere to welcome them. Lights and more lights!’

When the exiled king and queen stepped out of the Pushpaka Ratha at dusk the next evening the whole of Ayodhya was gleaming with lights. Every nook and corner was lit up with lamps and lamps galore!

‘Deepavali!’ said Ram, his heart overflowing with bliss and contentment.

And that was the first Diwali.

Indians everywhere have been celebrating Diwali ever since, to commemorate Rama and Sita’s homecoming after 14 years of exile.