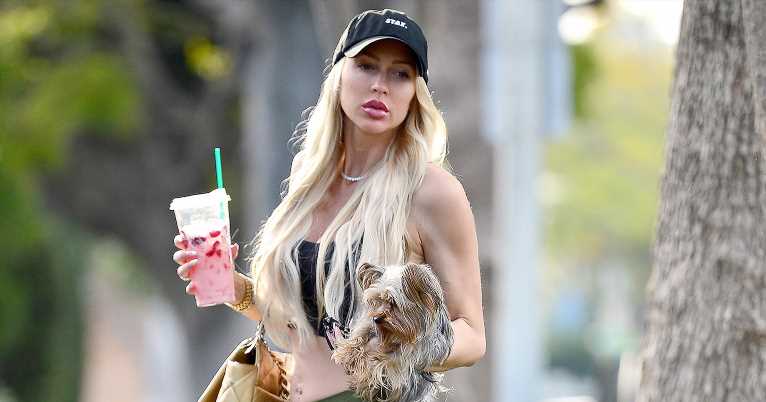 Bun in the oven! Pregnant Christine Quinn has been giving glimpses of her baby bump since her February pregnancy announcement.

“Christine is so excited to be a mother and her friends are so excited for her,” a source exclusively told Us Weekly at the time.

The Selling Sunset star, 31, put her budding belly on display for the first time following the news. The mom-to-be held her dog in one hand and a drink in the other while exiting her car in West Hollywood. She showed her stomach in a sports bra and matching leggings.

The Texas native has gone on to show more of her pregnancy progress via Instagram, from yoga sessions in February to TikTok challenges the following month.

The reality star’s pregnancy news came one year after her and Christian Richard’s wedding. After their secret December 2019 nuptials, Quinn told Metro that she “absolutely love[s] kids.”

The real estate agent gushed in August 2020: “I want two. I would love two boys. I can’t even imagine, like, trying to tame a little Christine. I always wanted two little boys just because I’m actually quite a tomboy myself. Obviously we want to travel first, but then after that we’d love to start a family.”

Quinn’s costar Heather Rae Young hopes that becoming a mom will “soften” the former actress. “From other girls I know in the past, it has softened them,” the California native, 33, exclusively told Us in February. Despite their ups and downs, Young reached out to congratulate Quinn. “We had a great little catch-up with each other,” she explained at the time.

As for Amanza Smith, the interior designer exclusively told Us that Quinn has a “motherly side.”

The Indiana native, 44, who is the mother of daughter Noah and son Baker, explained, “I feel like people are going to be surprised. She’s a very domestic person. She’s from Texas, she likes to ride horses and bake pies. I think she’s going to be great. … If one of my friends is having a baby, I feel like I’m having a baby because I’m obsessed with kids. I’m like, ‘I know that you can afford, like, 800 nannies and you have a family and it, but can I please come over and like swaddle the baby and hug the baby and I’ll teach you how to breast-feed and all that?’”