Home » Kids Health » How to Co-sleep With Your Baby Safely 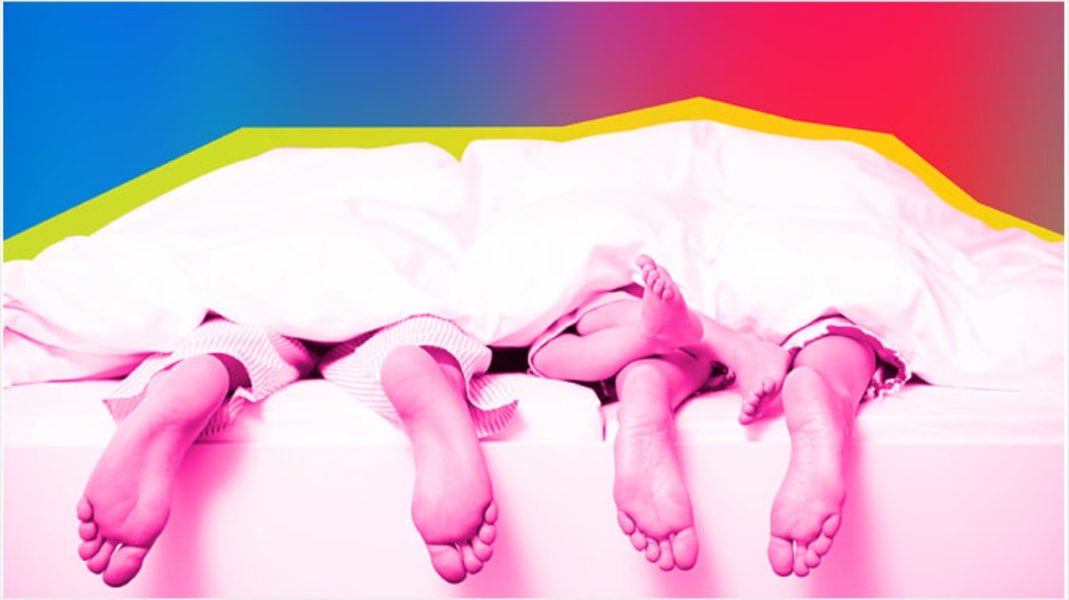 From the time my baby was born, he did not like sleeping on his own. We’d place him in the bassinet or his little swing after falling asleep, and he would immediately wake up and scream. He went from newborn naps in our arms to older baby naps in our arms to nighttime co-sleeping. No matter how much we tried to put him back in his crib, he wouldn’t sleep more than the first part of the night before refusing to sleep anywhere but with us. So we opted to follow our baby’s cues and have defaulted to co-sleeping, which makes all three of us feel secure and loved. Despite the inconvenience (and loss of sleep) from co-sleeping with the baby, it feels like it’s the right thing to do for our family — and the thing that our son needs and demands.

Co-sleeping with your baby has real benefits, but it’s crucial that you do it safely.

More: My Baby Doesn’t Sleep, & It’s All My Fault

Co-sleeping has been popular throughout history and remains the default bedtime arrangement for parents and babies in many cultures today; it’s mainly modern Western culture that has promoted babies sleeping in cribs apart from their parents. Still, the practice is making a comeback and is on the rise in the U.S., nearly doubling between the ’90s and today, according to a Yale University study published in JAMA, with close to 25 percent of parents saying they co-sleep with their babies.

But what about SIDS (sudden infant death syndrome), a somewhat vague umbrella term that encompasses some known and other unknown causes of death in infants, mainly under the age of 6 months, largely due to suffocation? An American Academy of Pediatrics study from 2016 shows that the rate of SIDS has actually declined slightly in recent years, while the rate of accidental suffocation from bed-sharing is slightly up — likely in concert with the increase in co-sleeping.

But sleeping in the same bed as your baby doesn’t have to risky.

In fact, some, like Leigh Anne O’Connor, a board-certified lactation consultant, argue co-sleeping actually decreases the likelihood of SIDS if you are breastfeeding. "The baby and their breastfeeding parent attune to each other in a specific way when they are breastfeeding. The baby picks up the breathing pattern of their parent," O’Connor tells SheKnows.

More: My Baby Is Ruining My Marriage

So, how can you make sure your baby is as safe as possible when co-sleeping with you? Read on for tips from co-sleep experts O’Connor and Dr. James J. McKenna, director of the Mother-Baby Behavioral Sleep Laboratory at the University of Notre Dame.

The first and foremost thing you can do to create a safe bed for baby to share with you is to remove all excess linens and blankets and pillows. Ideally, you’d have just a flat bed that isn’t too soft (and no water beds). If you need to use a blanket, use one that is very light and less likely to be a suffocation hazard. If you do use a pillow, try to pull it all the way over and use just the corner so that baby’s head couldn’t slip underneath it.

In addition to what’s on the bed, equally important is what’s near the bed. Namely, make sure the bed isn’t up against a surface your baby could suffocate on. Ideally, the bed would be away from all walls and surfaces and the mattress would be positioned on the bed so it wouldn’t slip. And the bigger the bed, the better. A king-size bed means more room for everyone (and less chances of someone rolling over onto Baby or Baby rolling off the bed).

Part of making sure you don’t need heavy blankets or any blankets is ensuring that everyone, not just the baby, is dressed warmly enough. Opt for long sleeves and pants for yourself and a sleep sack for baby so you don’t have to worry about anyone getting cold in the night. Keep the temperature lower at night — ideally in the high 60s — which helps everyone sleep better and prevents overheating. Also, if you have long hair, be sure to tie it up; strangely enough, there’s a risk of the baby getting entangled in your hair.

More: The No. 1 Way to Survive Being a New Parent

Keep yourself in check

There are a good number of preventable deaths from co-sleeping caused by parents who were drinking and/or smoking. Do not sleep with your baby after drinking — even one glass of wine can impair your senses and increase the likelihood you could hurt baby. The same holds true for smoking or if you take medication that could make you drowsy.

Maybe you don’t want Baby in a crib in another room, but you’re too worried about sleeping in the same bed. There are options like bassinets that attach to the bed and even ones that go in the bed so the baby feels close but there’s a protective layer separating you. This could serve as a happy medium if you are too concerned about the risks of co-sleeping.

"Bed-sharing is functionally and biologically entwined with our cultural seismic shift to breastfeeding, leading to the most safe bed-sharing of all, breast-sleeping, will make this committee utterly defunct and outside the mainstream of our parents nighttime lives with their babies," McKenna tells SheKnows.

Co-sleeping is not without its challenges, but many believe the benefits outweigh the risks. Just be sure to follow these guidelines and do everything in your power to ensure that your little one has a safe slumber.