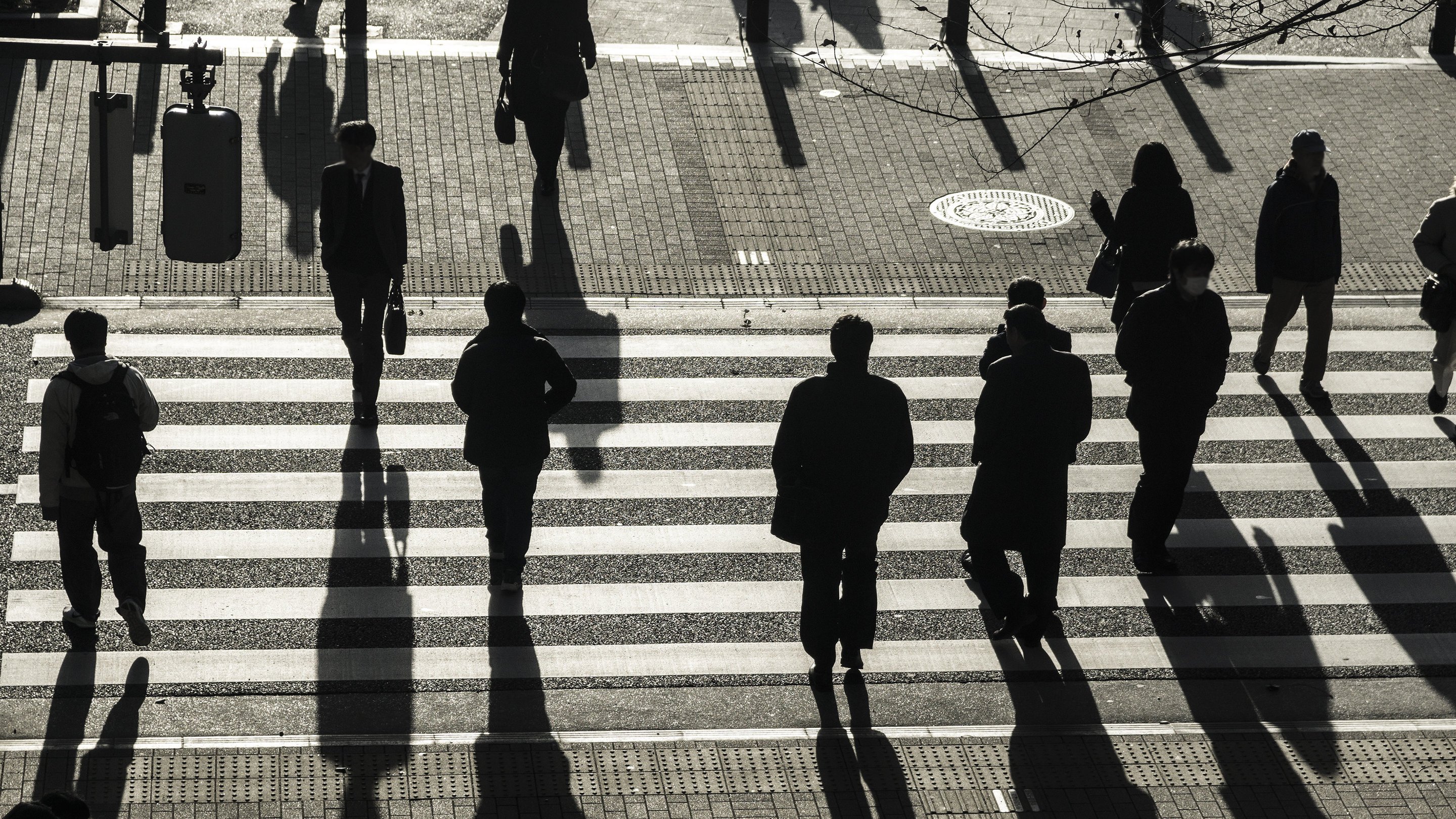 Successive Australian governments have increased their spending on mental health over the last few decades, which is a good thing. But when the rate of mental illness isn’t going down, we need to step back and ask why.

Our research shows there is unfairness in how Australia’s mental health care is delivered. Improving mental health will depend at least in part on fairer distribution. While this means increasing spending in regional and remote Australia, it also means getting more resources to poorer urban areas.

Higher spending, but no effects

Major funding streams into mental health care come from state and territory governments (60%), the Australian government (35%) and private health insurance funds (5%). The rising blue line in the below graph represents this total dollar spend, which has been increasing. Today it is around A$150 more per person than in 1999-2000.

We might hope the proportion of the population with active mental health problems would be going down with the increase in spending. But the bottom red line shows this isn’t the case. This line represents the rate of the population with higher levels of psychological distress, as quantified by the Kessler 10.

The Kessler 10 (K10) is a questionnaire answered by around 20,000 Australians in national surveys every three years. It asks about depressive and anxiety symptoms in the last 30 days. Your GP might have asked you to fill out this questionnaire if mental health has been discussed. 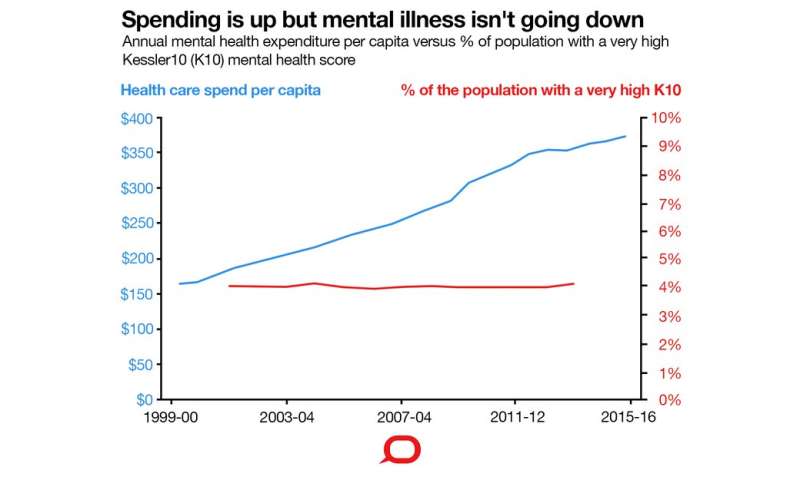 People with increased scores are likely to have clinical anxiety or depressive problems, so the rate of very high K10 (30 or more) is a useful measure of mental illness in the population.

The slug-like creep of an essentially flat (red) line shows that the percentage of Australians with very high K10 scores has stayed steady at a bit over 4% since 1999-2000.

Funding isn’t getting to the right people

So why is increased spending not affecting the very high K10 rate? Perhaps it needs to reach some higher dollar threshold to make a difference. Maybe other cultural changes are pushing up the underlying rate, or money needs to be spent differently – perhaps more on, say, effective prevention.

However, we suggest a major reason is that the increased spending is not getting care to people in the areas that need it most.

Medicare data reveal something of how this is happening. The left axis of the second graph has a blue line showing the annual use for each 100 people of Medicare item 80010 – a session of about an hour with a clinical psychologist – over four years, across various regions. Once you leave the major urban areas, this rate just about falls off a cliff. 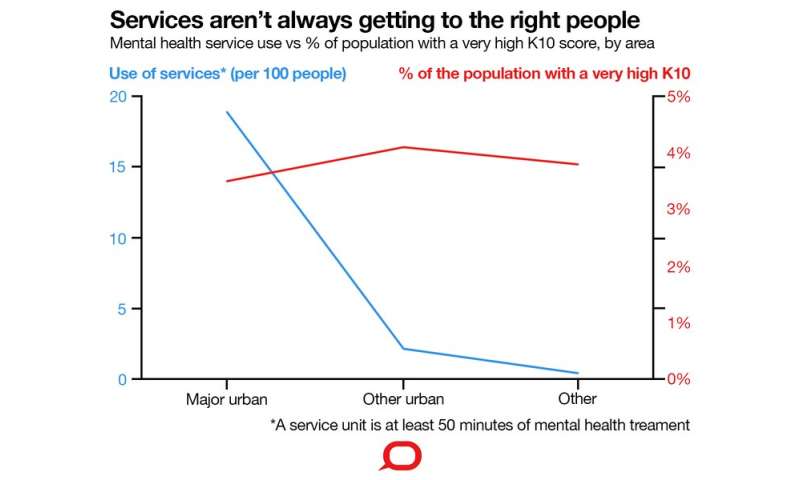 It’s important to note the rate of very high K10 (represented by the red line) isn’t appreciably higher outside the big cities. While there will be specific remote areas with higher rates, overall living in regional and remote Australia doesn’t seem to mean you’re more likely to have clinical anxiety or depression.

But, as the graph shows, you are much less likely to get to consult with a clinical psychologist to help you with the condition if you live in a regional or remote area.

Another big problem is socioeconomic disadvantage. This is measured with the Index of Relative Socioeconomic Disadvantage (IRSD), which the next graph groups into five bands: from most deprived (poorest, left) to least (richest, right).

The left axis and blue line show how people living in deprived areas – and there’s a lot of them, mostly in cities – are much less likely to be seeing clinical psychologists. On the right axis and the red line we see the rate of very high K10 scores getting higher with more disadvantage.

The X shape of the graph shows that, paradoxically, as the rate of disorders goes down in better-off areas, the rate of use of these mental health services goes up. Use of these services may be as much as nine times less proportionally to the number of people with mental health problems in the worst-off areas, compared with people in the best-off fifth of the country. 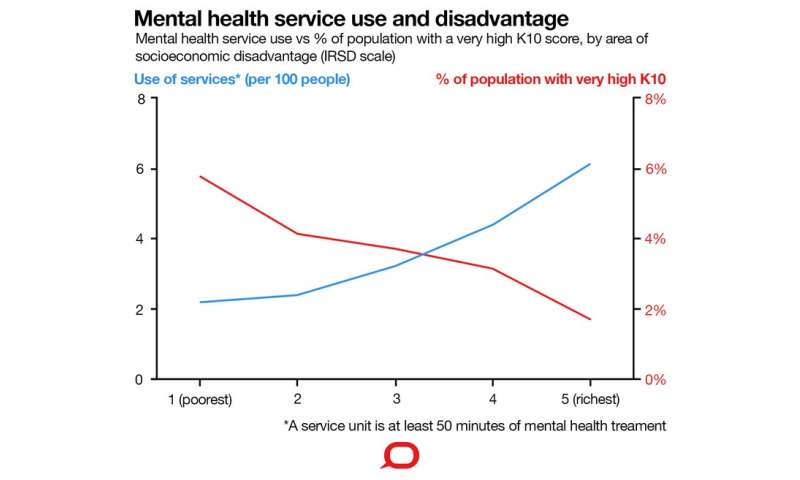 There are similar disparities, though differing in degree, for other Medicare-supported specialist psychological treatment services provided by different disciplines. GP mental health services, it is worth saying, are delivered somewhat more evenly.

Continued funding growth for mental health care is needed and welcome. However, we suggest more be done to ensure care gets to where it is needed most. This will not be simple: delivery models, mental health literacy, gap fees, funding and planning models all need urgent attention or reform.