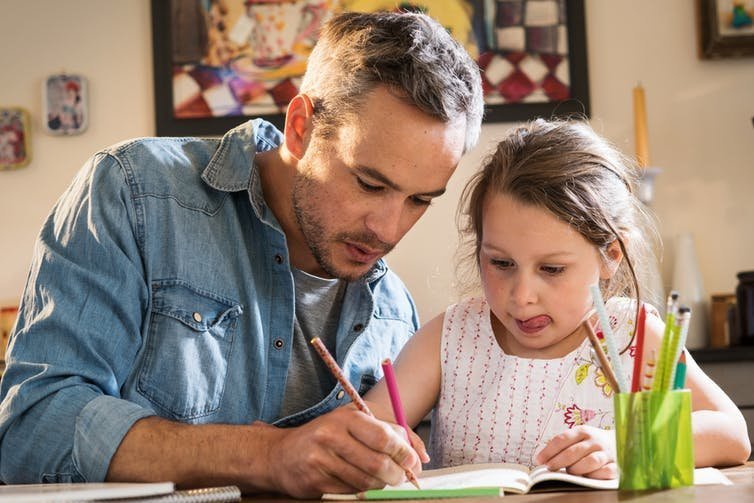 We know from new research that children whose mothers are depressed may respond differently to stress, have altered immunity and be at greater risk of psychological disorders. This work adds to the body of research showing children can be affected in negative and long-term ways by their mothers’ mental ill-health.

But what about dads?

Men’s mental health is more on the societal radar these days – but less so in terms of fatherhood. This area has been relatively under-researched. So how important is a father’s mental health to the way thier child grows and develops? Very important, as it turns out.

Dads have a powerful impact on their kids

Fathers’ mental health and the quality of their co-parenting relationships have a powerful impact on child development. Evidence shows fathers who are sensitive and supportive have children who develop better social skills and language, regardless of socioeconomic status, race and ethnicity.

Data from the Longitudinal Study of Australian Children show fathers who experience snowballing distress report being less consistent in setting and enforcing clear expectations and limits for their child’s behaviour, and show less warmth and greater hostility towards their children by the time the child is eight to nine years of age.

There is also emerging evidence to show supporting fathers’ mental health early in their parenting journey has positive effects on children.

We also know in order to thrive, develop well and sail relatively smoothly through to maturity, children need parents who feel confident, supported and equipped with the right skills to navigate the sometimes choppy waters of parenting.

It’s critically important we understand how both mothers and fathers are doing when it comes to mental health. For the sake of their own health and the well-being of their children.

Recent research conducted by the Parenting Research Centre sheds some new light on the mental health of Australian fathers. The research found one in five dads has experienced symptoms of depression and/or anxiety since having children. This includes nearly one in ten dads who report experiencing postnatal depression.

This may sound surprising, but it gives us reliable Australian data from the perspectives of a large and representative sample of fathers. It’s drawn from a new analysis of the Parenting Today in Victoria survey of 2,600 parents, 40% of whom were dads.

The proportion of dads reporting symptoms of depression and anxiety in this survey is lower than for mums (one in three). But the dads surveyed were less likely than mums to identify someone they trusted they could turn to for advice.

The dads were generally more positive than mums about the amount of support they received from their partner. But the fact many fathers are likely to be struggling with no clear view of where to get help should sound alarm bells.

Research on the co-parenting relationship (including for separated parents) shows the level of support parents provide each other through sharing everyday parenting responsibilities impacts child outcomes.

So, what can be done?

It’s important to note the majority of dads surveyed were doing well. In general, there’s a very positive overall picture of fathering in Australia. This contradicts out-dated assumptions fathers are less involved or less effective than mothers when it comes to child health and development.

But we can’t ignore the relatively high numbers of dads who aren’t travelling so well. This research highlights three key areas that will reap rewards for children if we focus on them now:

make it routine to address fathers’ as well as mothers’ mental health in services for new parents – this isn’t currently happening in maternal, family and child health services

offer support to parents around co-parenting and what it means to support each other, particularly those who are co-parenting across different types of family living arrangements to help them get on the same parenting page

work on ways to better engage dads in two areas: in parenting support services to give them strategies for parenting confidently and in early education settings and schools, where having both parents involved results in benefits for the child.

Research shows involving both parents in parenting programs rather than just one is more beneficial to children. We should consider what we know about dads’ motivations for attending or not attending parenting programs or education sessions (such as lack of time or feeling uncomfortable asking for help) and tailor strategies specifically to dads that take these into account.

Fathers tend to look for information and advice about raising their children online, rather than consulting professionals or attending group sessions. Some 76% of the dads surveyed said they went online for parenting information or advice. But many (around 66%) said they used books. Dads need access to credible parenting information in formats they can explore on their own terms.

The Australian government funded website raisingchildren.net.au has lots of evidence-based, dad-specific and general parenting information in the form of articles, videos and free webinars that can be viewed any time.

The University of Newcastle’s SMS4dads is a text messaging service which aims to check in with dads through their smartphone before and after the birth of their baby.

The Movember Foundation website has a section devoted specifically to mental health that encourages men to start a conversation about their own mental health and reach out for help and advice.

Beyondblue has a four-part web series called Dadvice, which follows four dads on their journey into fatherhood.

Health Direct, funded by the federal government and most Australian states, offers information on depression in men and where to seek help.