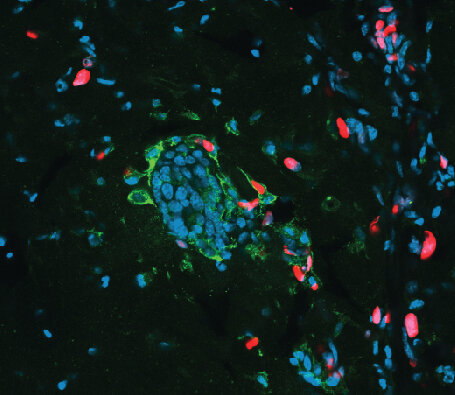 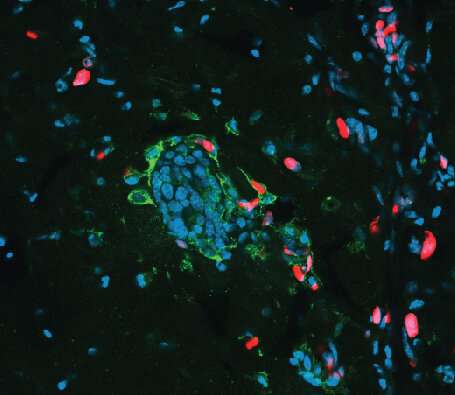 Researchers from the Tulane University School of Medicine have discovered that some cancer cells survive chemotherapy by eating their neighboring tumor cells. The study, which will be published September 17 in the Journal of Cell Biology, suggests that this act of cannibalism provides these cancer cells with the energy they need to stay alive and initiate tumor relapse after the course of treatment is completed.

Chemotherapy drugs such as doxorubicin kill cancer cells by damaging their DNA, but cells that survive initial treatment can soon give rise to relapsed tumors. This is a particular problem in breast cancers that retain a normal copy of a gene called TP53. Instead of dying in response to chemotherapy-induced DNA damage, these cancer cells generally just stop proliferating and enter a dormant but metabolically active state known as senescence. In addition to surviving chemotherapy, these senescent cancer cells produce large amounts of inflammatory molecules and other factors that can promote the tumor’s regrowth. Chemotherapy-treated breast cancer patients with normal TP53 genes are therefore prone to relapse and have poor survival rates.

“Understanding the properties of these senescent cancer cells that allow their survival after chemotherapy treatment is extremely important,” says Crystal A. Tonnessen-Murray, a postdoctoral research fellow in James G. Jackson’s laboratory at the Tulane University School of Medicine.

In the new study, Tonnessen-Murray and colleagues discovered that, after exposure to doxorubicin or other chemotherapy drugs, breast cancer cells that become senescent frequently engulf neighboring cancer cells. The researchers observed this surprising behavior not only in cancer cells grown in the lab, but also in tumors growing in mice. Lung and bone cancer cells are also capable of engulfing their neighbors after becoming senescent, the researchers discovered.