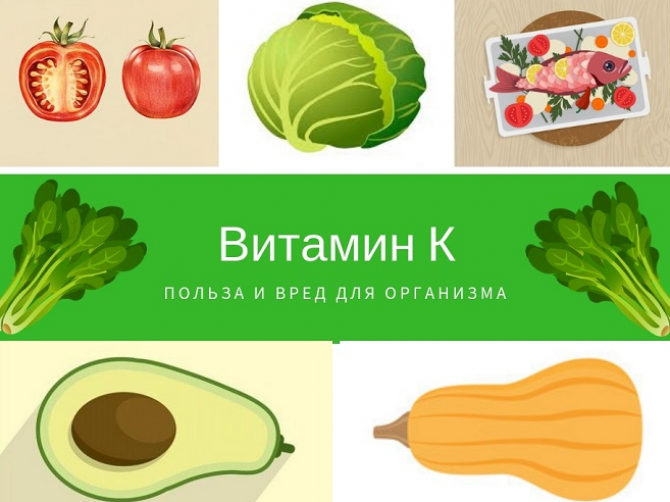 If the person has no medical training, you probably have not heard about this component of the body like vitamin K. But this is a very important component, which protects people against internal and external bleeding in injuries. Because of this its functions, vitamin K is often given to women during childbirth and newborns to prevent bleeding.

In this article we will look in more detail, which processes in the human body is affected by vitamin K? What causes the lack? And finally, what food contains vitamin K?

It turns out that vitamin K is a whole family of chemically related substances. Members of the family of vitamin K is traditionally called vitamin K1, vitamin K2, vitamin K3. But this is only a General, simplified terminology, as vitamin K is composed of many complex compounds.

All types of vitamin K fall into the category of chemicals called naphthoquinones. Within the category of naphthoquinones, there are two main types of vitamin K. the First type, called phylloquinones, is made by plants. The second main type is called as menaquinonesproduced by bacteria. (The only exception to this rule implies a group of bacteriaknown as blue-green algae that produce phylloquinones instead as menaquinones.)

What is the effect of products containing high doses of vitamin K on the human body?

That indicates a lack in the diet of foods containing vitamin K?

It will also be interesting:HOW to REPLENISH STOCKS of VITAMINS in the WINTER

Vitamin K could play a key role in:

Useful item can be found in many fruits and vegetables and some animal products.

Vitamin K is found in vegetables, berries and some foods of animal origin. People need to regularly replenish the supply of vitamin K, since it is a fat-soluble vitamin.

You will also be interested in:VITAMINS AND MENTAL stress What are the consequences of Vitamin K?

First, I should say that the excess of this substance to occur rarely. Overdose symptoms only become apparent with prolonged use of large doses of phylloquinone. But the shortage is quite real, because people often forget to eat the above foods.

Otherwise, the Outlook is not so rosy:

Normal, excess consumption of this component were noted. It is possible the abuse of medicines containing the synthesized vitamin K1. They may involve excessive sweating, poisoning and disorders of the stomach, tissue damage to the liver and even the brain. In identifying such symptoms should immediately consult a doctor. The overabundance of vitamin K

Normal, excess consumption of this component were noted. It is possible the abuse of medicines containing the synthesized vitamin K1. They may involve excessive sweating, poisoning and disorders of the stomach, tissue damage to the liver and even the brain. In identifying such symptoms should immediately consult a doctor.

As a rule, vitamin K is a fairly well preserved by food processing and storage. Some web sites warn that the freezing of some vegetables containing vitamin Timeet the potential threat of the loss of vitamin, but research does not document the risk. In fact, the vast majority of studies show that the range of values of vitamin K for fresh and frozen products varies by about 20-30%. Industrial processing is another matter. Especially in relation to fruits and their processing into fruit juices. There is evidence that the final product is deprived in large measure of vitamin K. while when preparing fresh juices at home, vitamin K lost to a much lesser extent.

It can be concluded that freezing and storing of vegetables and fruits, as well as their heat treatment does not cause significant loss of vitamin K. And a surplus of common standards will not lead to deterioration of health.

This is a very valuable component that only contribute to improving your health and well-being.

What a simple recipe can be prepared with this useful component?

Many people know that vitamin K can be found in foods such as parsley and cabbage, but few know that this important element still contains in chernytsya. Blueberry smoothie with banana and almonds:

Combine all ingredients and put in a blender, mix for 2 minutes, taste and feel like vitamin To enrich our body.