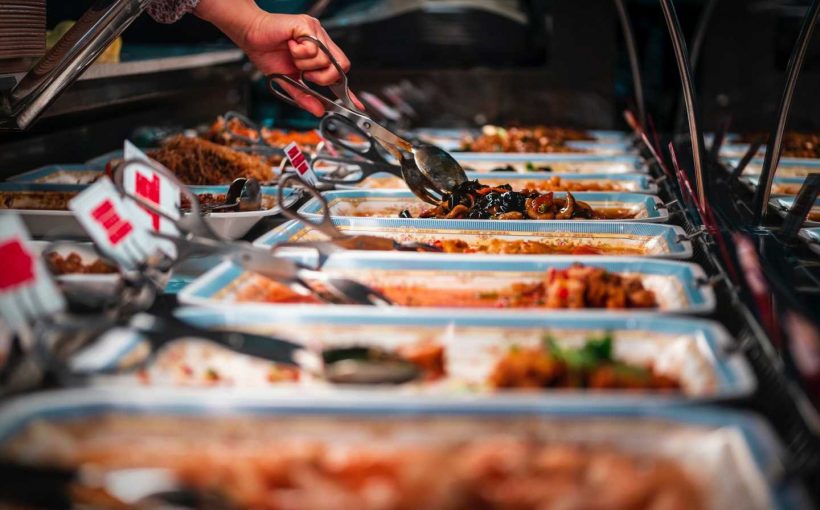 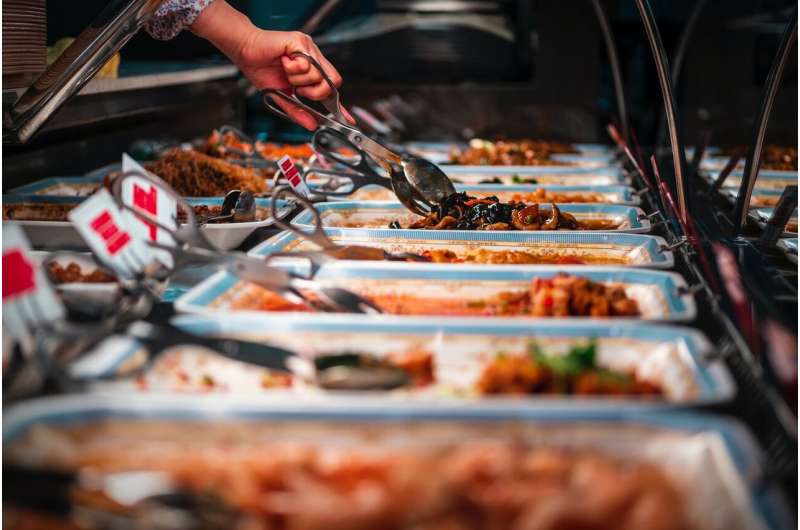 A new study from the University of Kansas in the journal Appetite examines people’s choices when confronted with an all-you-can-eat buffet.

It turns out that the food we choose to heap on our plates might predict our chances of having higher weight gain or obesity. The researchers focused on foods defined as “hyperpalatable”—dividing this category into carbohydrate and sodium (CSOD) foods or fat and sodium (FSOD) foods—and compared them with high-energy dense and ultra-processed foods.

“Hyperpalatable foods have combinations of ingredients that can enhance a food’s palatability and make a food’s rewarding properties artificially strong,” said lead author Tera Fazzino, assistant professor of psychology at KU and assistant director of the Cofrin Logan Center for Addiction Research and Treatment at the KU Life Span Institute. “Common examples would be various chocolates, hot dogs, pretzels or brownies—foods that can be difficult to stop eating.”

In the study, younger adults without obesity ate a meal at an all-you-can-eat buffet. The research team measured their body composition before the meal and followed up a year later. The study tracked associations between proportions of buffet items chosen by participants—high-energy density foods, ultra-processed foods and hyperpalatable foods—and participants’ weight change and percent body fat change one year later.

“We were able to look at their behavioral tendency to consume certain types of foods,” Fazzino said. “Is that associated with greater energy intake relative to their physiological energy needs, and is it longitudinally associated with weight and percent body fat gain?”

Fazzino’s co-authors were James Dorling, John Apolzan and Corby Martin of the Pennington Biomedical Research Center, Louisiana State University System. They shared the dataset that was analyzed for this study and collaborated on the article.

Fazzino and her colleagues found participants who consumed a greater proportion of hyperpalatable carbohydrate and sodium (CSOD) foods in their buffet meals had significantly greater weight change and percent body fat change at the assessment a year later.

“A couple of classic examples of hyperpalatable CSOD foods would be pretzels or popcorn,” Fazzino said.

But the study also found no significant body changes a year later for those in the buffet study who ate high proportions of fat and sodium hyperpalatable foods, high-energy dense and ultra-processed foods.

The researchers concluded eating more hyperpalatable carbohydrate and sodium foods at an all-you-can-eat buffet may indicate a tendency toward “hedonic eating,” which may boost a person’s risk for weight and body-fat gain in early adulthood.

“‘Hedonic eating’ is a general term that’s used in the literature to refer to eating that’s more focused on the rewarding characteristics of a food, as opposed to strictly satisfying physiological hunger,” Fazzino said. “The take-home point is really that people who tended to consume more carbohydrate and sodium foods—when they were freely available—were at greater risk for weight and body fat gain.”

However, some people don’t have a choice in eating hyperpalatable foods.

Fazzino’s new paper builds on research she co-wrote earlier this year in Frontiers in Psychology intended to discover how much babies are exposed to foods deemed hyperpalatable.

“If we think about how these foods can activate the brain-reward neural circuitry in a similar manner as some drugs of abuse, we want to look at the earliest point of exposure,” Fazzino said. “When babies start to eat tablelike solid foods—that’s what we were interested in. We wanted to know the earliest exposure point possible for these foods and the exposure rate among infants. Also, we wanted to characterize the prevalence of these types of foods in baby foods that are available in the U.S. food system.”

The researchers found an astounding 90% of 147 babies in the study were fed hyperpalatable foods, mainly because they’re being fed adult foods regularly. Moreover, 12% of foods marketed as “baby food” were found to be hyperpalatable in the study.

“We found when babies are starting to eat the adult foods, that’s the primary vehicle for their exposure,” Fazzino said. “We did characterize their overall caloric intake. For infants under 12 months, they consumed on average 38% of their daily food calories from hyperpalatable foods, and for older infants it was 52%.”

Because the prevalence of hyperpalatable foods among U.S.-produced baby food is relatively low, Fazzino cautioned parents should focus their attention on the adult foods offered to babies to head off potentially harmful eating habits that could take root in babies as they age.