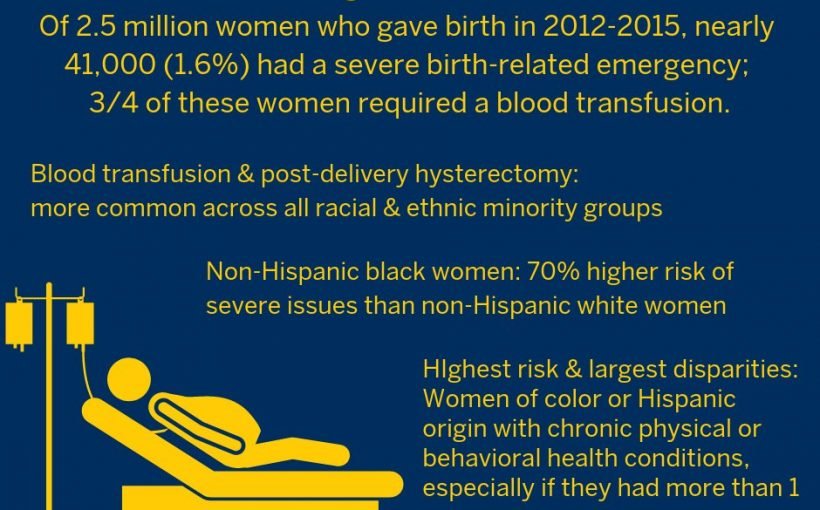 Tens of thousands of American women each year need emergency treatment to save their lives while they deliver their babies, or immediately after. A new study shows how much their risk of a life-threatening birth depends on their racial and ethnic background, and their underlying health.

In all, 1.6 percent of women faced such a situation. Women of color, and those of Hispanic heritage, had higher rates of severe birth-related health issues than non-Hispanic white women—even if they were otherwise healthy.

Women of any race or ethnicity who had a health condition like asthma, diabetes, depression or substance use issues before giving birth also had a higher risk of severe problems after giving birth. Women of color or Hispanic heritage who had two or more such conditions faced two to three times the risk of a severe birth problem.

The new study, published in the journal Obstetrics & Gynecology by a team from the University of Michigan, shines a detailed spotlight on the issue of what physicians call severe maternal morbidity.

Deaths among new mothers have received public attention in recent years, notes lead author Lindsay Admon, M.D., M.Sc. But far less data has been available on the far more common issue of birth problems that could have killed the mother if emergency care wasn’t given.

The new study focuses on 10 types of maternal morbidity. Blood transfusions, used mainly in women suffering a serious hemorrhage, were the most common. They accounted for three-quarters of cases and most of the racial disparity.

“Situations like these are often considered near-misses, and looking at them allows us to get a better picture of who the high-risk women really are,” says Admon, an obstetrician at Michigan Medicine’s Von Voigtlander Women’s Hospital and member of the U-M Institute for Healthcare Policy and Innovation.

“Celebrities like Serena Williams who have shared their birth-related emergency stories publicly have drawn the national spotlight to the urgent need to reduce racial and ethnic disparities in care for women around the time of delivery. To drive and target those changes, we need specific data like these.”

The findings have importance for health policy as well, because many births are paid for by Medicaid, using state and federal funds.

More about the study

The researchers used anonymous national data about hospital stays from 2012 to 2015, during which 40,873 women who gave birth underwent an emergency procedure or received a diagnosis of a life-threatening condition.

When calculating their rates of severe maternal morbidity, the researchers adjusted for factors like age, income, insurance source and rural/urban status that have already been shown to play a role in birth outcomes. They were not able to adjust for maternal obesity, another known health risk for birthing mothers.

The data in the study came from the National Inpatient Sample compiled by the Healthcare Cost and Utilization Project, part of the federal Agency for Healthcare Research and Quality.

Admon and her colleagues, including senior author Vanessa Dalton, M.D., M.P.H., note that this data source allowed them to look at severe maternal morbidity across racial and ethnic groups—including American Indians and Alaskan Natives, for whom little national data has been available.

In all, the researchers looked at data from more than 2.5 million birth hospitalizations across a four-year period—a representative sample of nearly 13.5 million total births that happened in the country from 2012 to 2015.

If the rates were extended to the entire population of women who had babies in the U.S. from 2012 to 2015, more than 218,000 of them would have suffered a life-threatening problem.

In addition to blood transfusions, they compiled rates of blood-clotting disorders, heart failure, hysterectomy during or following delivery, acute lung problems, kidney failure, eclampsia (seizures caused by high blood pressure), shock and sepsis. Disparities between whites and blacks of non-Hispanic backgrounds emerged in these non-transfusion conditions, too: 50.5 black mothers per 10,000 suffered one of them, compared with 40.9 white mothers per 10,000.

“Taken together, our findings shed light on women of color as a high-risk population for each of the problems examined occurring during delivery and immediately afterward,” says Admon. “Women of color who have multiple health conditions before they have their baby appear to experience a ‘double whammy’ effect, which should force us to think about how to structure care to best serve these vulnerable women, not only during pregnancy but before and after giving birth too.”

Targeting that effort in healthcare facilities that care for higher percentages of women of color should be a priority, she says. She also hopes to do more research on the longer-term health of newly delivered mothers, beyond the initial birth hospitalization, to understand patterns of health emergencies or “near misses” in the first year after birth.