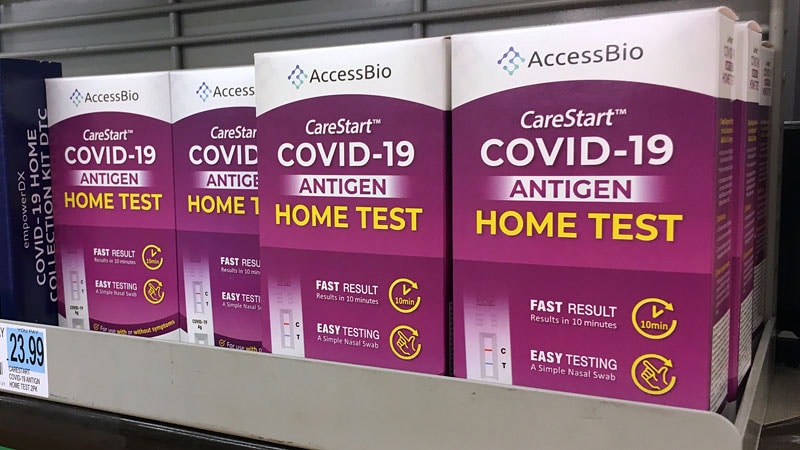 Some home tests for COVID-19 declined in performance when the Omicron variant emerged, a study published Wednesday in The BMJ, suggests.

They found that the sensitivities (ability to correctly identify a truly positive sample) of the three tests performed with nasal self-sampling decreased during the emergence of Omicron, from 87% to 81% for Flowflex, 80% to 73% for MPBio, and 83% to 70% for Clinitest. However, the decline was only statistically significant for Clinitest.

Only One Test Met WHO Bar

But even with both nose and throat samples, only one test — MPBio — met the World Health Organization’s (WHO’s) standards of at least 80% sensitivity and at least 97% specificity (ability to correctly identify a negative sample) among people with symptoms.

Trained staff gave all study participants a reference polymerase chain reaction (PCR) test and participants were then asked to complete a rapid antigen test at home as soon as possible, but within 3 hours of their test site visit. They then filled out a questionnaire.

The authors say that their findings indicate that people with symptoms can rely on a positive rapid antigen test result regardless of the variant they have, “while individuals with a negative self-test result should adhere to general preventive measures because a false negative result cannot be ruled out.”

“[M]anufacturers of rapid antigen tests should consider extending their instructions for use to include combined oropharyngeal and nasal self-sampling,” the researchers write.

Throat Tests May Not Be the Answer

However, Timothy Feeney, research editor at The BMJ, and Charles Poole, ScD, associate professor in the Department of Epidemiology at the University of North Carolina School of Public Health, Chapel Hill, write in an editorial that adding throat sampling to nasal testing is not the answer.

They point out that sensitivity increased only slightly, to 77.3% and 83%, when throat sampling was added.

“Specificities remained comparable with nasal sampling alone, at greater than 93%,” they note.

They also point out that the tests were inconsistent: MPBio had much better sensitivity when nose and throat were tested, whereas Clinitest’s improvement was less dramatic.

“No test, however, reached anywhere near the level of performance advertised by the manufacturers,” they write.

It’s also unclear, they say, how many at-home tests could be expanded to include nasal and throat sampling.

“In the UK and the US,” they write, “policies governing use of tests to enable a return to normal activities are confusing, poorly explained, and frequently change. In the US, a single negative test result currently allows an individual to return to work or school in many situations. In the UK, government guidance suggests that a negative result ‘means it’s likely you are not infectious.’ ”

Poole told the BMJ, “Given the less than ideal performance of antigen tests, updates to guidance in the public and private sector should take this into account when suggesting action based on test results,” according to a press release.

Additionally, people should consider their circumstances in deciding next steps after test results, the editorialists say, including whether they have COVID-like symptoms, have been exposed to an infected person, or have been in a high-risk indoor environment, or whether enough time has passed with the exposure to build up a high viral load.

Marcia Frellick is a freelance journalist based in Chicago. She has previously written for the Chicago Tribune, Science News, and Nurse.com, and was an editor at the Chicago Sun-Times, the Cincinnati Enquirer, and the St. Cloud (Minnesota) Times. Follow her on Twitter at @mfrellick.