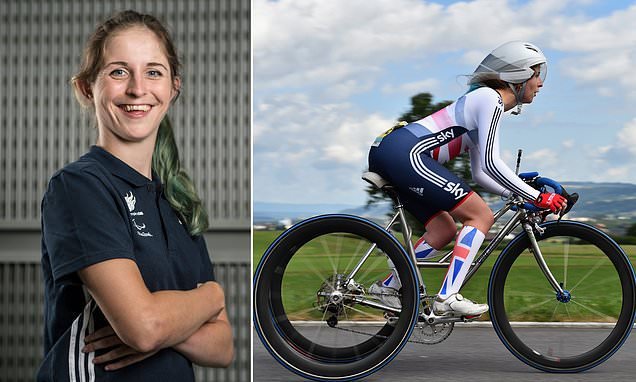 A Paralympic cyclist has revealed she needed two rounds of surgery on her vulva because it had become so damaged by saddles.

Hannah Dines, 25, said the constant pressure of leaning forward on a saddle led to  ‘huge swelling’ on one side of her genitals which she couldn’t get rid of.

After years of suffering, which have seen her progress to be the fourth best trike racer in the world, she says women in cycling have drawn the short end of the straw.

Ms Dines said women are left ‘sitting right on the money’ when men can move their genitals out of the way.

Her experience will no doubt be familiar to others – figures have shown rising demand for drastic surgery to remove parts of the vagina to make cycling more comfortable. 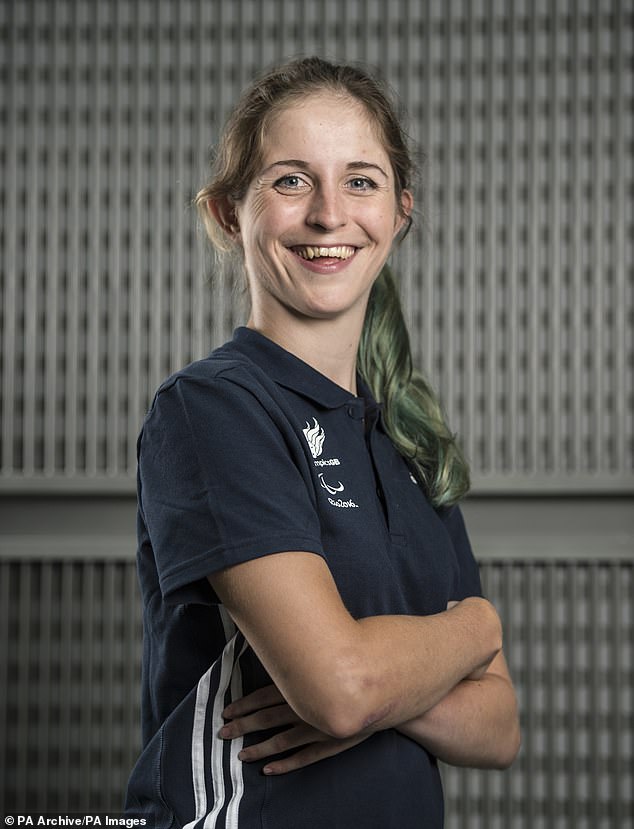 Hannah Dines, 25, revealed she has had to have surgery to remove a lipoma – a tumour of fat cells – from her vulva after repeated pressure from a bike saddle caused the growth to become ‘hard and massive’ 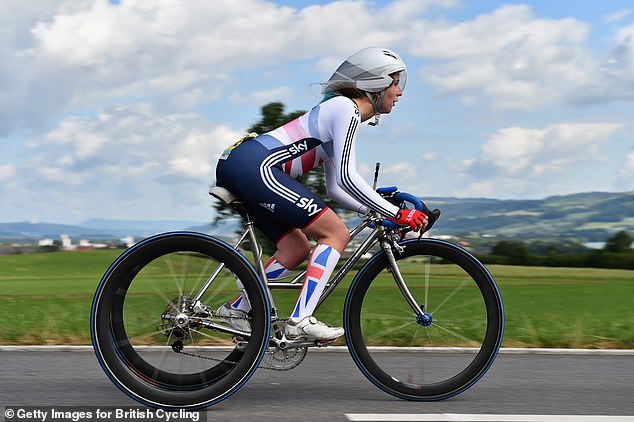 Ms Dines, who was born with cerebral palsy, is a Para-cyclist who has represented Team GB and came fourth in the world championships in 2015

Writing in a piece for The Guardian’s G2 magazine, Ms Dines revealed her surgeon likened the ‘long-term trauma’ to her vulva to what he had seen in patients who ‘compulsively rub up against bedposts’.

Ms Dines, born in Glasgow, has cerebral palsy and originally competed as a runner before switching to three-wheeled cycling in 2013.

She ranked fourth in the UCI Para-cycling Road World Championships in 2015, and came fifth in her category at the Rio Paralympics in 2016 riding for Team GB.

But the success has taken its toll on her body, leading to infections, saddle sores, ingrown hairs, open wounds and blisters – all on her genitals.

‘While valuable parts of the male genitalia can be moved out of the way, female cyclists sit right on the money,’ she wrote.

And part of the problem, Ms Dines said, lies in many saddles being designed for men and later adapted for women.

Alongside this, she said the female side of the sport isn’t taken as seriously – there is no equivalent Tour de France for women, for example, and not much research into conditions like hers, which mean treatments aren’t as good. 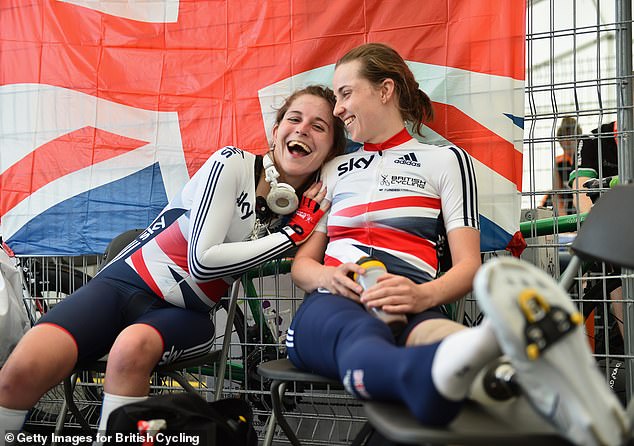 Ms Dines, pictured with para-cyclist Elizabeth Saul, said: ‘Having a vagina means having pain so maybe being a cyclist with a vagina means pain with a bit more pain added on top’ 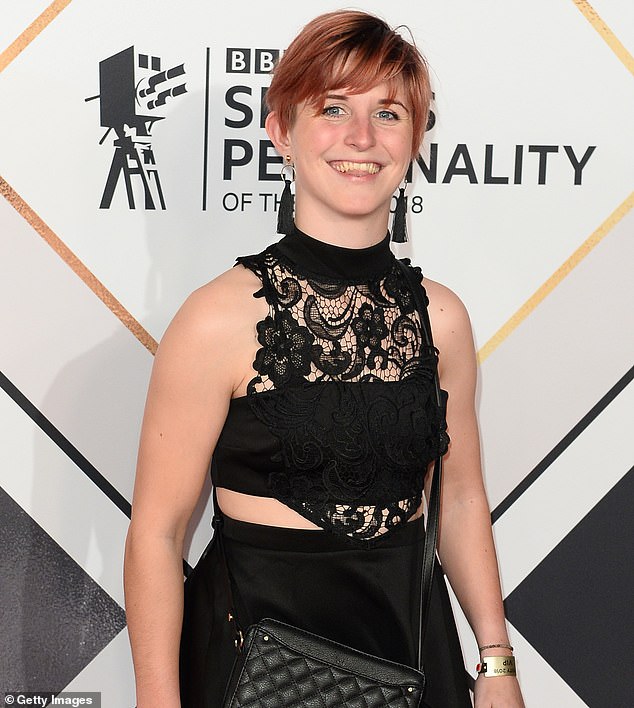 ‘Having a vagina means having pain,’ Ms Dines (pictured at the BBC Sports Personality of the Year Awards last year) said. She revealed the lipoma on one side of her vulva, which caused ‘huge swelling’, lasted for five years before she had it removed

HAS THERE BEEN A RISE IN DEMAND FOR FEMALE ‘SADDLE SURGERY’?

A rising number of women are having parts of their genitals removed to make cycling more comfortable, according to a Harley Street surgeon.

Surgeon Angelica Kavoumi told FEMAIL in 2016 the number of women asking for the ‘saddle surgery’ had risen from nine per week from three per week the year before.

The painful but ‘straightforward’ procedure involves cutting off part of the inner labia to stop them from rubbing or being pinched against the seat of a bicycle.

‘For most women, it is an issue of comfort,’ she explained. ‘It’s not about body image; it has more to do with sport and quality of life.’

When exposed to friction any protruding skin, she explained, can cause the tissue to become rough and bleed, and even lead to infections.

Women can choose between general and local anaesthetic, and the procedure requires an ‘initial recovery’ period of 10-14 days while the swelling and bleeding goes down.

‘In four to six weeks you can gradually reintroduce activities,’ Angelica said. ‘It will be up to eight weeks before it’s fully comfortable again.’

Also in 2016 the American Society of Plastic Surgeons revealed demand for labiaplasty had spiked 40 per cent, with members performing 12,000 of the operations – but it could not put a number on how many were linked to cycling.

Ms Dines developed a lipoma, a tumour made of fatty tissue, on one side of her vulva.

Lipomas are not cancerous but do grow over time and can become uncomfortable or get in the way.

Although the cause of them is not fully understood, scientists believe they could form as a reaction to blunt physical trauma if fat cells leak through damaged tissue.

Ms Dines, who trains six days per week, explained hers developed as a result of repeated pressure on her groin from the saddle.

It persisted for five years and, by 2018, had become ‘hard’ and ‘massive’ and wouldn’t go away.

She has had two operations to remove the growth in February this year, and had cancer tests to check it wasn’t dangerous.

Increasing numbers of female cyclists are experiencing groin problems inflicted by their hobby, research has shown in recent years.

A surgeon on Harley Street in London, Angelica Kavoumi, revealed in 2016 she was seeing rising numbers of women asking for ‘saddle surgery’.

This painful procedure, which can cost around £4,000-a-time, involves cutting off part of the inner labia to stop them rubbing and being pinched against the seat of their bicycles.

In the same year the American Society of Plastic Surgeons revealed demand for labiaplasty had spiked 40 per cent, with members performing 12,000 of the operations – but it could not put a number on how many were linked to cycling. 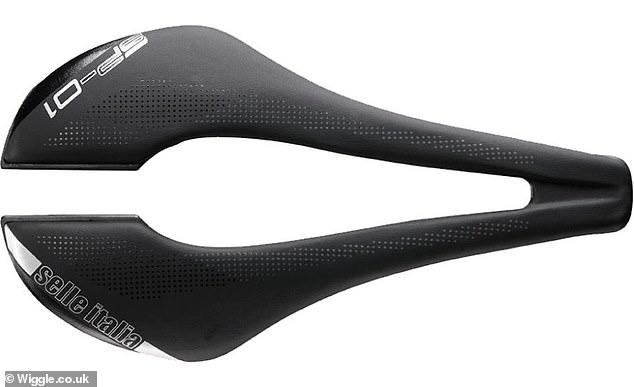 Some women’s bike saddles are developed to have a gap in the middle to divert pressure to areas around the vulva and reduce discomfort, but Ms Dines said leaning forward in a racing pose makes it difficult to avoid increasing pressure on the genitals

Ms Kavoumi said three years ago she noticed around nine women per week were asking for the ‘straightforward’ op, up from three per week a year earlier.

At the time she told FEMAIL: ‘For most women, it is an issue of comfort. It’s not about body image; it has more to do with sport and quality of life.’

‘When it comes to the inner labia, there isn’t a norm,’ she explained. ‘They can vary so much in terms of size and shape. Extra tissue can hang down unprotected, sometimes up to 3 or 4cm.’

When this skin is exposed to friction, Ms Kavoumi said, it can cause the tissue to become rough and bleed, and even lead to infections.

A study by scientists at Yale University in the same year found cycling more than 100 miles per week – not a lot for a professional cyclist – could damage the genitals.

Researchers found this level of exercise led to an increase in pain and numbness, and generalised ‘sexual dysfunction’ for some.

They also saw a lot of cycling could lead to recurrent thrush or urinary tract infections – their research was published in the Journal of Sexual Medicine.

Another study published in the same journal found that 60 per cent of competitive women cyclists suffer genital pain.

This may be because, according to Cycling UK, a woman’s vulva can bear as much as 40 per cent of their body weight when they’re cycling.

A blog post on Cycling UK states genital pain is ‘obviously’ more of a problem for pro cyclists because they spend more time in the saddle.

However, it said the problem does exist for some women even after ‘relatively short rides’.

And British Cycling says on its website: ‘Trauma and inflammation of the labial tissues is a fairly common issue in female riders.’

TIPS FOR FEMALE CYCLISTS TO LOOK AFTER THEIR INTIMATE PARTS

If you’re an avid cyclist suffering discomfort but don’t want to go under the knife, there are less drastic measures you can take.

In his book, Bike Fit, Phil Burt, head of physio at British Cycling, says investing in a decent padded cycle seats and padded shorts could help reduce the damage in the long-run.

It was once thought women need a wider saddle than men because their child-bearing able hips are further apart.

But a saddle can be too wide, causing chaffing on the inner thighs after a long ride, he explained.

Women often prefer cutaway or anatomic saddles with a hole carved out of the middle which aim to relieve pressure on their neither region.

But he said this can redistribute the pressure to the sides and make the pain there even worse, causing numbness.

He also said getting the saddle of your angle right is key – tip it slightly downwards if it doesn’t feel right after a good few miles.

Making sure your bike fits you properly and keep clean by making sure you wash your shorts after every ride is important too.