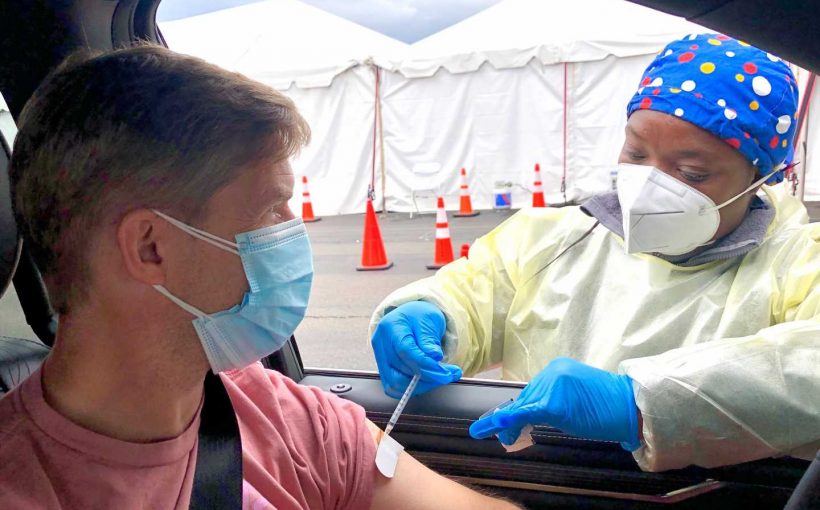 Notices taped to the windows and front door of the Stop Inn, a diner in Queens, made it clear the eatery would comply with the city’s new edict against the coronavirus: All patrons dining indoors at restaurants, browse works of art at museums or sweat it out at gyms must prove they have been vaccinated against COVID-19.

The signs at the Stop Inn went up Monday evening, said a server, to give customers due notice that on Tuesday it would begin complying with the city’s latest effort to curtail the spread of the virus, particularly the troublesome and more contagious delta variant that has fueled a surge in infections and hospitalizations across the country.

Norbu Lama, 17, said he was surprised when a server politely asked for his vaccination card soon after he slid into a booth with his parents and younger sister.

“We didn’t know we had to bring it,” he said. The server appeared relieved when Lama and his family presented copies of their vaccination cards on their phone.

The vaccination mandate, first announced two weeks ago by New York City Mayor Bill de Blasio, is meant to persuade more people to get vaccinated—or miss out on partaking of much of the city’s amenities, including restaurants, bars, gyms, public performances, museums and other cultural venues.

“We do not want to go back to restrictions,” de Blasio said during a virtual news conference Tuesday. “The key to our progress is vaccination.”

While the new rules went into effect Tuesday, enforcement won’t begin until Sept. 13.

New York City averaged 2,000 new cases of the coronavirus a day over the past seven days, up from around 200 a day in late June.

Michael Lanza, a spokesperson for the city’s health department, said a $10 million media campaign would also be launching Tuesday as part of the city’s visitor outreach, including ads on radio, television, subways and social media.

The mayor announced that about 100 vaccination sites will pop up at such places as gyms and the city would send out more than 600 canvassers to help in public outreach.

Andrew Rigie, executive director of the NYC Hospitality Alliance, said his group was fully behind the effort but acknowledged challenges.

“The City’s outreach needs to target education and training for establishments to implement these policies, as they pose operational and economic challenges for understaffed restaurants, bars, and nightclubs struggling to recover,” he said in a statement.

In return for the industry’s cooperation, Rigie called on the city and other levels of government to replenish financial aid to restaurants still struggling to recover.

A stroll through some New York City eateries on the eve of the new rules showed some restaurant staff were unaware they would soon be required to ask patrons to show proof of vaccination or be turned away.

But others were fully aware and still wondering how they would comply.

Restauranteurs like Leon Ellis, the owner of Chocolate, a restaurant in the city’s Harlem neighborhood, said the sacrifices need to made to keep the virus from wreaking more havoc on businesses like his.

“This COVID is a big deal. So we need to do everything that we can to make sure that we get it in check,” he said. “Whatever needs to be done to control this this spread, especially with this new variant. So I’m willing to do whatever it takes to make it happen.”

He says he is optimistic that customers will keep coming. “I’m thinking positively. I think most people in New York are responsible,” noting that New Yorkers know all to well the disruptions the pandemic has already wrought on their day-to-day lives. “New York went through the worst of COVID, and because of the guidelines that were put in place, we’re able to damp it down and control it.”

Ellis knows there are details he and his staff still need to work out to fully comply with the new rules, but he also knows enforcement won’t begin for several more weeks.