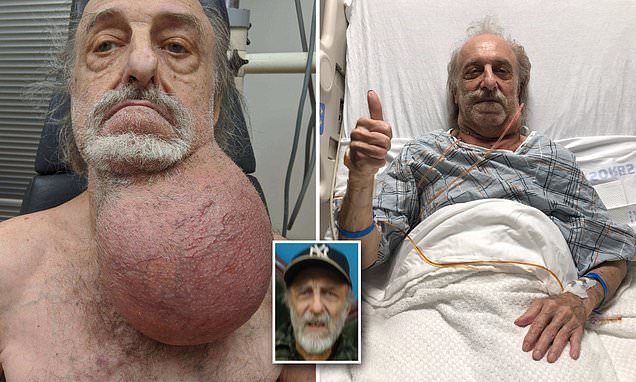 Retired electrician, 81, finally gets a soccer ball-sized tumor removed from his neck after two surgeons turned him away because the rare cancer’s location was so dangerous

A New Jersey man is recovering at home after undergoing an operation to remove a cancerous tumor the size of a soccer ball from his neck,

Milton Wingert, 81, a retired electrician from Journal Square, was diagnosed with pleomorphic sarcoma, a type of soft tissue cancer, six months ago.

The mass quickly grew from a tiny lump to one that measured nine inches wide.

Wingert approached two different doctors to remove the tumor, but both canceled the surgeries before they took place because the procedure was deemed too risky.

Finally, a doctor in New York agreed to perform the operation, fearing that if the tumor wasn’t removed soon, Wingert could suffocate to death. 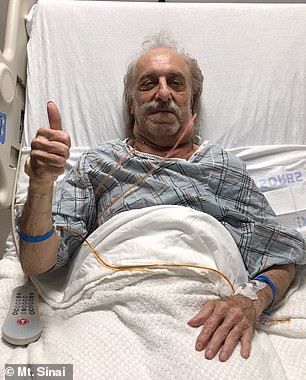 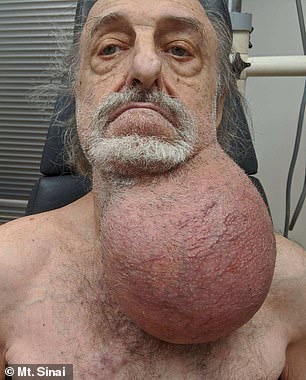 Milton Wingert, 81, from Journal Square, New Jersey, was diagnosed with pleomorphic sarcoma, a type of soft tissue cancer, in May. The tumor grew from the size of a ping pong ball to the size of a soccer ball in just six months. Pictured: Wingert after his tumor was removed, left, and before, right 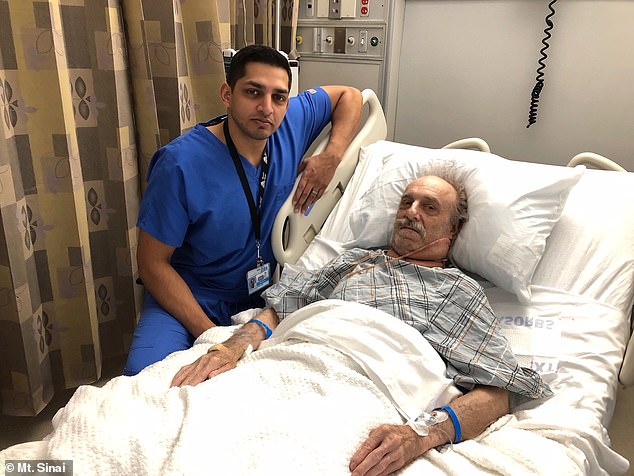 Two doctors scheduled surgeries, only to turn Wingert away at the last minute because the procedure was deemed too risky. Pictured: Wingert in the hospital, after his surgery, with Dr Nazir Khan of Mount Sinai

Wingert’s brother, Vern, told DailyMail.com that Wingert first noticed a lump on his neck, about the size of a ping pong ball, earlier in the same month he was ultimately diagnosed – May.

At first, Wingert thought nothing of it but, when the lump started to grow, he went to the doctor get it checked out. He was soon diagnosed with cancer.

Pleomorphic sarcoma is a soft tissue cancer that grows quite rapidly, often in a matter of weeks or months.

These sarcoma tumors most often occur in the arms or legs, but can spread to various areas of the body, including the lungs and liver.

The cancer is so rare that there are no clear numbers documenting its prevalence, but the American Cancer Society estimates that more than 12,700 soft tissue sarcomas will be diagnosed in the US in 2019.

Vern said that when his brother would go out in public, he’d often wear a handkerchief to cover up the tumor.

‘We could see kids pointing towards him like: “What’s this guy? What’s going on?”‘ Vern said.

‘Kids would make fun of him. But Milton responded very well to it.’

Five months ago, Wingert visited a doctor in Jersey City to schedule an appointment to remove the tumor, which was, at the time about the size of a small apple.

‘He showed up to the hospital and he was told at the hospital that the doctor had canceled the surgery because it was too risky,’ Vern said.

Then, in September, Wingert scheduled another surgery with a different doctor in Hackensack, but the procedure was canceled two days before it was supposed to take place.

Both surgeons were worried because the tumor had formed around the carotid artery, a major blood vessel in the neck that supplies blood to the brain, neck, and face.

If the artery was accidentally cut, Wingert would be dead.

The second doctor in Hackensack then reached out to Dr Nazir Kahn, a head and neck surgeon at Mount Sinai Hospital, who agreed to perform the surgery.

‘When I saw him, I thought: “He can’t live this way”,’ Dr Khan told DailyMail.com. ‘I thought: “He’s not going to survive much longer if we don’t get this removed.”‘ 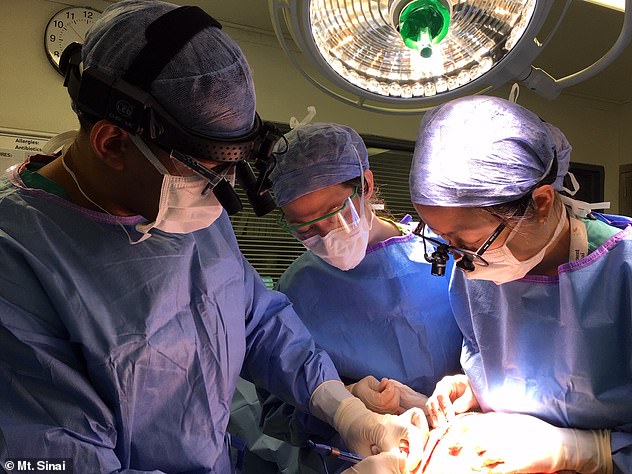 He is now recovering at home and will undergo chemotherapy and/or radiation after Christmas. Pictured: Surgeons performing the operation on Wingert

At this point, the tumor measured nine inches. The width was about the size of a soccer ball.

Dr Khan, who said this is the largest tumor he has ever operated on, said that if the tumor had continued to grow, Wingert could have suffocated to death.

The surgery, which was performed on November 5, took about seven hours. Dr Khan said he had anticipated having to perform neck reconstruction, but that it wasn’t necessary.

Wingert is now recovering at home, but will be facing chemotherapy and/or radiation after Christmas, either in late December or early January.

His brother says the experience has taught both of them to be their own best advocates when it comes to their health.

‘Be as proactive of a patient as possible,’ said Vern. ‘Be aggressive… and fight even if you meet roadblocks.’