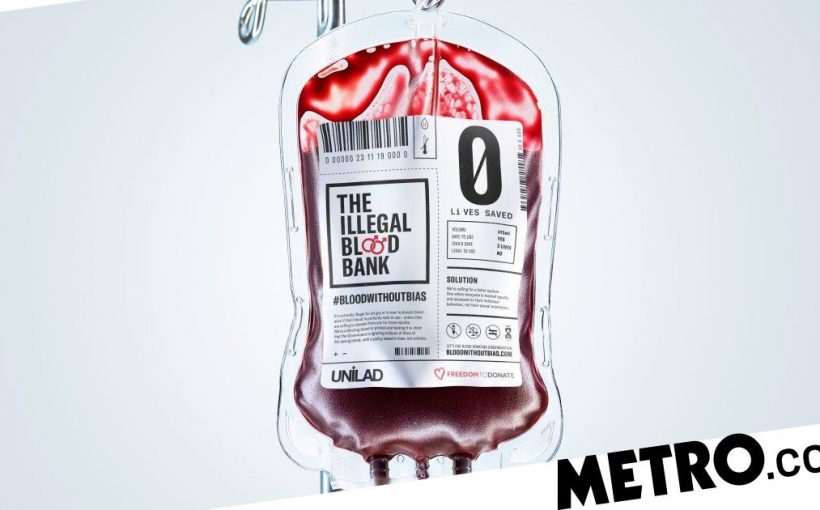 The world’s first Blood Bank for gay and bisexual men to donate blood is to be launched by FreedomToDonate and UNILAD later this month.

The Illegal Blood Bank will open in protest against the current law, which imposes a blanket ban on men who have sex with men from donating blood unless they abstain from sex for three months.

The organisations are campaigning for the government to revise what they see as outdated legislation and reduce discrimination in the blood donation system.

On Saturday 23 November, the Illegal Blood Bank will launch in a secret London location and aims to highlight how alternative methods for assessing donor eligibility can help to identify new, safe, eligible donors to meet the NHS demand.

With a 25% drop in men donating blood over the past five years and a 6% drop in women, the NHS requires 135,000 new donors each year to replace those who stop donating.

59,000 people have already signed FreedomToDonate’s petition to show their support for this change in law.

Campaigners say this is especially important around Christmas when it can be difficult for the NHS to maintain blood stock, as donations usually dip from mid-December to early January.

The NHS says that the three-month abstinence time-frame exists because, while all donations are screened, there is a small chance the tests they carry out to detect blood-borne viruses will not be able to pick up recently acquired infections.

But the campaigners argue that the blanket three-month deferral period for gay and bisexual does not take account of individual factors which impact risk levels for all donors.

‘For example, potential donors who … regularly test for STIs and blood-borne viruses could be eligible to donate based on their individual behaviour rather than categorising them as a homogenous group,’ reads the campaign statement.

‘Assessing individual factors in a risk-based approach whilst ensuring the safety of any blood that is donated could help ensure all people who can safely donate blood are able to.’

‘Our position is simple – anyone who can safely donate blood should be able to,’ says Ethan Spibey, founder of FreedomToDonate.

‘Through our collaboration with UNILAD, we’re aiming to raise awareness of the unfairness in blood donation on a huge scale and demonstrate the incredible potential of those thousands of gay and bi men who could potentially donate through an alternative model.’

Professional rugby player Keegan Hirst has also lent his support to the campaign and has pledged to donate when the blood bank opens.

‘There are still very few professional sportsmen and women who are openly gay,’ says Keegan.

‘People should be empowered to celebrate who they are but this won’t happen if there are policies in place, which discriminate against certain communities.

‘I’ll be donating blood at the Illegal Blood Bank in the hope it leads to gay and bisexual men who are safe to donate, being able to do so.’