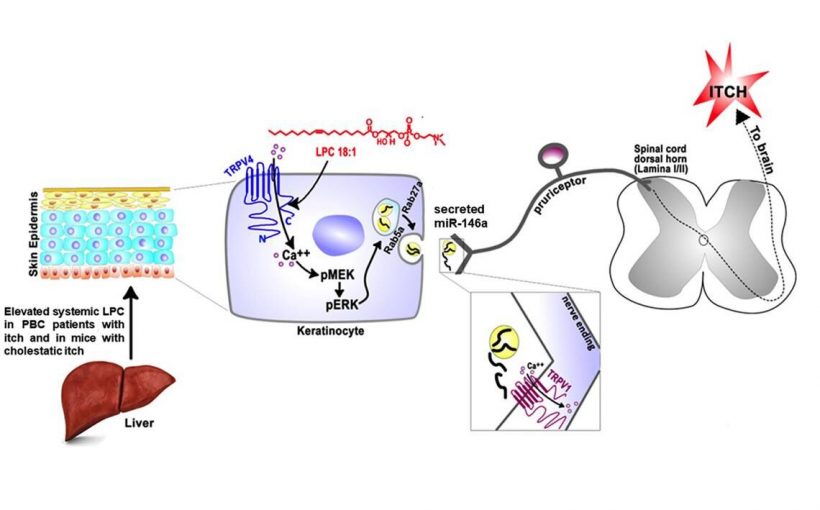 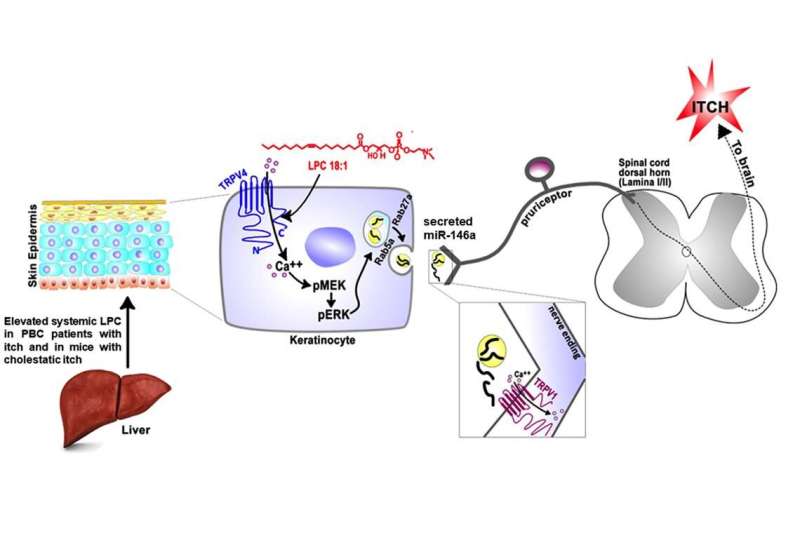 A devastating itching of the skin driven by severe liver disease turns out to have a surprising cause. Its discovery points toward possible new therapies for itching, and shows that the outer layer of the skin is so much more than insulation.

The finding, which appears April 2 in Gastroenterology, indicates that the keratinocyte cells of the skin surface are acting as what lead researcher Wolfgang Liedtke, MD Ph.D., calls ‘pre-neurons.’

“The skin cells themselves are sensory under certain conditions, specifically the outermost layer of cells, the keratinocytes,” said Liedtke, who is a professor of neurology at Duke School of Medicine.

This study on liver disease itching, done with colleagues in Mexico, Poland, Germany and Wake Forest University, is a continuation of Liedtke’s pursuit of understanding a calcium-permeable ion channel on the cell surface called TRPV4, which he discovered 20 years ago at Rockefeller University.

The TRPV4 channel plays a crucial role in many tissues, including the sensation of pain. It was known to exist in skin cells, but nobody knew why.

“The initial ideas were that it plays a role in how the skin is layered, and in skin barrier function,” Liedtke said. “But this current research is getting us into a more exciting territory of the skin actually moonlighting as a sensory organ.” Once a chemical signal of itching is received, keratinocytes relay the signal to nerve endings in the skin that belong to itch-sensing nerve cells in the dorsal root ganglion next to the spine.

“Dr. Liedtke and I had a longstanding interest in the role of TRPV4 in the skin, based on our previous collaborations we decided to focus on chronic itch,” said Yong Chen, and assistant professor of neurology at Duke who is first author on the study.

The researchers found that in a liver disease called primary biliary cholangitis (PBC), patients are left with a surplus of lysophosphatidylcholine (LPC) a phosphorylated lipid, or fat, circulating in the blood stream. They then demonstrated that LPC, injected into the skin of mice and monkeys, evokes itch.

Next they wanted to understand how this lipid could lead to the aggressive itching sensation. “If the itch comes up in PBC, it’s so debilitating that the patients might need a new liver. That’s how bad it can get,” Liedtke said. Importantly, the skin is not chronically inflamed in PBC, meaning there is debilitating itch in the absence of chronic skin inflammation.

The researchers found that when LPC reaches the skin, the lipid can bind directly to TRPV4. Once bound, it directly activates the ion channel to open the gate for calcium ions, which are a universal switch mechanism for many cellular processes.

But in this case, the signal does something surprising. The researchers followed a signaling cascade inside the cell in which one molecule hands off to another, resulting in the formation of a tiny bubble back on the skin cell’s surface called a vesicle. Vesicles are designed to bud off cells and carry whatever is inside them away.

In this case, the bubbles contained something surprising: micro-RNA, and it functioned as a signaling molecule. “This is crazy, because microRNAs are normally known to be gene regulators.” Liedtke said.

It turns out that this particular bit of microRNA is itself the signal that evokes the itch.

Once they had identified it as microRNA miR-146a, the researchers injected the molecule by itself into mice and monkeys and found that it immediately caused itching, not hours later, as it would if it were regulating genes.

“Future research will address which specific itch sensory neurons respond to miR-146a, beyond the TRPV1-dependent signaling that we have found, also its in-depth mechanism,” Chen said.

With the help of German and Polish liver specialists who have blood collections and itch data on PBC patients, the researchers discovered that the blood levels of microRNA-146a corresponded to itch severity, as did the LPC levels.

Knowing all the parts of the signaling that leads from excess phospho-lipid, LPC, to intolerable itching gives scientists a new way to look for advanced liver disease markers, Liedtke said.