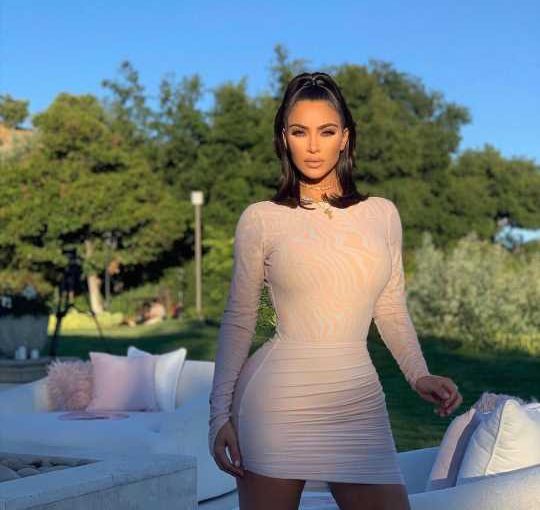 “Please explain to me how it’s possible,” Soare remarked, while focusing the camera on the mother of three, 38, who wore a form-fitting bronze dress.

“Oh come on,” Kardashian West replied, with a smile on her face.

“This waist!” Soare exclaimed, adding that while she’s known Kardashian West for many years, she had never seen the reality star’s body look like this.

“Did you remove your ribs?” she jokingly asked the mother of four, who explained that cutting out meat and dairy has definitely been a factor.

“I think that honestly being a vegan now helps,” Kardashian West shared, before turning around and examining herself. “It does look really small today.”

Kardashian West first revealed that she was changing up her eating habits in April 2019.

“I am eating all plant-based when I am home,” the KKW Beauty mogul wrote on her Instagram Stories at the time, alongside a photo of a sweet potato and avocado-filled meal.

Since then, the reality star has also revealed that she’s had all of her real animal furs remade into faux fur.

“Remember when I wore this!” she wrote alongside a photo of her daughter North West, 6, wearing a plush white coat that appears to be the one the reality star first wore to husband Kanye West‘s Yeezy season 3 fashion show in 2016.

“She picked out the same look lol but fun fact- I took all of my fave furs and remade them in faux fur,” Kardashian West added.

In a recent interview with the WSJ Magazine, the reality star admitted that she had “never felt pain like that in my life,” explaining that the custom corset was so tight, her back and stomach were covered with indentations at the end of the night.

The head-turning look was also criticized by some who accused Kardashian West of getting her ribs surgically removed in order to achieve such a distinct hourglass shape.

Dismissing the rumors, the reality star told WSJ, “I don’t even know if that’s possible.”

Kardashian West’s trainer Melissa Alcantara previously came to her defense by explaining that her client, who posts videos of her workouts on a daily basis, puts in a lot of effort at the gym.

“To make things clear 1. This dress is corseted BUT 2. Kim trains her ass off 6 days a f— week, she wakes up early af and is dedicated. 3. I paved the road for her but SHE did the work! I love compliments either way,” Alcantara said. “I don’t give a s— about your opinions on her body if you think she fake or not! I see her every morning, I see her train and I see her sweat and I see all the work she does outside of the gym and THAT is commendable!”